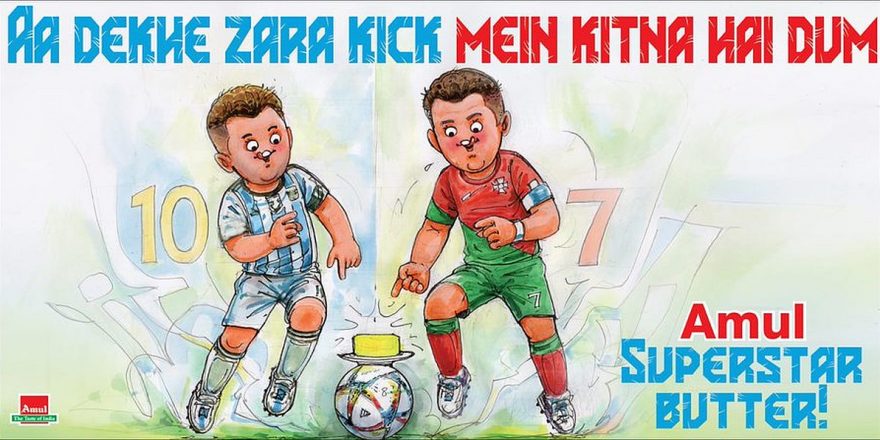 It is the season of cooking and baking, but with Amul Butter in short supply, consumers aren’t like the cat that got the cream.

A shortage only means market shelves without butter on them.

“There is a supply-side deficit.

“We are now able to procure only two packs of butter a day, as opposed to three packs (each containing 30 packets of butter) in a day,” says a salesman at Modern Bazaar, a departmental store in New Delhi’s Greater Kailash.

Similar instances have been reported from other parts of the city, with shopkeepers saying they can only get billing done once a day now.

Refusing to divulge capacity utilisation details, R S Sodhi, managing director of Gujarat Co-operative Milk Marketing Federation (GCMMF) that markets the Amul brand of products, says butter production was gradually being ramped up after a better-than-expected Diwali led to a surge in demand.

“While there were no hiccups in production and distribution, certain distribution centres did not anticipate the sudden demand spike, leading to temporary crunch, followed by further panic buying,” says Sodhi.

According to Statista, revenue in the Indian butter segment has been pegged at $6.86 billion this year.

According to industry sources, Amul’s daily milk procurement stands at roughly 27 million litres, while butter is at 150,000 tonnes per annum.

While the milk fat content in liquid milk ranges between zero per cent and almost 10 per cent, that of butter and ghee (clarified butter) is at 82 per cent and 100 per cent of the products, respectively.

In fact, 2021-22 had seen GCMMF’s flagship brand Amul Butter clock a 17 per cent growth, while the ghee business grew more than 19 per cent – both in value terms.

Commenting further on the shortage, Sodhi says the demand for all dairy products, led by liquid milk, was high during and after Diwali.

“Of all the milk fat generated from milk procurement, 60 per cent goes for liquid milk, the rest for other products, including butter.

“When demand for it rose, we reallocated milk fat for more milk production. As a result, we couldn’t quickly ramp up butter production at the same time.

“However, the shortage was short-lived and the situation is back to normal now,” adds Sodhi.

But consumers feel otherwise, finding it tough to get their hands on the brand’s butter packs.

Vendors and sellers on various e-commerce platforms are also experiencing a shortage of Amul products. An industry source says the shortage may be due to an outbreak of the lumpy skin disease that caused cattle deaths in many states.

As stakeholders wait for chinks in the supply-chain armour to be ironed out, restaurants are quickly switching to alternatives and products to replace Amul’s salted variant.

At Impresario, which owns and operates brands like Social, Smoke House Deli, and Mocha, the shortage has been pronounced.

At Olive Bar & Kitchen in New Delhi, the shortage has prompted a shift to a plant-based menu.

“In an effort to shift to healthier, gluten-free fats, we are using coconut fat in desserts. In sauces, we are using buttermilk,” says head chef Dhruv Oberoi.

Kabir Suri, president of the National Restaurant Association of India (NRAI), says the shortage is a countrywide phenomenon, adding that the NRAI has not taken any steps as yet to address the matter and is waiting to see how the situation evolves.

However, brand strategists and experts feel it’s a temporary blip and shifting brand allegiance is but a transitory phase.

“People who use butter will continue to use butter and Amul will only face temporary losses.

“It is an exceptional company and brand. People will move back to it once its supply resumes,” says Arvind Singhal, founder and chairman, Technopak Advisors.

“The brand is so overpowering. Any temporary scarcity won’t hit its perennial market share.

“When there is a shortage, its market share goes down and it bounces back.

“There is huge confidence in the brand.

“Any other player in the market is a distant No. 2.”