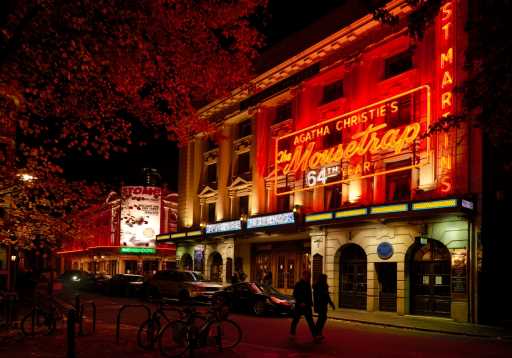 Agatha Christie’s stage thriller The Mousetrap, a London theater staple for 70 years, is finally ready for Broadway: The murder mystery will unfold at as yet undisclosed Broadway venue sometime in 2023, producers have announced.

The play, a West End institution and popular tourist destination since 1952, has been performed in the U.S. before but never on Broadway or in New York.

Although a new Broadway cast will be assembled for the production, some physical elements of the long-running London staging will make the crossing: In a message on the show’s official website, producers note, “New York audiences will be able to see and hear some of the original sights and sounds from the production as it has appeared in London since 1952. The set will be a loving recreation of Anthony Holland’s design, and for a truly authentic touch, the only surviving piece of the original set — the mantelpiece clock — will be loaned from the London production for the Broadway run. The unique backstage wind machine, imprinted with the original producer’s name and still used today, will also be shipped across the Atlantic.”

The play’s worldwide profile was recently raised through the movie See How They Run. Starring Saoirse Ronan, Ruth Wilson, Adrien Brody, David Oyelowo and Sam Rockwell, the Tom George-directed film mystery is set in 1953 and involves plans for a movie version of the then-new play that goes awry when a crew member (on the film within the film) is murdered.

Christie’s play premiered on November 25, 1952 at Nottingham’s Theatre Royal, and has since been performed in London nearly 29,000, with an estimated number of 10 million people seeing the play – and attempting to solve its twist-and-turn mysteries, since.

The Broadway staging will be a co-production between UK producer Adam Spiegel and American producer Kevin McCollum (Rent, The Play That Goes Wrong, Six).

“I am thrilled that Agatha Christie’s beloved murder mystery that changed popular theatre and has been a landmark attraction for US visitors to London’s West End for the past 70 years will now be coming to Broadway,” McCollum said in a statement. “I’m excited for the huge Christie fan-base in North America, and for the acting company in New York who will join the esteemed ranks of The Mousetrap alumni.”.

Spiegel said: “There can be no better way to mark today’s milestone in The Mousetrap’s illustrious run, than to look ahead to a production in New York. I feel after the longest out of town try-out in history, The Mousetrap is finally ready to transfer to Broadway!”

Additional details including casting and a production timeline will be announced later.

Amazon Commits $1B For 8-10 Theatrical Movies A Year: Here’s What It Means

50 Years Of Thanksgiving-Themed TV: From Charlie Brown To ‘Succession’