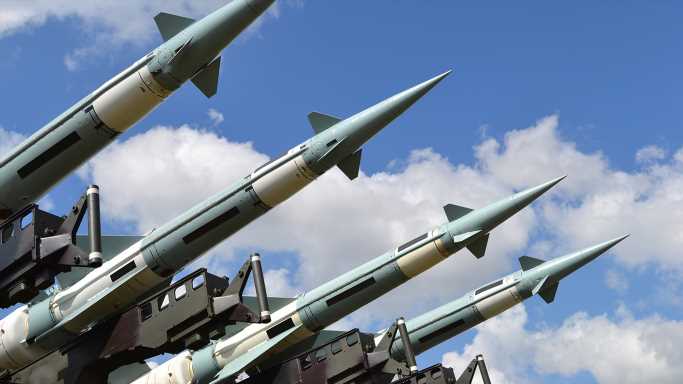 North Korea recently tested out its Hwasong-17, which is its most advanced long-range missile in its arsenal. The Hwasong-17 is an intercontinental ballistic missile, a weapon capable crossing vast distances to strike their target, often carrying a nuclear warhead. Many nations possess these powerful weapons, which are defined as weapons that can travel over 5,600 kilometers (about 3,500 miles), though many can deliver nuclear warheads at much longer distances. (This is the country with the most nuclear weapons.)

To determine how far the most powerful missiles can travel, 24/7 Wall St. reviewed data from the nonpartisan Arms Control Association, an organization that promotes effective arms control policies. Only operational missiles with ranges of at least 5,600 km were considered. Supplemental data came from the Center for Strategic and International Studies and the Federation of American Scientists.

The U.S., China, France, the United Kingdom, and Russia are the only countries known to have ICBMs that are fully operational. Other nations like North Korea and India are also improving their missile programs in anticipation of developing their own ICBMs as well. With Russia invading Ukraine, the world is in the perilous position of seeing a nuclear power at war. President Vladimir Putin warned that if any nation intervenes in the conflict, Russia would utilize “instruments … nobody else can boast of, and we will use them if we have to.” No nuclear weapon has been utilized since World War II, but if Russia were to strike Ukraine with such a weapon, the result could be catastrophic worldwide. This is what a nuclear war would do to the world.