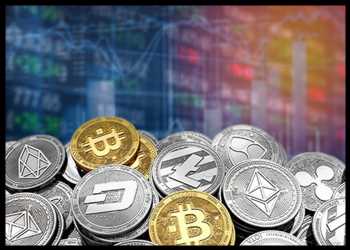 At current prices, Bitcoin is down 2.3 percent on an overnight basis and 49.6 percent on a year-to-date basis. On a weekly basis, BTC has gained more than 3 percent.
BTC had rallied to $24,822 on Thursday amidst the easing inflation and reports of BlackRock Inc., setting up its own Bitcoin Fund.

Ethereum has touched $1,887, up 0.16 percent on an overnight basis. At current prices, Ether is down 49.7 percent on a year-to-date basis. On a weekly basis, ETH has gained more than 13 percent.

Ethereum’s rally comes amidst reports that the protocol’s transition to Proof of Stake from Proof of Work would now take place on September 15. The proposed date is at least three days ahead of Sep. 19, the date earlier predicted by Ethereum developer Tim Beiko. The Merge is expected to happen when the Total Terminal Difficulty (TTD) hits 58750000000000000000000. The TTD is in other words the total difficulty required for the final block that would be mined before the transition to PoS.

In another development, Rune Chirstensen, the founder of MakerDAO has urged members to “seriously consider” preparing the depeg of the DAI stablecoin from the U.S. Dollar, CoinGape has reported. Dai (DAI) ranked 14th overall and 4th among all stablecoins currently commands a market cap of $7.4 billion.

Meanwhile, BlockchainNews has reported that crypto mixer Tornado Cash which was recently banned by United States Treasury Department’s Office of Foreign Assets Control (OFAC) has seen an 80 percent decline in the total deposits on the platform.