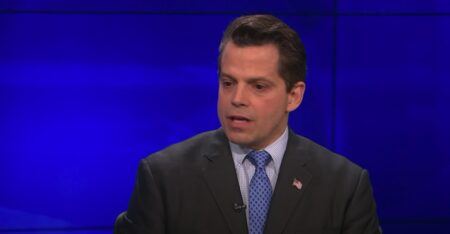 On Wednesday (February 17), former White House Director of Communications Anthony Scaramucci, the founder of global alternative investment firm SkyBridge Capital, gave his firm’s price target for Bitcoin and explained why they were so bullish on Bitcoin.

On January 4, Skybridge announced “the launch of the SkyBridge Bitcoin Fund LP, which provides mass-affluent investors with an institutional-grade vehicle to gain exposure to Bitcoin.”

The press release went on to say:

“Additionally, on behalf of its flagship funds, SkyBridge initiated a position, valued at approximately $310 million at the time of this release, in funds investing in Bitcoin during November and December 2020.“

Well, yesterday, during an interview with Andrew Ross Sorkin on CNBC’s “Squawk Box”, this is what Scaramucci had to say about Bitcoin:

“The thing is volatile… I want to be cautious with individual investors, but we like it. We have over a half a billion dollars in Bitcoin right now, and obviously our Bitcoin fund started in December — it’s done quite well –but be cautious… I do think we see a hundred thousand dollars in this coin before year end. It’s just a supply-demand situation, and you don’t have a lot of supply out there and very heavy demand.“

Here is what he said about Bitcoin:

“And what I would say to money managers that are listening, you’re going to be benchmarked off of Bitcoin, meaning in your mosaic of stocks and bonds and alternatives and gold, they’ll be a few percentage points related to digital currency and since Bitcoin is the winner of that battle, it’ll likely be Bitcoin. And so if you’re not going to be an investor in Bitcoin, you’re effectively short Bitcoin for the purposes of that evaluation…

“Expect volatility. Invest in Bitcoin at the size and scale of money that you don’t need in the short term, but Ido think it has a very big future…“

He was also asked if it was responsible for publicly-listed companies like Tesla to put Bitcoin in their balance sheet.

“So I think the dilemma for those companies is fiat currency. They’re watching the American government produce dollars at an alarming rate. We have 23.6% more dollars in production and in our money supply than we did six months ago. And if you really analyze the $1.9 trillion stimulus, it’s very likely that we’ll get another 17% more dollar production.

“So you’ll be sitting here in a 12 month period of time. You’ll have 40% more dollars or 40% more fiat currency. And so if you’re lookingat dollars in your bank account… you could be saying to yourself, ‘okay, I’m losing value in dollars, but I’m not necessarily losing value in Bitcoin because of its scarcity’.“