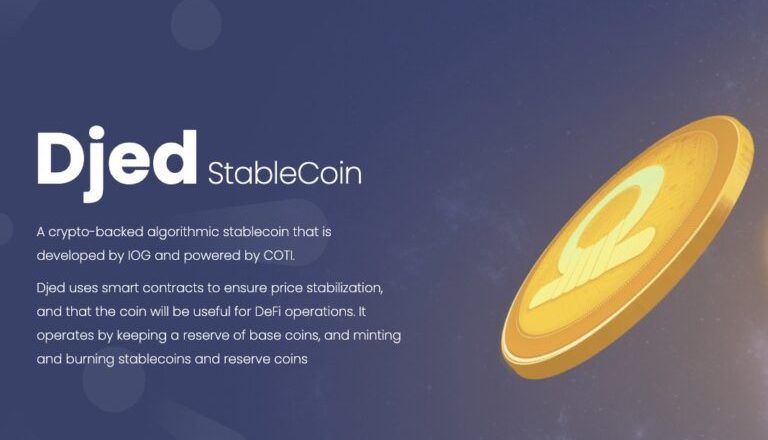 Fintech startup COTI the issuer of the algorithmic stablecoin Djed ($DJED) that’s set to be launched on the Cardano network, has announced that the cryptocurrency will go live next week.

Djed is a formally verified algorithmic stablecoin for Cardano that is backed by cryptocurrency, IOG, the company behind the development of Cardano, designed the stablecoin, while COTI Group is responsible for issuing it. The stablecoin was announced back in September 2021.

Djed’s use of smart contracts ensures price stabilization. Djed can be useful in decentralized finance (DeFi). It works by “keeping a reserve of base coins, and minting and burning stablecoins and reserve coins.”

The stablecoin, according to its documentation, acts as an autonomous bank that “buys and sells stablecoins for a price in a range that is pegged to a target price,” and is crypto-backed “in the sense that the bank keeps a volatile cryptocurrency in its reserve.”

The reserve is then used to buy stablecoin from users that want to sell them, and the revenue from stablecoin sales is stored in the reserve. To avoid a collapse similar to the one of the Terra protocol last year, Djed has an overcollateralization mechanism, meaning users have to pledge more than 400% in collateral to mint Djed.

The stablecoin is set to go live on over 40 Cardano-based decentralized finance (DeFi) applications on launch. Developers have also created DjedPay, a payments application that uses the stablecoin and allows users to transfer the tokens to merchants.

Meanwhile, holders of SHEN, a reserve token meant to support Djed’s stability, are set to receive extra rewards when Cardano holders stake their coins to mint the stablecoin.

As CryptoGlobe reported, popular and respected Cardano influencer “ADA whale” has recently said there is “an insane amount of cool stuff” coming to Cardano and its ecosystem. Some of the projects being built on Cardano include algorithmic stablecoin $DJED, fit-backed stablecoin $USDA, and stablecoin decentralized exchange TeddySwap, among others.

Earlier this month, Cardano’s market cap surpassed that of popular meme-inspired cryptocurrency Dogecoin ($DOGE), at a time in which $ADA has been recovering from its second-largest drawdown ever.