A lettering offering the Covid-19 vaccine arrived at the door of one Britain’s oldest twins just two days after she died.

Doris Hobday, 96, was described as a ‘ray of sunshine,’ this morning after news of her death was announced on Good Morning Britain – where she shot to fame beside her twin sister Lil Cox after saying the secret to their old age was ‘plenty of sex’.

Today her family have revealed Doris died after a two week battle with Covid-19, with a letter offering her a jab arriving at her home in Tipton, West Midlands, just two days after she died.

In a statement, the family said: ‘Doris was only a few weeks away from being safe, with her vaccine letter arriving two days after her death. If you are offered the vaccine, please take it, do not refuse it. Doris did not get this choice.’ 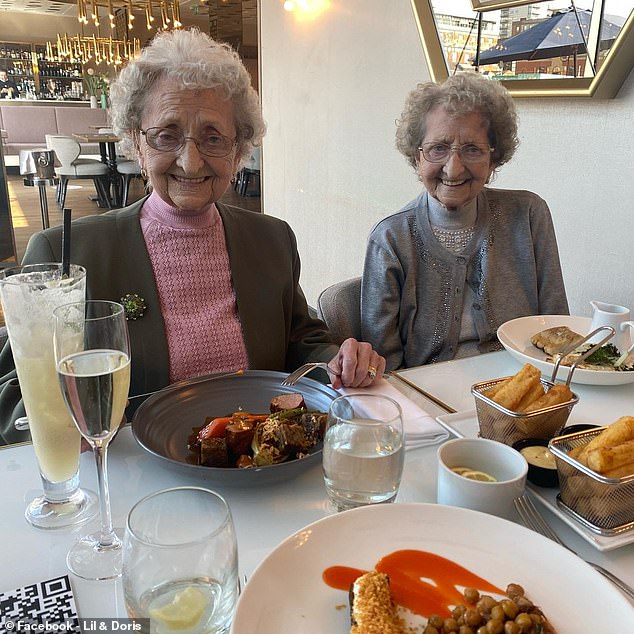 Doris and Lil shot to fame last year after saying ‘plenty of sex,’ was the secret to their long lives

They added: ‘We are aware they’re both 96-years-old and we’ve been so lucky to have them in our lives for such a long time. But they were both still going strong before this virus got them and both were determined to live until 100.

‘They had so much to live for, it’s just so cruel that Covid has stopped Doris like this. Our thoughts go out to all the families who have experienced a loss through Covid and we urge people to take this seriously.’

Twin sister Lil is ‘battling hard,’ after contracting the virus and was pictured on GMB reading a copy of Piers Morgan’s book ‘Wake Up’. 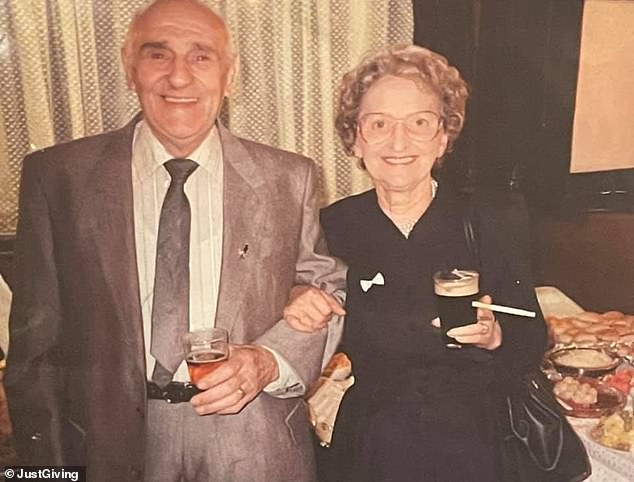 Doris Hobday, pictured with her husband Ray, died on January 5 after battling Covid-19 for two weeks. Doris, from Tipton, West Midlands, made up one half of Britain’s oldest twins. Her family revealed the 96-year-old received a vaccine letter two days after she died 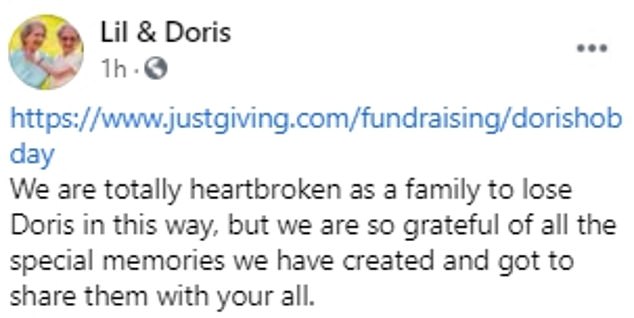 The presenter paid tribute today, saying: ‘It’s a very sad day for her family and also particularly for Lil and also for all of us here at Good Morning Britain because they brought such a ray of sunshine to our lives during the first wave of this pandemic with their affectious humour, great laugh and cheekiness.’

Describing the family’s tribute as ‘incredibly moving,’ Susanna Reid added: ‘Doris Hobday passed away on Tuesday the 5th of January. She will be laid to rest with her husband who she lost 11 years ago.

‘They were married for 65 years and her funeral is taking place on Monday 15th of February.’

The family have asked for donations, instead of flowers, to the The Beacon Centre for the Blind, setting up a fundraising page for the public.

The duo had previously been guests on This Morning, where they discussed becoming social media sensations after joining Facebook in 2019 and amassing 20,000 viewers, and left the nation laughing when they admitted they sometimes wear their drawers inside out.

They made a second appearance on This Morning in September and had viewers in stitches when Lil declared she’d turned down a proposal because she wants ‘an old man, about 98, with about six months to live and a big fat cheque book’.

The twins announced they had tested positive on Facebook earlier this month, writing: ‘We have said in the past if him up there wants us…. he’s going to have to run fast! 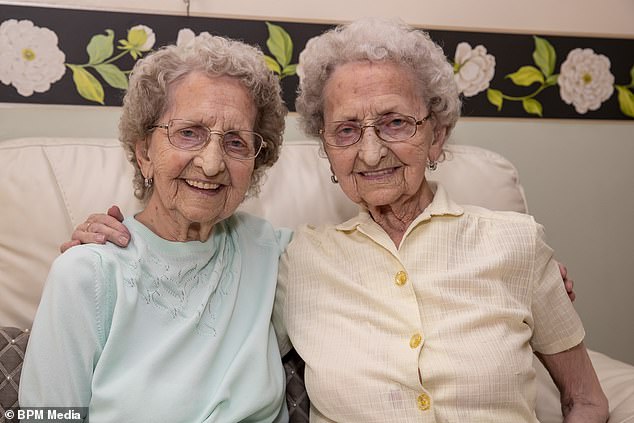 Doris and Lil were ‘determined,’ to make it to 100 together, family revealed today, following the death of Ms Hobday earlier this month

‘We took a routine Covid test just before Christmas and it was negative. We have both stayed in over the Christmas period to keep safe and was lucky to have each other for company.

‘A few days ago Doris had a high temperature and Lil had a cough, so we took a 2nd test and unfortunately the results came back positive.

‘We are both in shock…we have been inside for most of 2020 sticking to all the rules and being careful, now this has happened and we can’t work out why or where we’ve picked it up from.’

They went on to beg people to take the virus seriously, adding: ‘COVID is real and it’s affecting so many lives across the world…don’t let it affect yours or your families.

‘We are running faster than ever because we both aren’t ready yet… we still haven’t met Jason Statham!’