Utah mom, 12-year-old son among 3 killed in shooting by neighbor in Nevada

A Utah mom and her 12-year-old son were among three victims shot dead in Nevada by their upstairs neighbor, who was killed after he took the boy hostage in a car during a standoff with police on Tuesday, authorities said.

Police responded around 11 a.m. to reports of gunshots and “a subject down in the doorway” at an apartment complex, Henderson police said. Officers found the bodies of two women, ages 39 and 33, and an injured 16-year-old girl. All three had apparent gunshot wounds.

Officers located the suspect, identified as 38-year-old Jason Neo Bourne, armed with a handgun and barricaded inside a nearby vehicle with the 12-year-old boy. 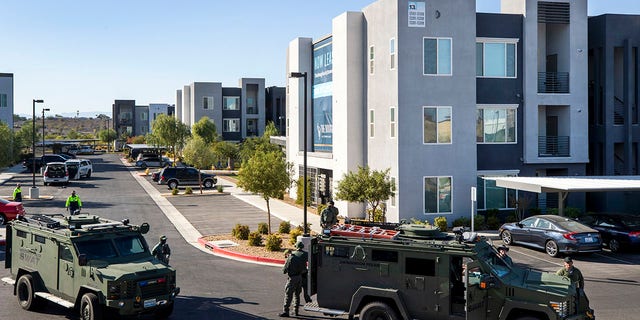 Henderson Police officers and SWAT vehicles are shown at the scene of a fatal shooting in an apartment complex in Henderson, Nevada.  Four people were killed including the suspect in the shooting, police said. (Steve Marcus/Las Vegas Sun via AP)

“As officers attempted a de-escalation dialogue with the suspect, the suspect held his firearm to the juvenile’s head, resulting in an officer-involved shooting,” police said.

Officers attempted to save the boy's life, but he died at the scene along with Bourne, police said. No officers were injured.

Investigators determined that Bourne likely fired multiple rounds inside the vehicle that he lived in the apartment above the victims, police said.

Henderson police did not immediately identify the victims, but a Utah church identified two of them as Diana Hawatmeh, a 39-year-old mother of three, and her 12-year-old son Joseph.

“Diana was a substitute teacher in our elementary and middle school and taught Zumba dance to members of our faculty,” the church and schools in the community posted on Facebook.

The church said the 16-year-old was Hawatmeh’s daughter Yasmeen. She was rushed to an area hospital. Galey Colosimo, principal of Juan Diego Catholic High School where she is a student, told the Deseret News that she had undergone surgery and was in serious condition. 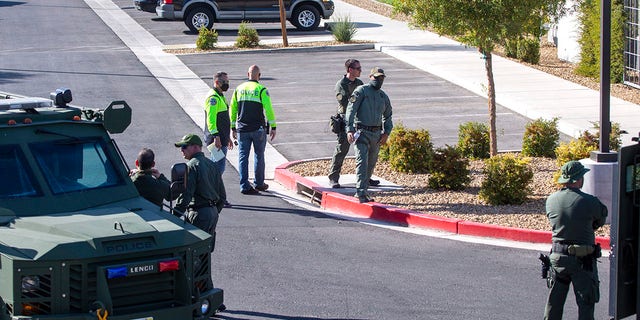 Henderson Police officers are shown at the scene of a fatal shooting in an apartment complex in Henderson, Nevada. (Steve Marcus/Las Vegas Sun via AP)

The identity of the 33-year-old woman has not been released.

Hawatmeh’s husband and eldest son were not involved in the shooting.

The family split time between their home in Sandy, Utah, and Henderson to be near family, FOX13 Salt Lake City reported.