The Gulf Coast braced Sunday for a potentially devastating hit from twin hurricanes as two strong storms swirled toward the U.S from the Gulf of Mexico and the Caribbean.

Officials feared a history-making onslaught of life-threatening winds and flooding along the coast, stretching from Texas to Alabama.

A storm dubbed Marco grew into a hurricane Sunday as it churned up the Gulf of Mexico toward Louisiana. Winds are forecast to hit Louisiana by as early as 2am Monday morning.

Another potential hurricane, Tropical Storm Laura, lashed the Dominican Republic and Haiti, and was tracking toward the same region of the U.S. coast, carrying the risk of growing into a far more powerful storm.

Laura has already killed at least seven people in the Dominican Republic and Haiti including a mother and her 7-year-old son.

The storm left more than a million in the country without electricity, forced more than a thousand to evacuate and caused several homes along the Isabela River to collapse, authorities said.

As of Sunday night, it is forecast to hit Louisiana by 8pm Tuesday. 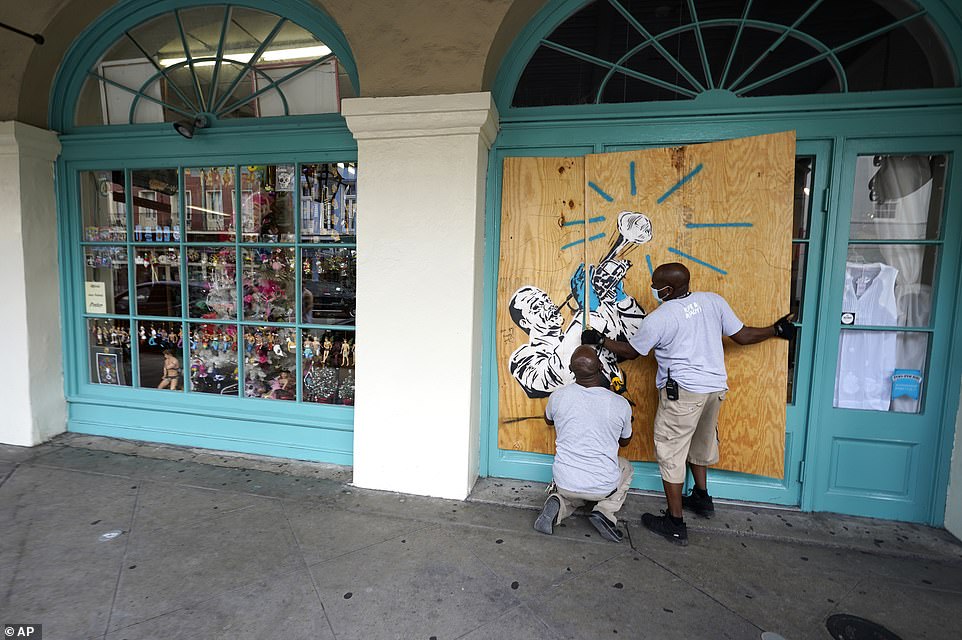 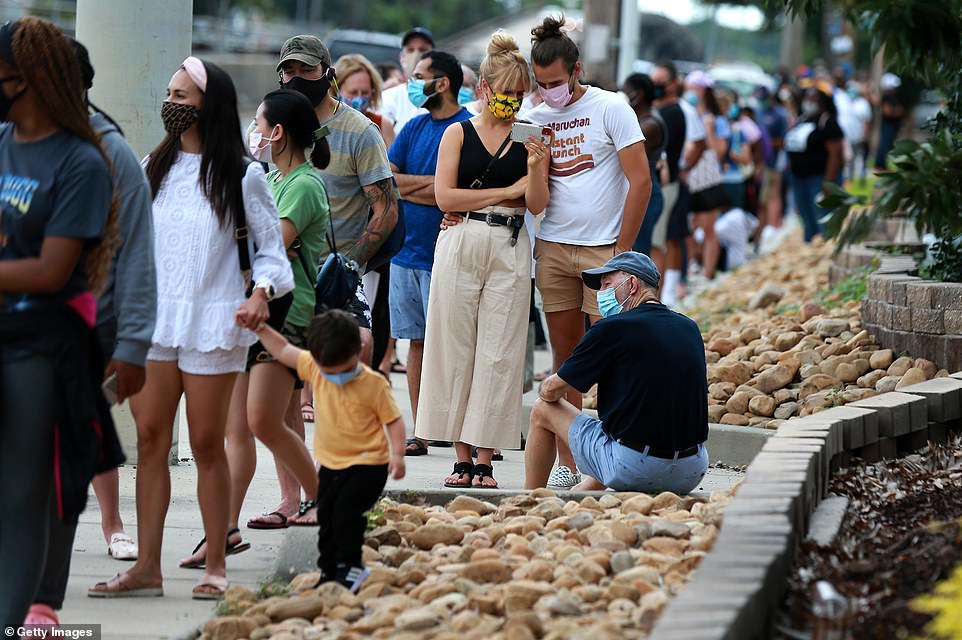 People stand in long lines before entering Costo to pick up supplies as they prepare for Hurricane Marco and Laura in Louisiana. The Gulf Coast braced Sunday for a potentially devastating hit from the twin hurricanes 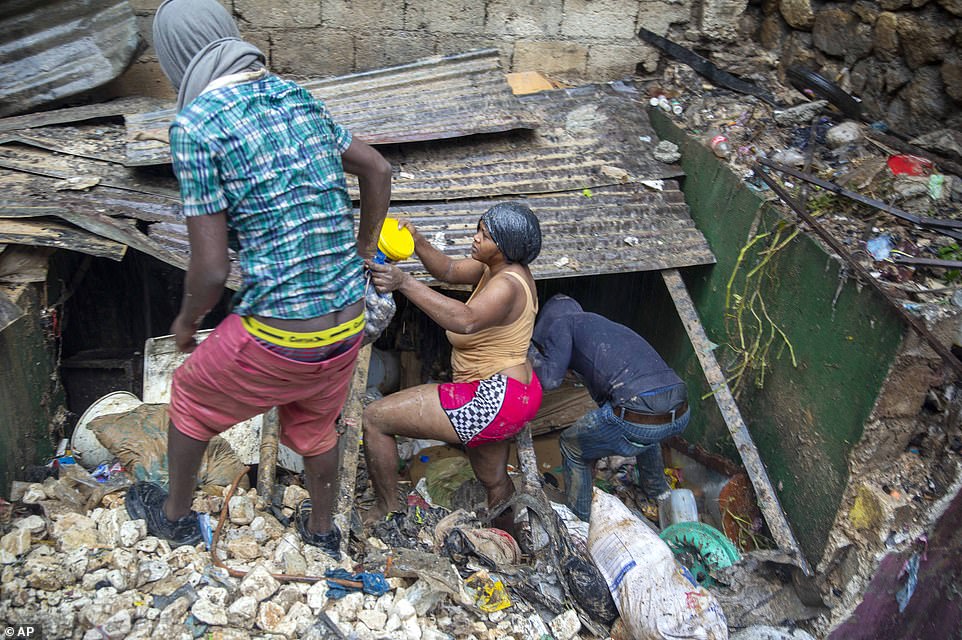 Residents look for salvage items next to the Tet Dlo river after the passing of Tropical Storm Laura in Haiti. The storm has already killed at least seven people in Haiti and the Dominican Republic as it heads toward the United States 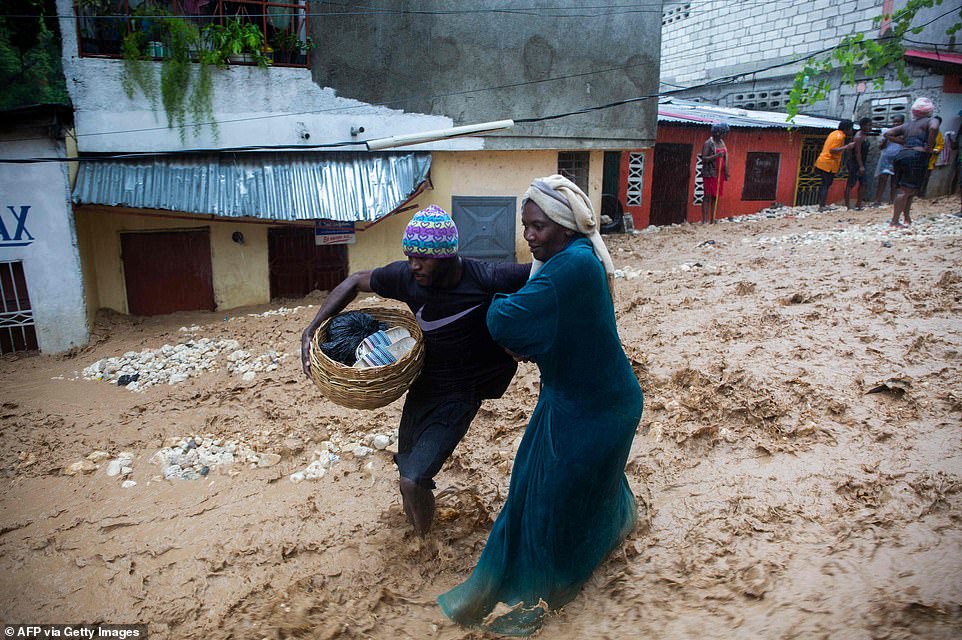 People selling from the market walk in the flooded street in Haiti Sunday. The storm gained power as it passed over the country and it expected to be a hurricane by the time it makes land in the United States 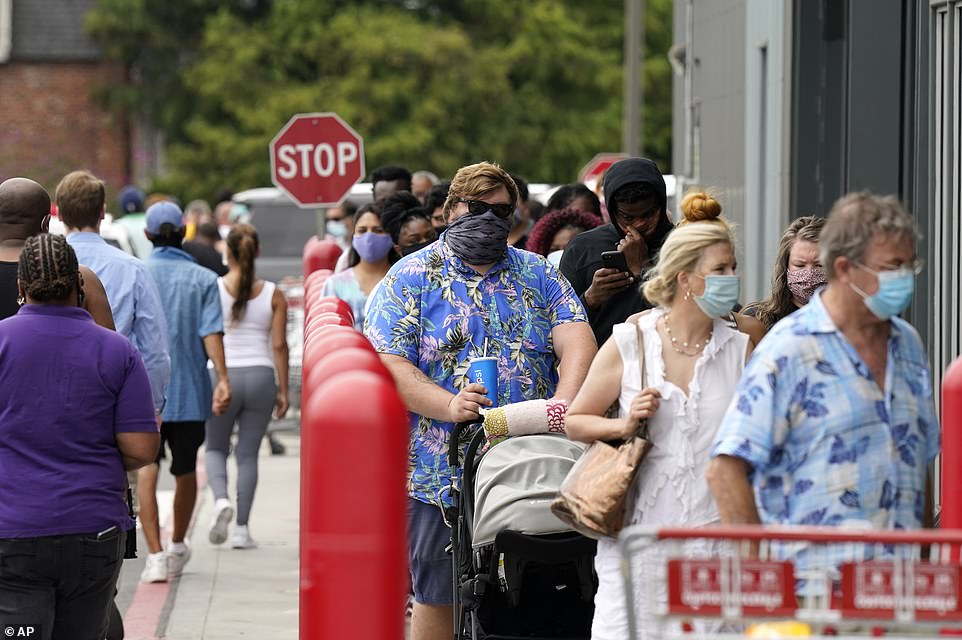 ‘There has never been anything we’ve seen like this before, where you can have possibly two hurricanes hitting within miles of each over a 48-hour period,’ said Benjamin Schott, meteorologist in charge of the National Weather Service’s Slidell, Louisiana, office.

It appeared the storms would avoid being hurricanes simultaneously – something that researchers say has never happened in the Gulf of Mexico at least since records began being kept in 1900.

The National Hurricane Center said Marco was about 240 miles south-southeast of the mouth of the Mississippi River on Sunday afternoon and heading north-northwest at 13 mph, packing winds of 75 miles per hour.

The center warned of life-threatening storm surges and hurricane-force winds along the Gulf Coast.

He warned the state’s residents that tropical storm-force winds would arrive by Monday morning and they should be ready to ride out both Marco and Laura.

‘Wherever you are at dark tonight is where you need to be prepared to ride out these storms,’ Edwards said. 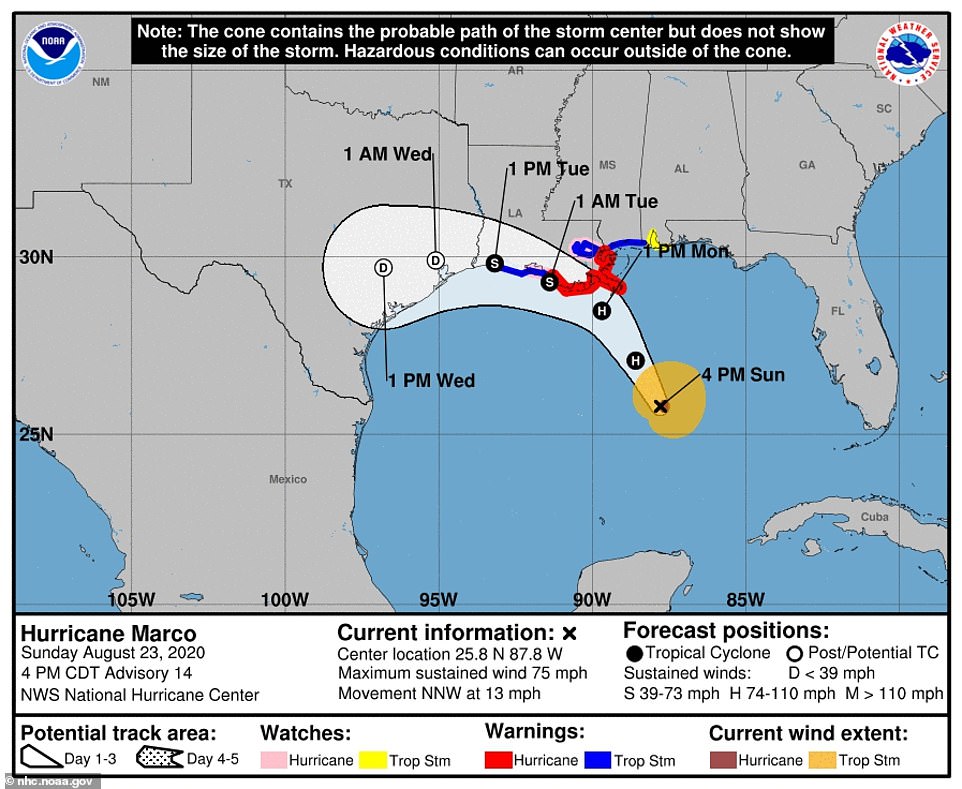 Hurricane Marco is expected to hit Louisiana by Monday morning 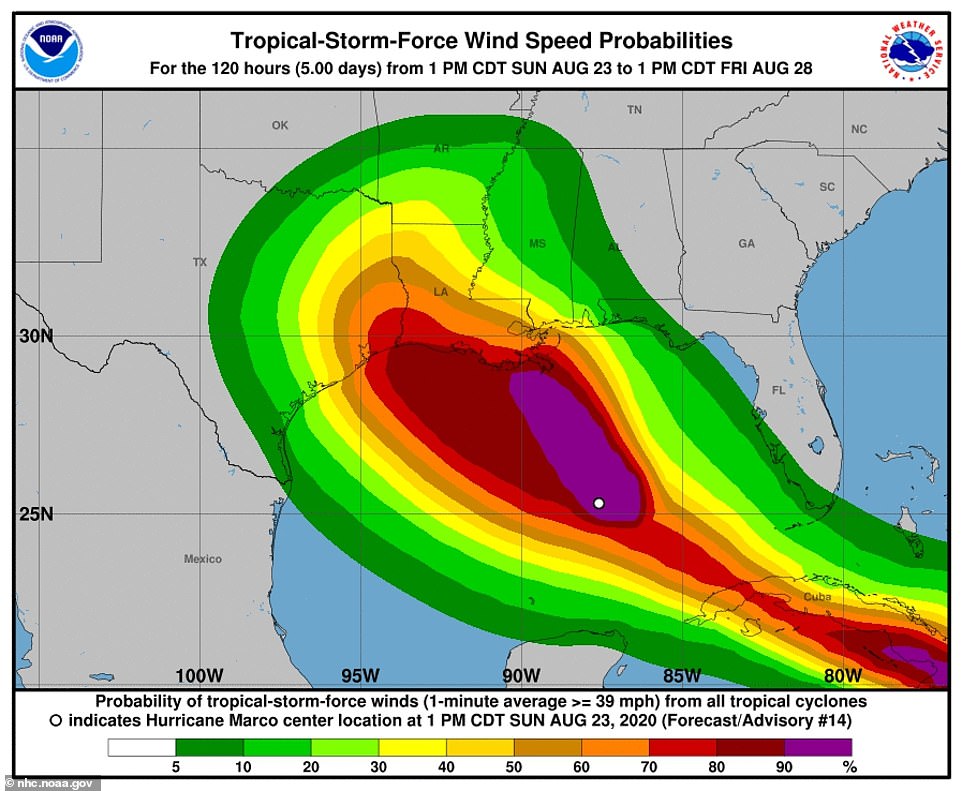 The National Hurricane Center said Marco was about 240 miles south-southeast of the mouth of the Mississippi River on Sunday afternoon and heading north-northwest at 13 mph, packing winds of 75 miles per hour 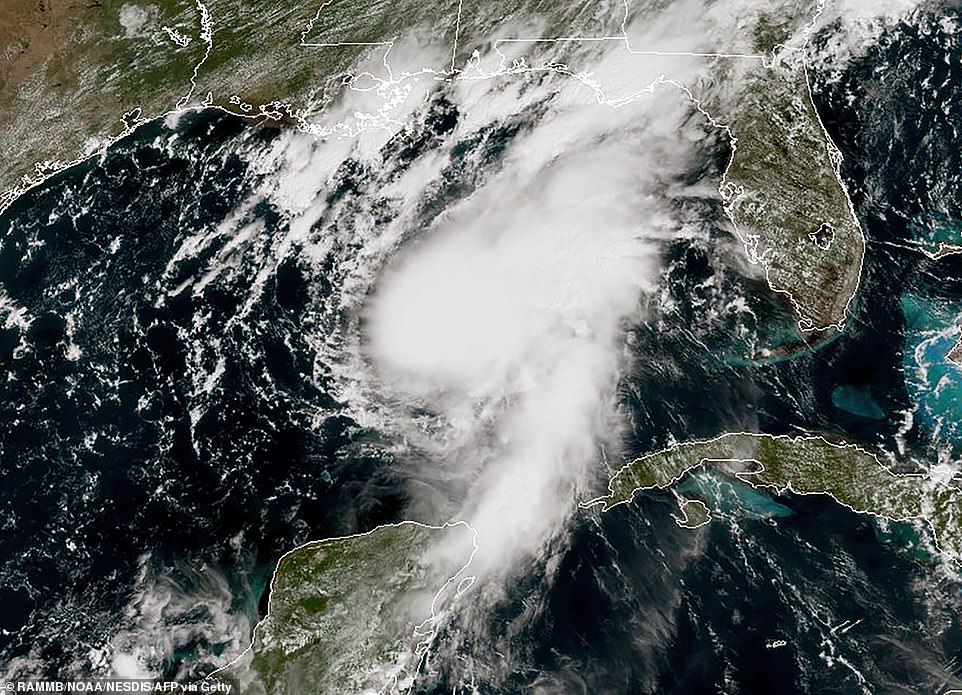 Hurricane Marco approaching into the US Gulf Coast on Sunday

People in Louisiana headed to stores to stock up on food, water and other supplies.

Laura was headed over Cuba before its path likely takes it to the same part of the U.S. coast as of Sunday evening.

A hurricane watch was issued for the New Orleans metro area, which Hurricane Katrina pummeled in August 2005.

Laura was centered about 50 miles off the eastern tip of Cuba as of Saturday afternoon, and its maximum sustained winds had strengthened to 60 mph. It was moving west-northwest at 21 mph .

It was forecast to move over Cuba on Sunday night or Monday.

Officials in the Florida Keys, which Laura might pass over on its route into the Gulf, declared a local state of emergency and issued a mandatory evacuation order for anyone living on boats, in mobile homes and in campers.

Tourists staying in hotels were warned to be aware of hazardous weather conditions and consider changing their plans starting Sunday. 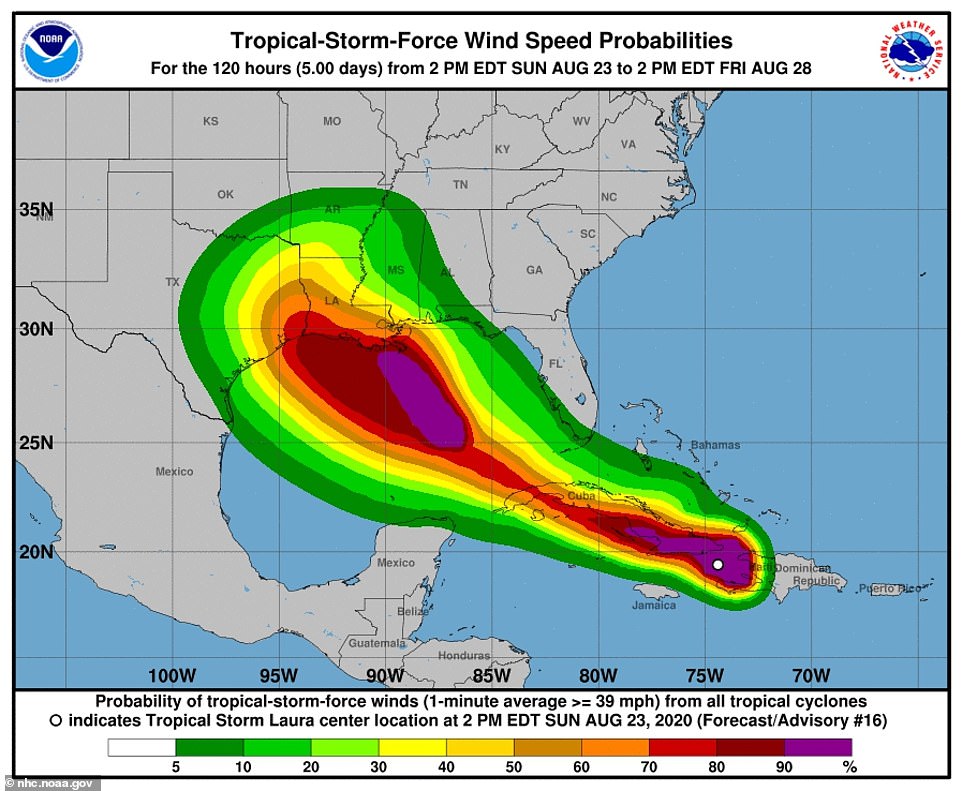 Storm Laura is expected to increase in power as it moves closer towards to US, strengthening into a hurricane 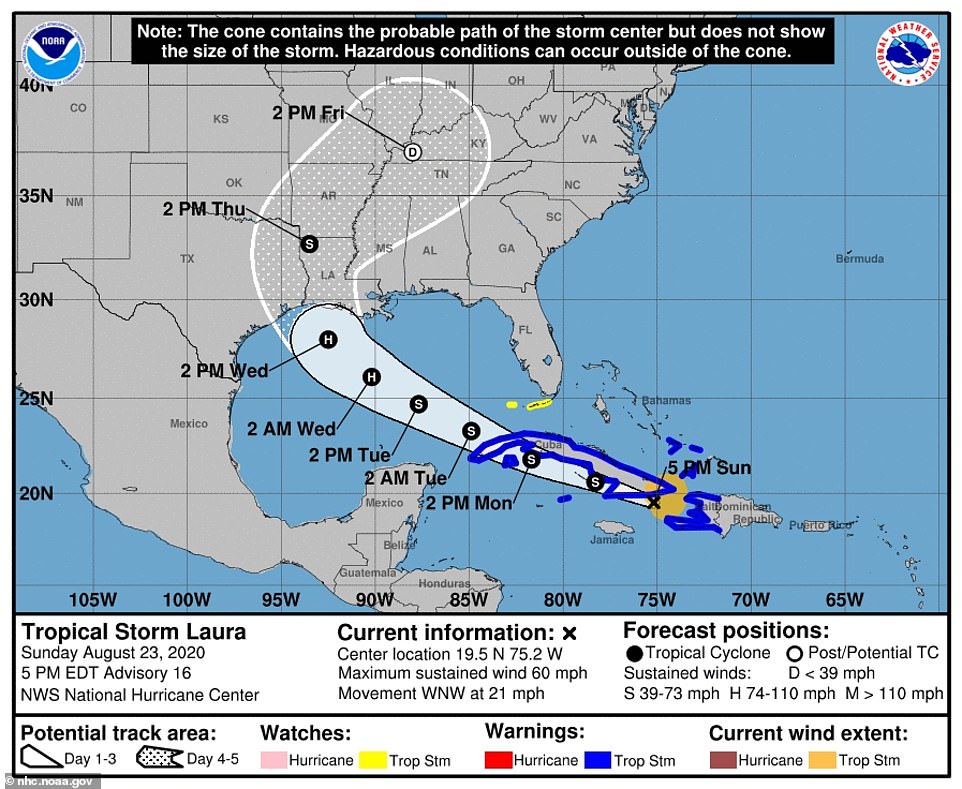 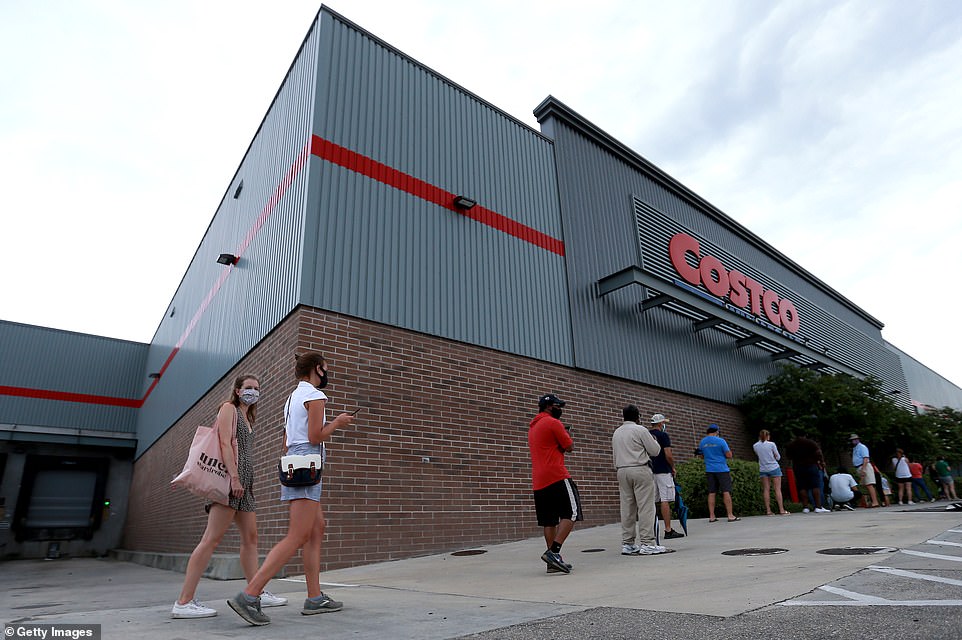 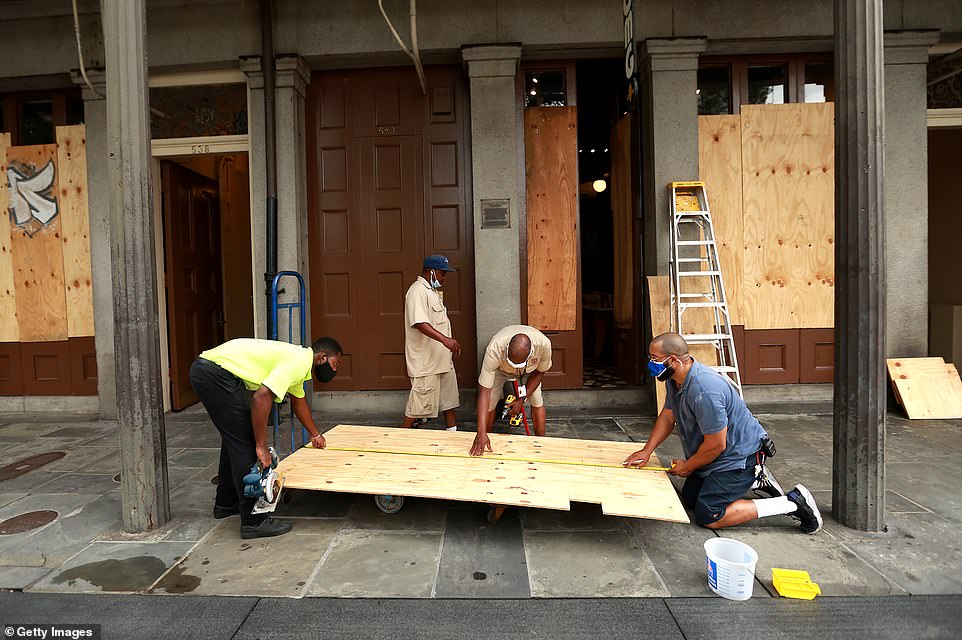 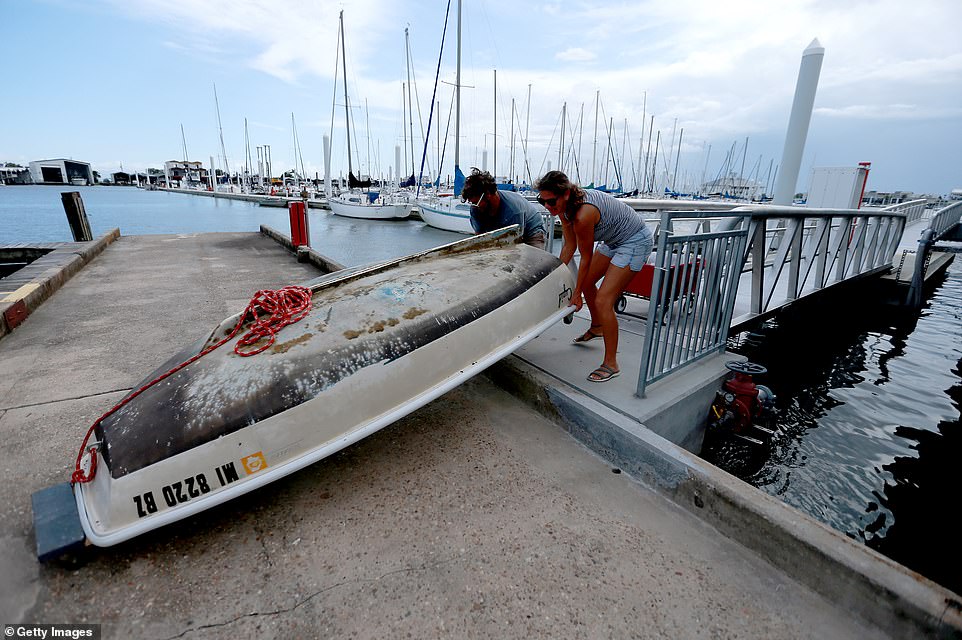 A storm surge of up to 6 feet was forecast for parts of coastal Louisiana and Mississippi.

The prospect of piggybacked hurricanes was reviving all-too-fresh memories of damage caused by Hurricane Katrina, which struck the Gulf Coast on Aug. 29, 2005. The storm has been blamed for as many as 1,800 deaths and levee breaches in New Orleans led to catastrophic flooding.

‘What we know is there’s going to be storm surge from Marco, we know that that water is not going to recede hardly at all before Laura hits, and so we’ve not seen this before and that’s why people need to be paying particular attention,’ Louisiana Gov. John Bel Edwards warned at a Sunday briefing.

In Port-au-Prince, Haiti, videos on social media showed people wading waist-deep in muddy water in some of the worst flooding the capital has seen in years after Laura hit.

Haiti is especially vulnerable to intense rains due to shoddy infrastructure and deforestation which increases the likelihood of landslides. 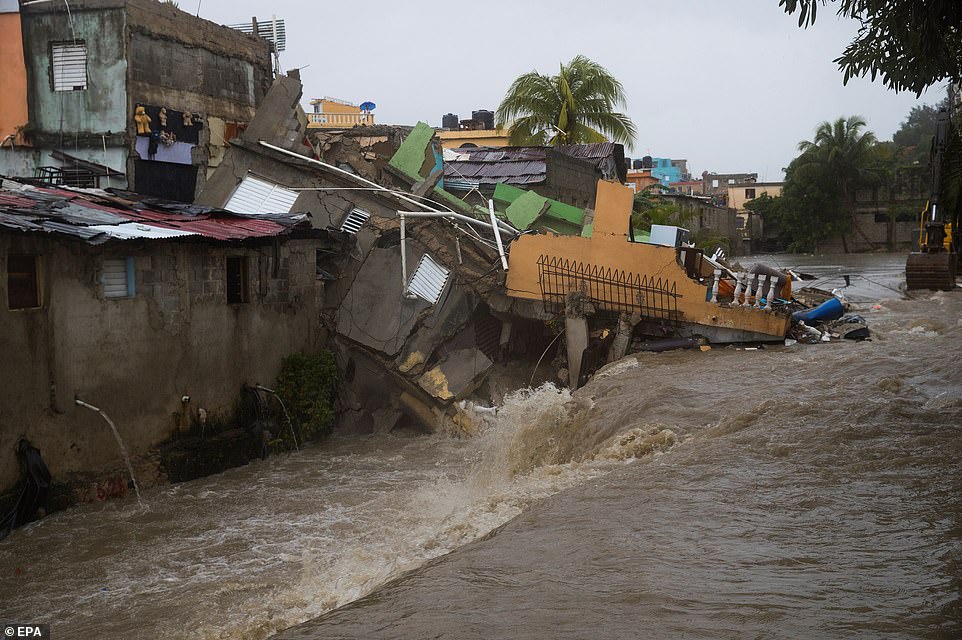 A view of collapsed houses, due to heavy rains from storm Laura in the Dominican Republic on Sunday 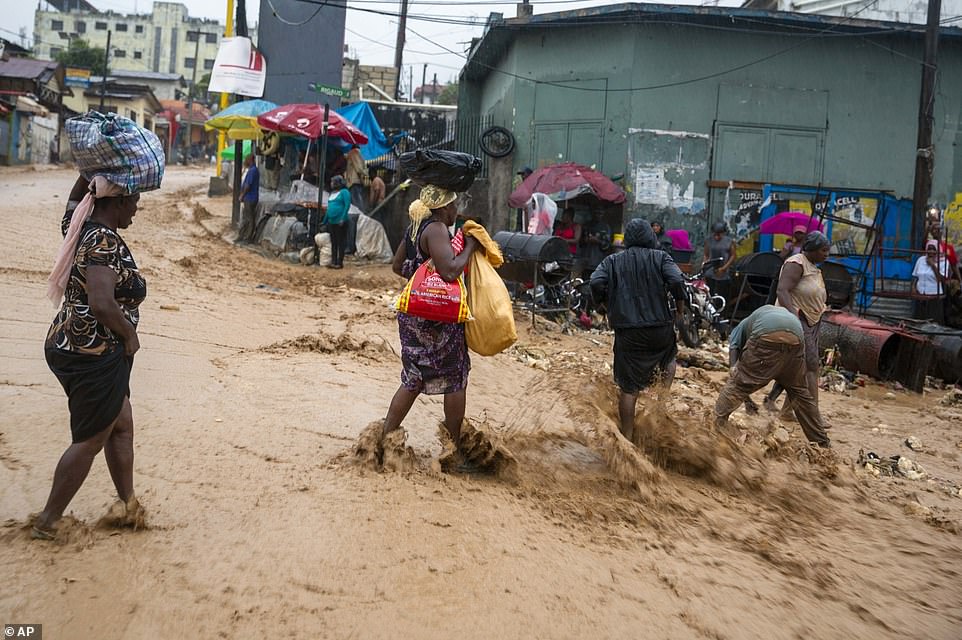 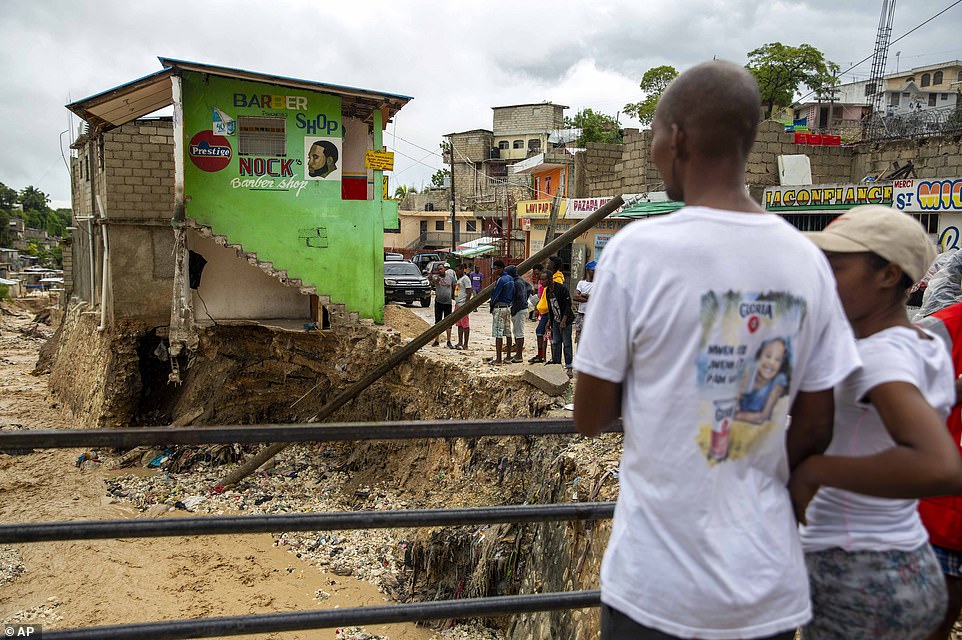 Authorities called on residents along the Artibonite River to evacuate due to risks the Peligre Hydroelectric Dam might burst its banks.

Haiti was the first to report a death from Laura, where a 10-year-old girl was killed when a tree fell on her home in the southern town of Anse-a-Pitres.

Haiti’s prime minister said at least four other people had died during the storm, and in the Dominican Republic relatives told reporters that a mother and her young son had died after a wall collapsed on them.

Hundreds of thousands were without power in the Dominican Republic as both countries on the island of Hispaniola suffered heavy flooding.

With hopes dashed that the mountains of Hispaniola would weaken the storm, Cuba scrambled on Sunday to prepare for Laura.

Evacuations were underway in eastern parts of the Caribbean’s largest island, where the storm was expected to strike Sunday evening, bringing flooding, before traveling along the entire island on Monday.

The agency is prepared to handle back-to-back storms, he said, pointing to 2004 when four hurricanes took aim at Florida in a six-week period.

Officials in Louisiana’s coastal Lafourche Parish ordered a mandatory evacuation for residents of low-lying areas at noon on Sunday. 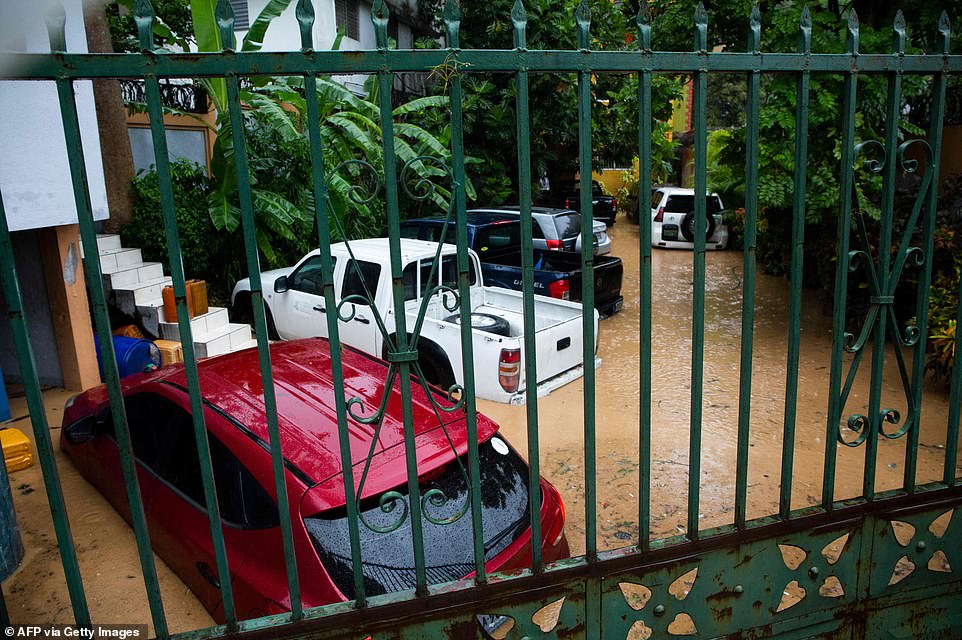 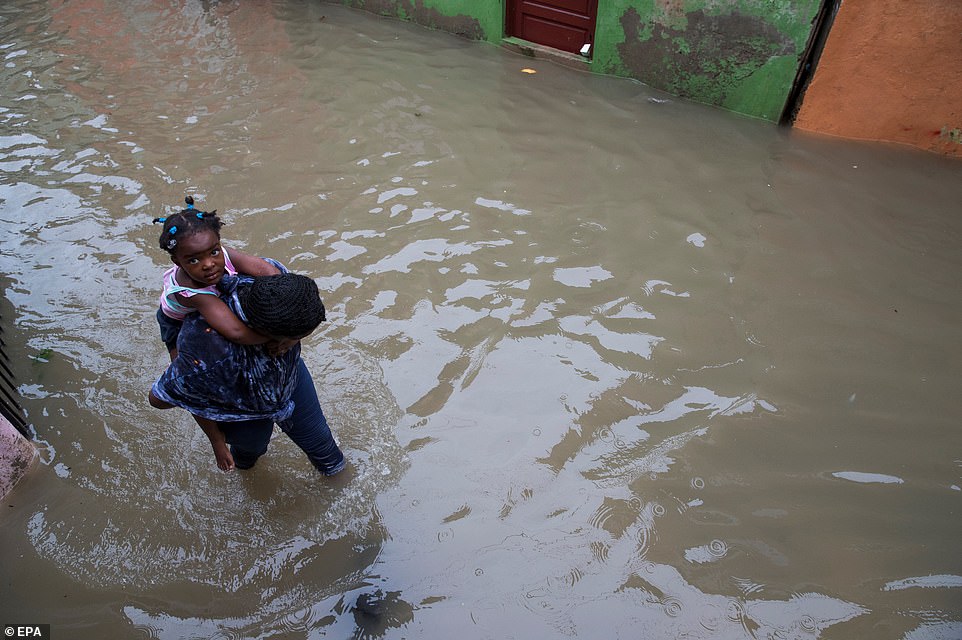 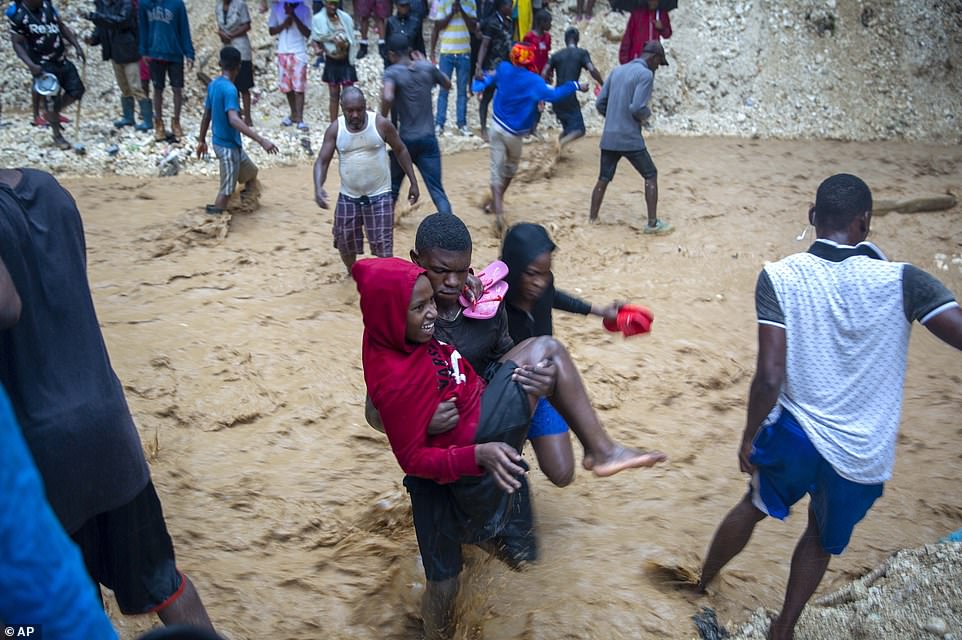 The U.S. Coast Guard also raised its warning for the Port of New Orleans, calling for ships to make plans to evacuate some areas.

The potential for flooding and evacuations added to worries about the spread of COVID-19.

Tulane University, the largest private employer in New Orleans, said it will close its testing center on Monday due to potential flooding and power outages and called on students to maintain social distancing guidelines.

In Grand Isle, at the state’s southern tip, authorities were placing sandbags to bolster its protective levy while energy companies continued to pull workers from offshore platforms and shut production in the U.S. Gulf of Mexico wells.

The city of Port Arthur, Texas, said on Sunday that it had run out of sand and sandbags for residents.

Equinor has finished evacuating its Titan oil-production platform in the U.S. Gulf of Mexico and shut-in oil production at the facility, a spokesman said on Sunday.

American democracy is losing the fight against Trump's misinformation. We need to turn it around.