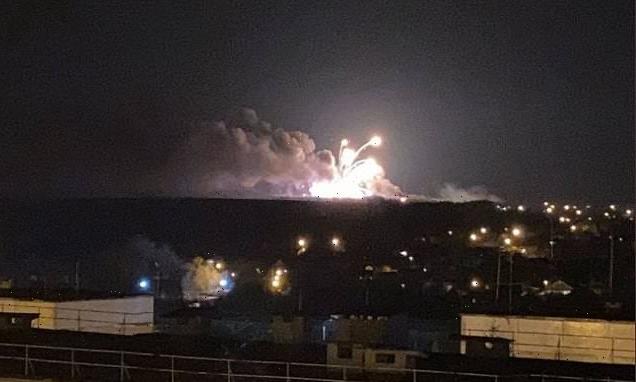 Is Kyiv taking the fight to Putin as his invasion stalls? Suspected arms depot in western Russia is destroyed ‘by Ukrainian missile’ sparking a blast seen from across the border

Footage has emerged of a huge explosion in Belgorod, western Russia, at the site of a suspected arms depot which is believed to have been hit by a Ukrainian missile.

The blast, which took place a mere 12 miles from the Russian-Ukrainian border near the village of Krasniy Oktyabr just outside the city of Belgorod, triggered a series of firework-like explosions which could be seen from Ukraine tonight.

Ukrainian journalist Yuriy Butusov claimed that the depot was destroyed by an OTR-21 Tochka-U ballistic missile fired by the Ukrainian 19th missile brigade, though this has not yet been confirmed by Ukrainian officials.

If the missile strike is confirmed by Ukraine’s armed forces, it will be just the second Ukrainian strike on Russian territory since the start of the war after the Millerovo airbase was attacked in late February. 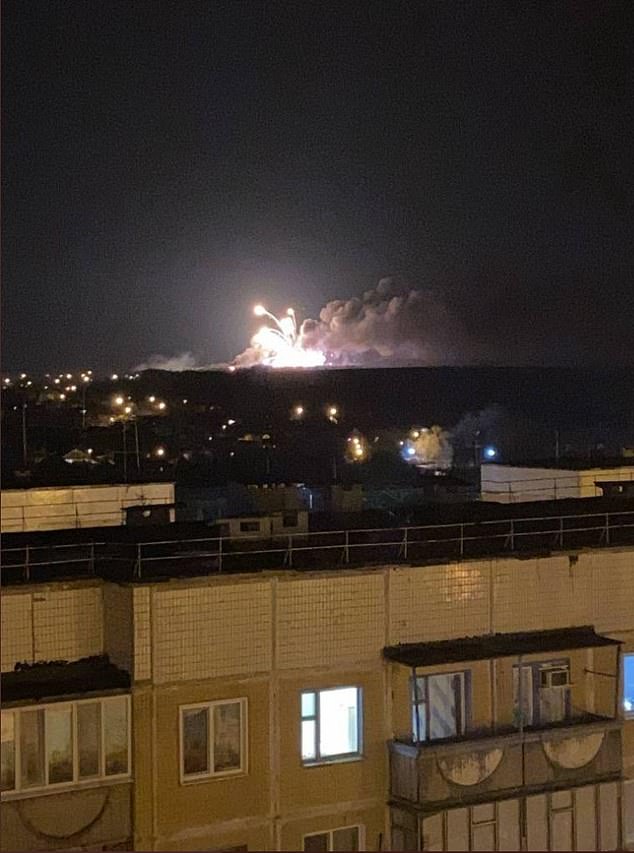 Footage has emerged of a huge explosion in Belgorod, western Russia, at the site of a suspected arms depot which is believed to have been hit by a Ukrainian missile. The blast, which took place a mere 12 miles from the Russian-Ukrainian border near the village of Krasniy Oktyabr just outside the city of Belgorod, triggered a series of firework-like explosions which could be seen from Ukraine

The Governor of Belgorod Vyacheslav Gladkov confirmed reports of the explosion and said that no Russian citizens were hurt, but refused to shed any light on the reason for the blast.

‘Explosions were heard on the territory of Belgorod and the Belgorod region,’ Gladkov said.

‘The incident took place near the village of Krasniy Oktyabr. The head of the village is in direct contact with me and has given me all the information. There are no casualties or injuries among the residents.’

‘I’ll post the reason for this later,’ he added.

However, Russian news agency TASS reported that four Russian military personnel were injured and said preliminary reports suggested the explosion was caused by a Ukrainian missile.

‘The shell hit the territory of a temporary military camp in the Belgorod region. Four servicemen were injured,’ an emergency services source told TASS.

The suspected Ukrainian shelling of the target in Belgorod comes the same day that Russia announced it would begin pulling back troops from Kyiv and Chernihiv following peace talks with Ukrainian delegates in Istanbul.

Ukraine’s delegation at the conference laid out a framework under which the country would declare itself neutral and its security would be guaranteed by an array of other nations.

Moscow’s public reaction was positive, and the negotiations are expected to resume on Wednesday, five weeks into what has devolved into a bloody war of attrition, with thousands dead and almost 4 million Ukrainians fleeing the country.

Amid the talks, Russian Deputy Defense Minister Alexander Fomin said Moscow has decided to ‘fundamentally… cut back military activity in the direction of Kyiv and Chernihiv’ to ”increase mutual trust and create conditions for further negotiations.” 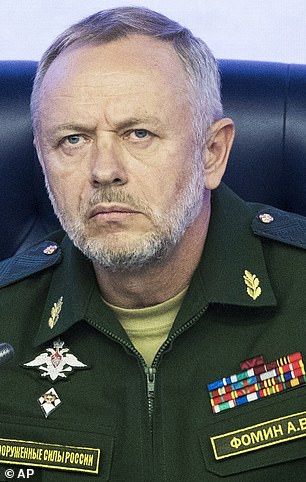 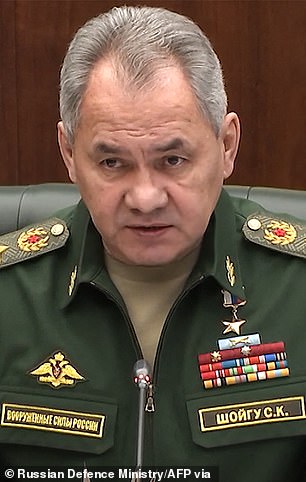 The Kremlin’s Deputy Defence Minister Alexander Fomin (L) said the change on the battlefield was meant to increase trust at peace talks, suggesting that the foundations of a ceasefire could be in play. His superior Sergey Shoigu (R) meanwhile said Russian forces will now concentrate on the ‘liberation’ of the eastern Donbass region rather than attacking major Ukrainian cities 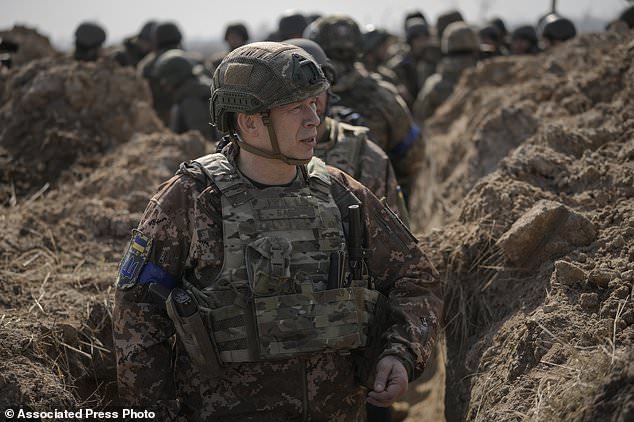 Col. Gen. Oleksandr Syrskyi, top military commander in charge of the defense of the Ukrainian capital, walks in a trench at a position north of the capital Kyiv, Ukraine, Tuesday, March 29, 2022. The first face-to-face talks in two weeks between Russia and Ukraine began Tuesday in Turkey, raising flickering hopes there could be progress toward ending a war that has ground into a bloody campaign of attrition

His superior Sergey Shoigu meanwhile said Russian forces will now concentrate on the ‘liberation’ of the eastern Donbass region rather than attacking major Ukrainian cities, which represents a major tactical shift in the face of bitter resistance.

But the announcement has been met with skepticism in Europe and the US, with British Prime Minister Boris Johnson today declaring Vladimir Putin could still seek to ‘twist the knife’ as the war enters a new phase.

And Western officials have remained highly suspicious of Russia’s true intentions, arguing that Russian attacks have continued despite the Kremlin’s promise to scale back troops in major urban centres.

One official speaking on condition of anonymity said: ‘Nothing that we have seen so far has demonstrated to us that President Putin and his colleagues are particularly serious about [scaling back]. It is more of a tactical exercise playing for time.

‘Even if they do do what they say they are going to do that is not in any shape or form a cessation of hostilities… I think we can continue to see continued death and destruction [in the Donbass].’