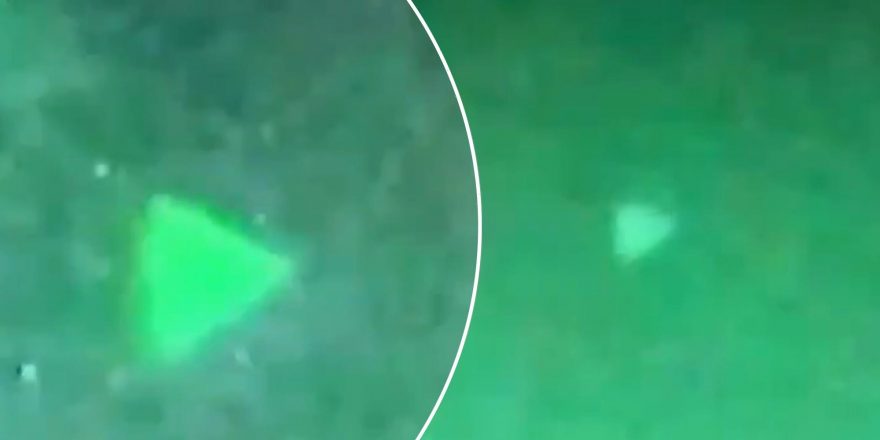 US intel details UFO that can break sound barrier without sonic boom, other ‘difficult to explain’ sightings

Baker Mayfield and wife ‘so confused’ after alleged UFO sighting

A renowned UFO investigator claims to have debunked the US Navy footage of pyramid-shaped objects flying off the coast of California — saying it “in every way matches a plane.”

Mick West, the author of “Escaping the Rabbit Hole,” said there are plausible explanations for the three flashing UFOs seen hovering over the USS Russell in July 2019.

He said the flashing lights seen coming from the object are similar to FAA-compliant lights on all normal airplanes.

“If you look at the video, you see it’s kind of flashing and it’s not flashing at a regular rate,” West said.

“It’s kind of like irregular, but it really reminds me of the flashing lights of a plane, and I looked into that and I found there are actually some planes that have a sequence of lights that like that there’s a long sequence overlaid a short sequence.”

The supposed UFOs were also moving at the same speed as planes in the area, West said.

“If you assume it’s a plane at 33,000 feet, you can calculate his angular velocity, from the information that’s available with the positions of stars,” West said.

“You can see it’s a bit less than 1 degree per second, which translates to about 400 to 450 knots, which is the exact same speed that the planes in that region were flying. At that time, that’s the speed that they fly over that area going towards Los Angeles. So, in every way, it matches a plane.”

As for the object’s peculiar pyramid-like shape, West said that can also be explained.

“It was immediately leapt out to me there was that there are other things in the video that are also triangular towards the end of the video,” he said.

“There’s two lights, which are triangle-shaped. So I thought, you know, you see this type of thing, when a video is out of focus, you often see the lights in the background take on the shape of the aperture of the camera, like the shape of the iris and the camera, and some cameras have a triangular iris. And so if that happens if you have a camera that’s a bit out of focus, it’s got a triangular iris, then you’re going to get these triangular shapes.”

The Pentagon had previously confirmed that the 18-second video was taken by Navy personnel.

“This is explosive information,” Corbell told Fox News. “This is probably the best UFO military-filmed footage certainly that I’ve ever seen, but I think also that the world has ever seen.”