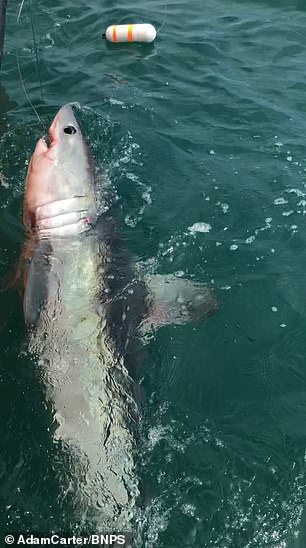 Adam Carter and Matt Mizen caught the two huge porbeagle sharks, one pictured, off the coast of Portland in Dorset

Two massive sharks weighing more than 500lbs have been caught off the south coast of England.

The pair of porbeagle sharks – a relative of the deadly Great White – were caught by anglers Adam Carter and Matt Mizen about seven miles off Portland, Dorset.

Last week trawlermen from Paignton claimed to have seen Great Whites off the coast of south Devon.

Mr Carter, 41, spent 1 hour and 45 minutes trying to reel in the shark and said he was left feeling exhausted after the struggle.

At one stage the powerful predator dragged Mr Carter’s boat, the Kelsey Jane, over 200 yards before it tired.

Even after reeling it in the shark was far too big to lift on board so Mr Carter brought it alongside to photograph and measure it before releasing it safe and well.

Along with blue sharks, porbeagles are the most common species of shark found in British waters.

Sightings and catches of them are thought to be on the increase due to a number of reasons. 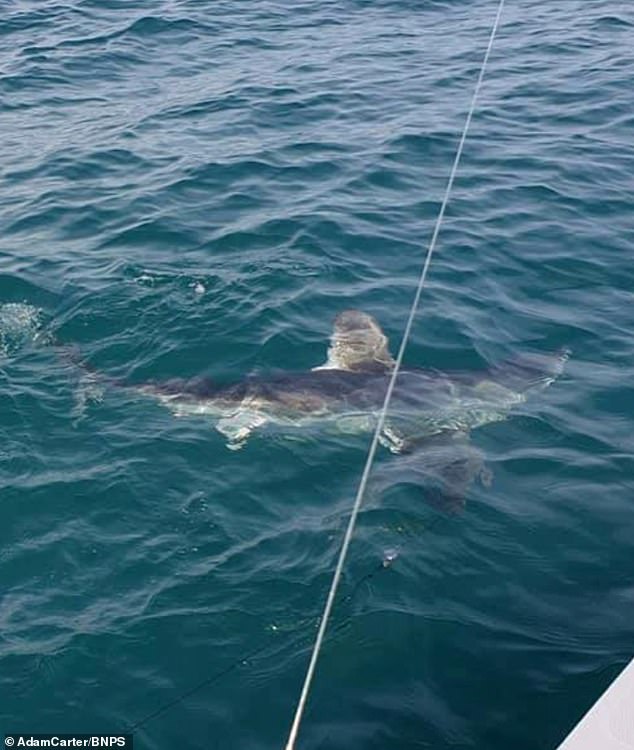 The shark Mr Carter caught, pictured, was estimated to have measured about 8-foot long and weighed 21-stone while Mr Mizen’s specimen was thought to weigh over 14-stone 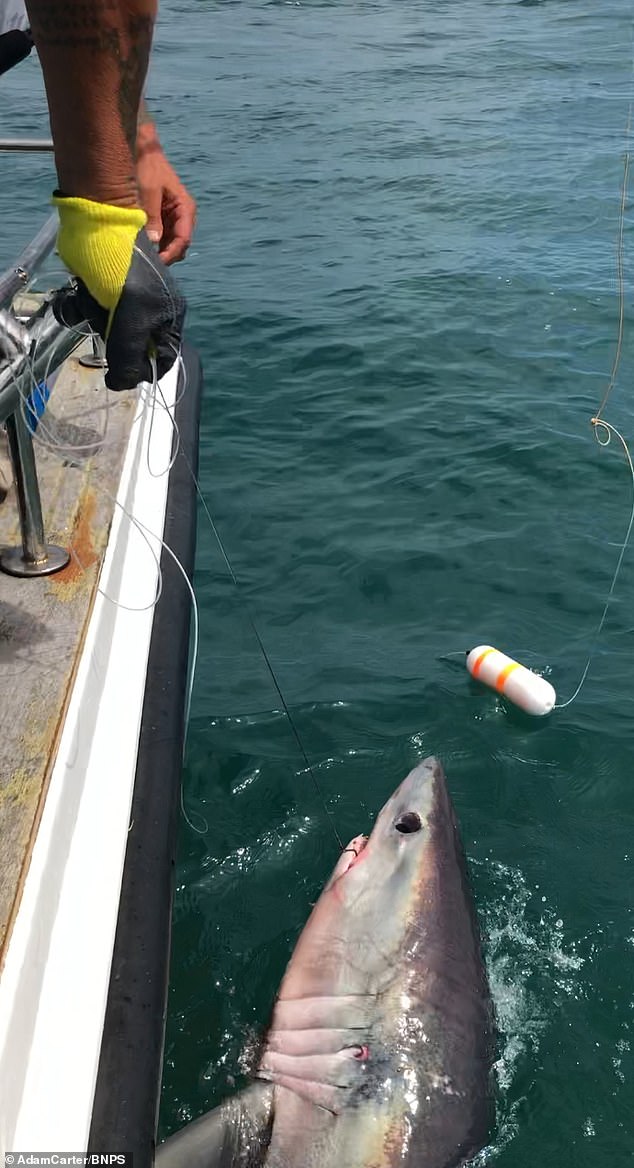 Mr Carter spent almost two hours trying to reel his catch, pictured, in but it was too heavy to bring aboad the boat so he took a picture of the shark against his boat the Kelsey Jane

Commercial fishing for them has been banned in European waters, resulting in a bit of a resurgence for the species.

And last year researchers from the University of Southampton said that more shark species could migrate north to UK waters as the oceans warm.

Mr Carter, who also runs a fishing charter business part-time, said he had never known British waters to be so full of sharks.

He said: ‘Shark fishing is the best I have known it in terms of the number and sheer size of them.

‘Now they are not being commercially fished for we are seeing more and more of them off Dorset.’

Mr Carter, from Weymouth, used mackerel as bait to catch his 300lbs specimen. 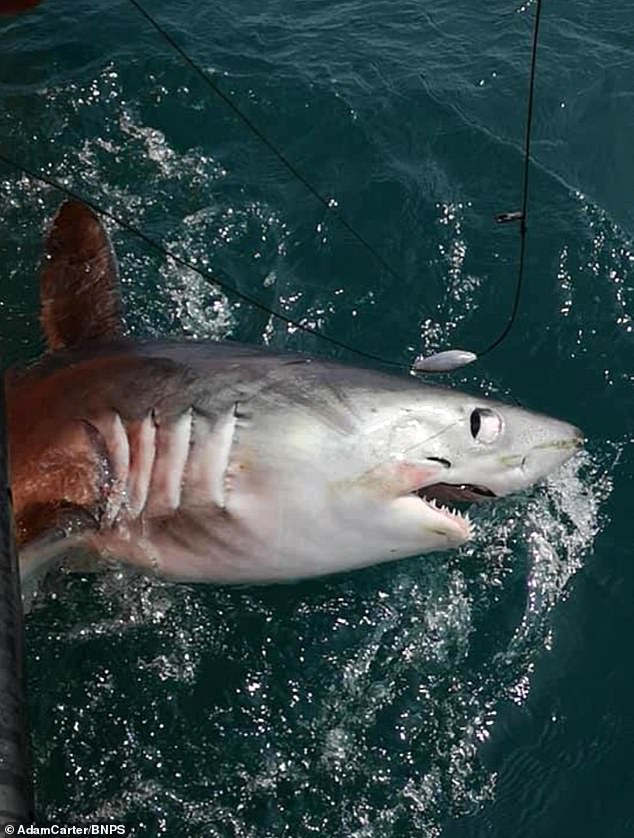 Porbeagle sharks, Mr Carter’s catch pictured, are one of the most common species of shark found in British waters 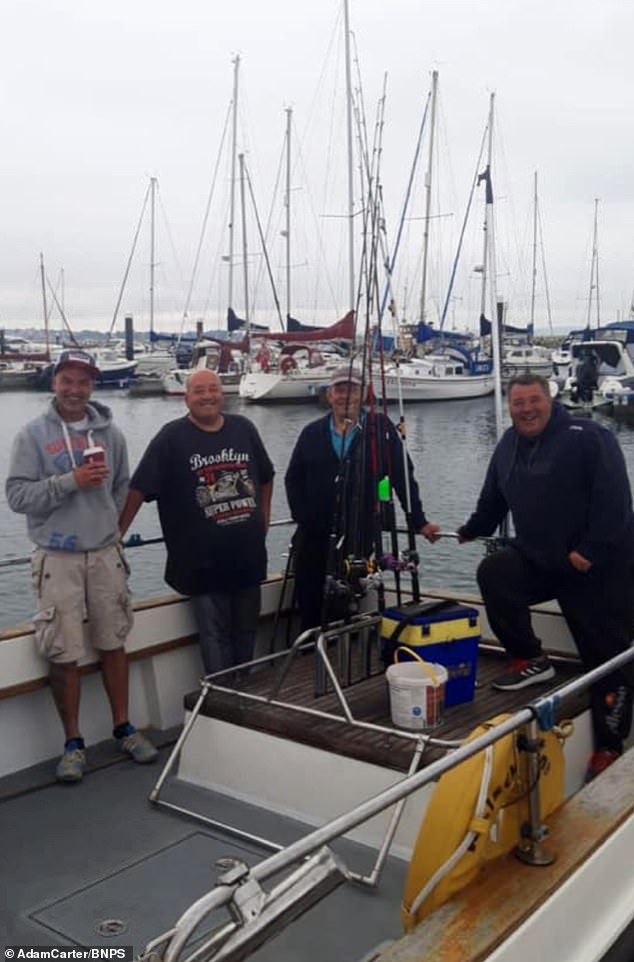 Mr Carter said he had never known British waters to be so full of sharks. Pictured left to right is Mr Carter, Damien Reynolds, Dave Hambridge and Chris Higgins

He said: ‘It took almost two hours to reel her in. She started off quite tame but I don’t think she realised what was going on.

‘Then after 10 minutes she started to play hard and we struggled to hold it. For for an hour and 45 minutes she was spinning the boat with runs over 200 metres.

‘Eventually we got her to the boat and released the hook. She was huge. We estimated up to eight foot long and about 300 pounds.

‘We don’t lift the sharks on board as we want to make it less stressful for them.’

Despite their association with the Great White, porbeagles are not considered to be a threat to humans with only three recorded non-fatal attacks before. 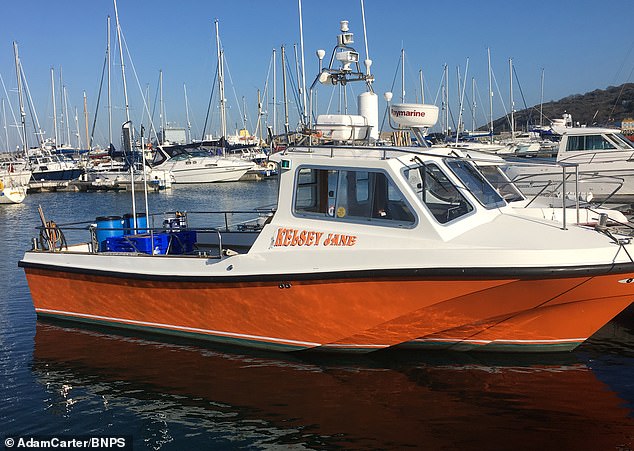 Mr Carter’s boat the Kelsey Jane, pictured, was pulled 200 yards while he tried to reel the huge shark in

The porbeagle shark – Lamna nasus in Latin – is classed by the International Union for Conservation of Nature (IUCN) as critically endangered in the north east Atlantic.

Last week trawlermen claimed to have seen Great Whites off the coast of Devon.

He said while shark numbers in general appear to be down – there have been sightings of the most infamous species.

Mr Lane said: ‘I think species like this swimming off the Devon coast would be a great thing and definitely good for my trade – people would love to see that sort of thing,’ the fishing trip operator said.

‘However, you are then bating wildlife which interferes with the ecosystem – they are not pets and shouldn’t be treated as such.’