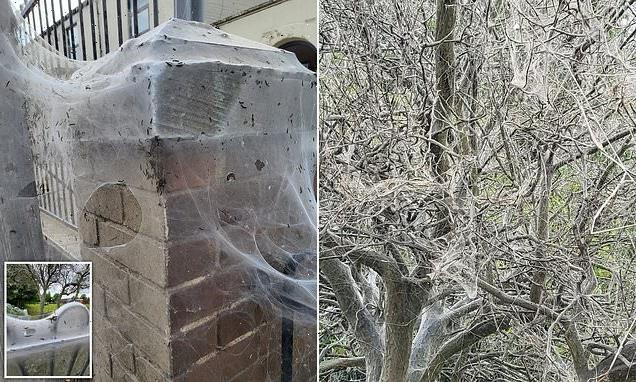 Trees and bushes covered in spooky giant web made by caterpillars

Is it Halloween already? Trees and bushes are covered in spooky giant web created by hordes of hungry caterpillars

A stunned mother was shocked to find giant cobwebs had covered the trees and bushes in her local park, making her think Halloween had come early this year.

Sarah Longfellow, 34, initially thought the leaves had ‘silly string’ or ‘fake snow’ on them before she realised they were really silken nests for thousands of insects.

Ms Longfellow has an intense fear of spiders so she was ‘creeped out’ by the cobwebs, which had completely covered an entire tree and bushes overnight.

Her phobia became ‘fascination’ at the rare display of nature as she discovered hordes of hungry caterpillars wriggling in the webs and park railings. 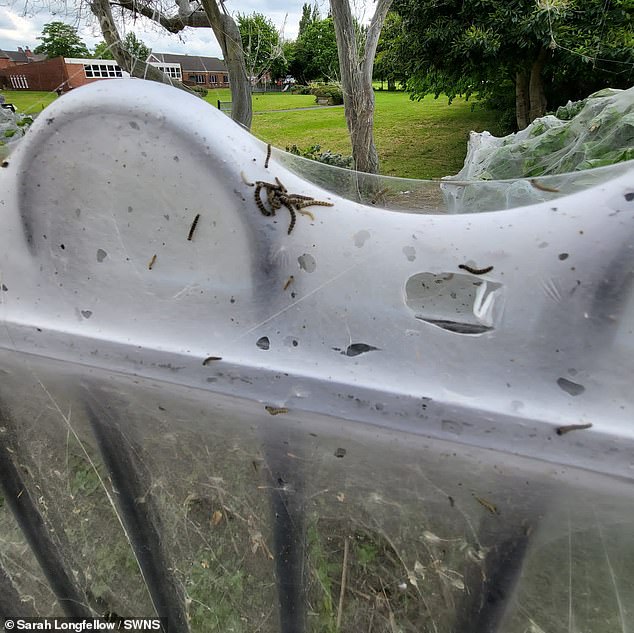 Arachnophobe Sarah Longfellow had a mass of insect nests greet her at her local park in the form of masses of insec nests covering fences, trees, bushes and benches 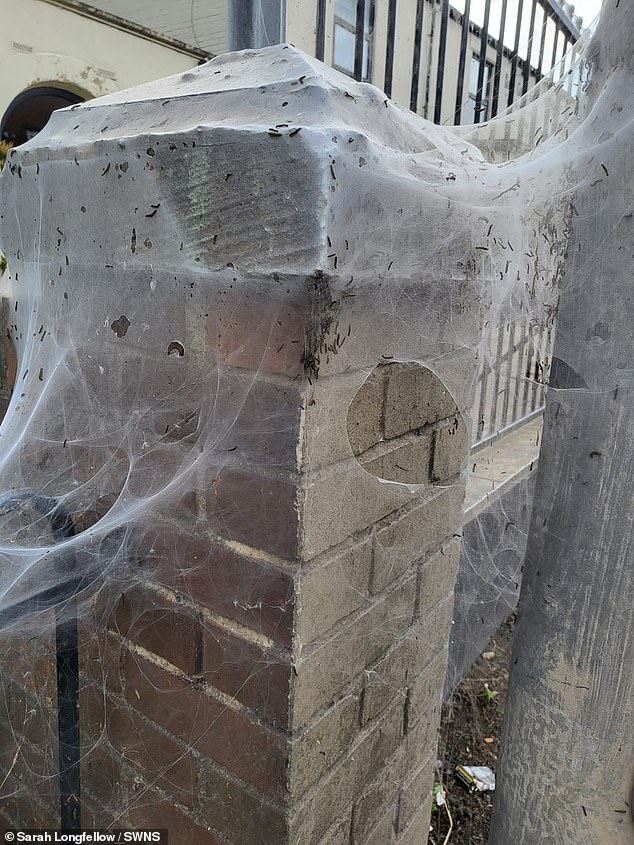 One insect even ended up in her mouth when she got closer with her son Cain, 3.

She said: ‘When we went up to it, it just looked like Halloween had come early, but then I noticed the webs were real.

‘At first, I thought it was going to be spiders, which I’m terrified of, but my son loves.

‘However, as we got closer, it turned out to be caterpillars inside and underneath the webs, and it then became more fascinating to me.

She added: ‘I was panicking a bit when one accidentally went in my mouth, and I did worry I might have a reaction. I didn’t know what was going to happen.

‘But when I looked online, it said they were not poisonous and were harmless to humans.’ 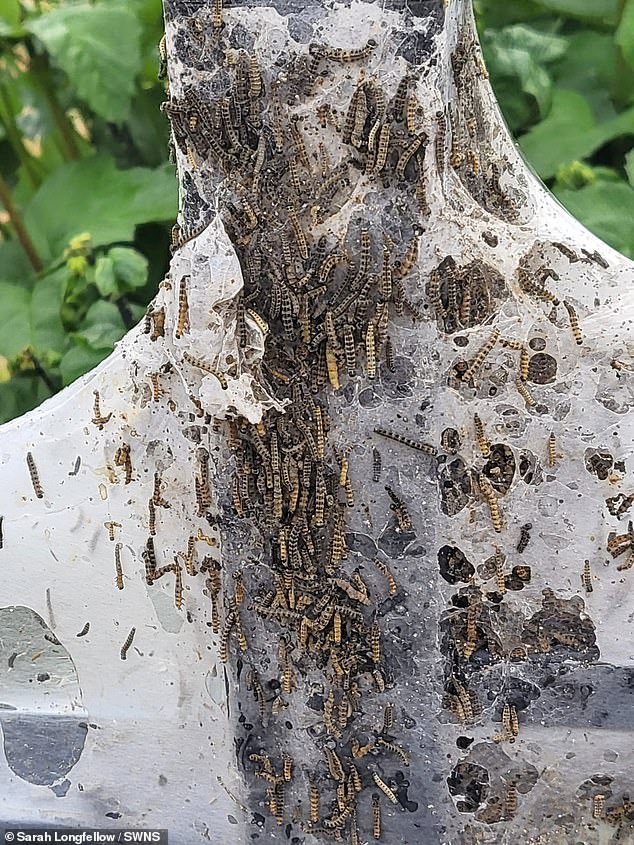 The caterpillars eventually create cocoons and emerge as ermine moths 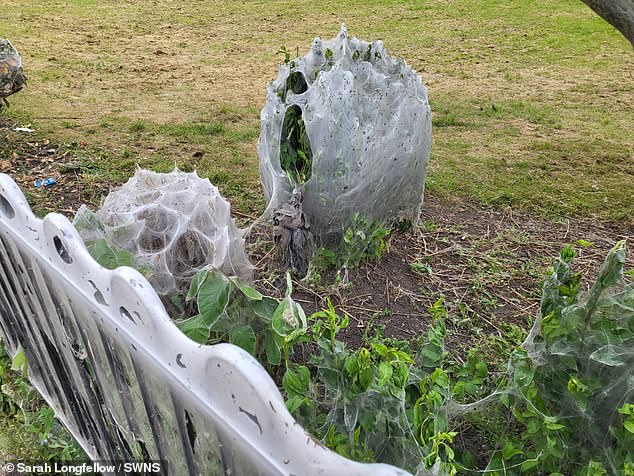 The masses of webs looked like silly string at first

Ms Longfellow, a council technical support office from West Yorkshire said she first spotted the mass of webs last week, while driving with her son.

She said: ‘The first time I saw them, I was driving past on May 22.

‘We were on our way to a party, and I thought somebody had sprayed silly string on some bushes – it looked just like snow.

‘But I was happy that they turned out to be caterpillars, and my son liked them too, as he loves The Hungry Caterpillar book.’ 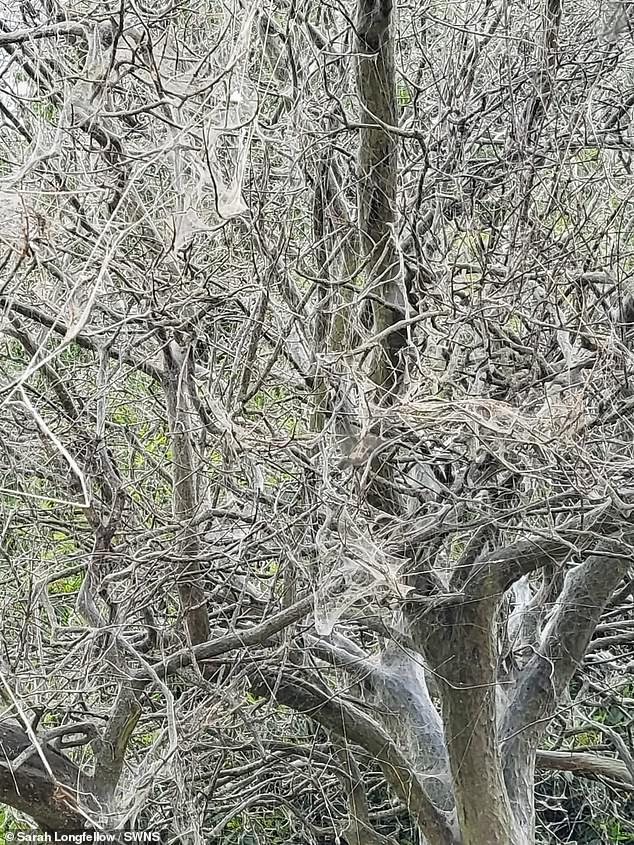 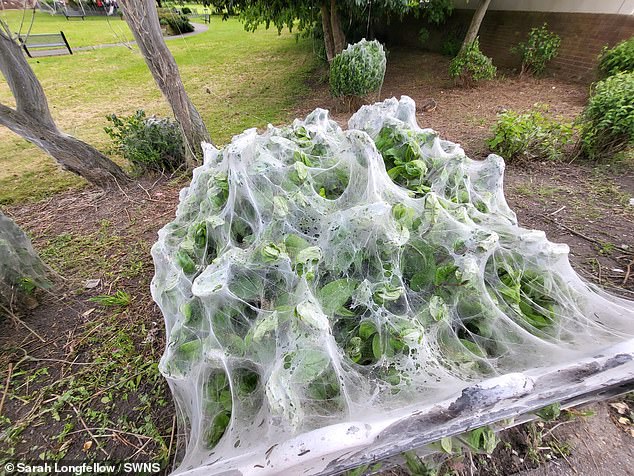 Ms Longfellow said the insects had completely taken over the trees, plants and railings of one side of Lock Lane community garden in Castleford, West Yorkshire.

She said: ‘The caterpillars were all underneath the webs – it was so extraordinary – and they had covered a number of bushes as well.

‘I have never seen anything like that. They were hanging down from the trees and blowing in the wind.

The mother said she looked online to find what species of caterpillars they were after one got into her mouth.

She said: ‘I googled them after one went in my mouth by accident, and it turns out they are called Ermine Moths. 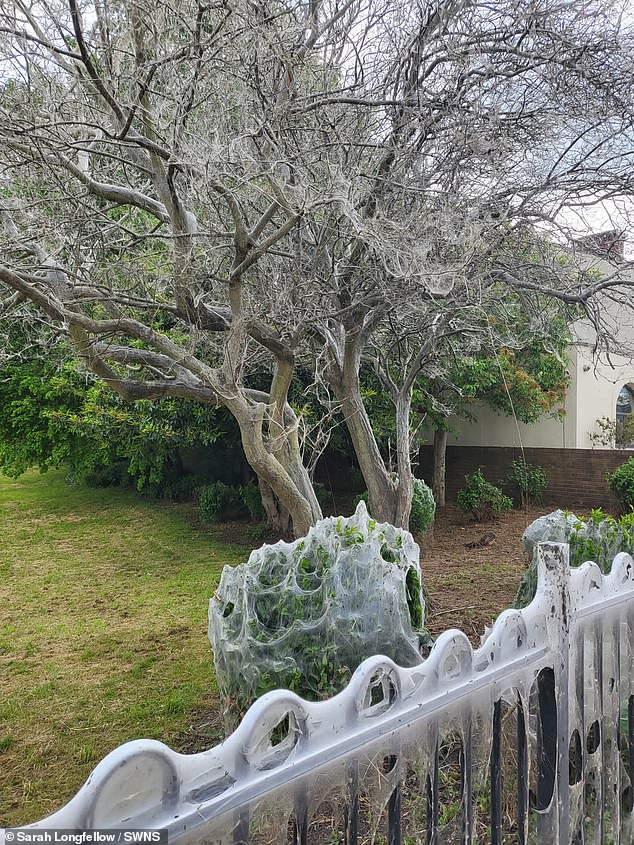 No surface was left untouched as webs weaves between trees, bushes, fences and benches 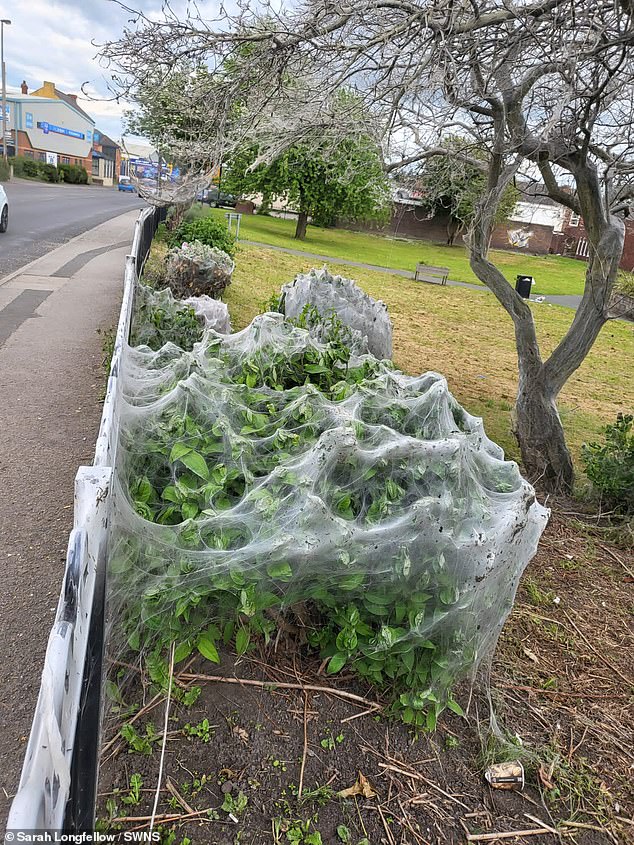 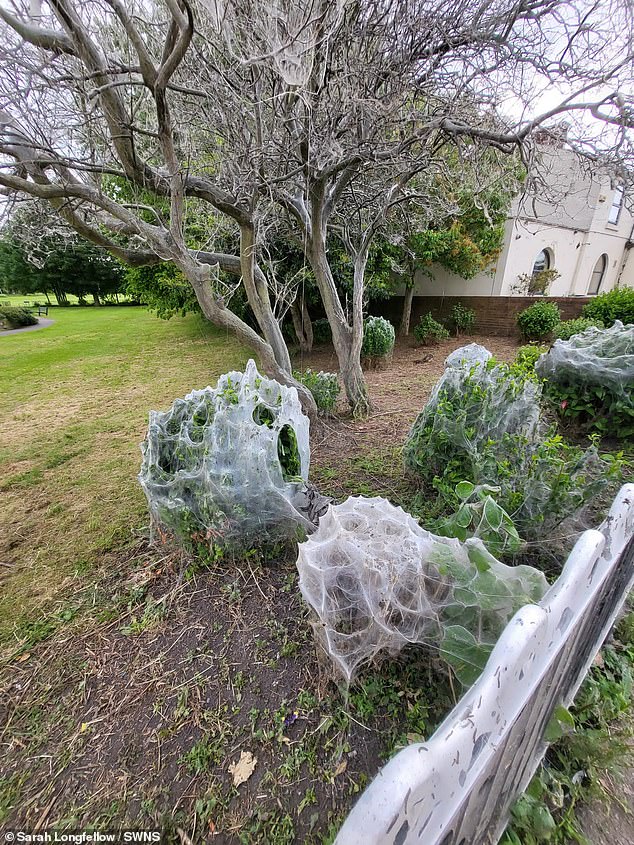 She added: ‘Apparently, they create these webs to protect themselves from birds. They strip all the leaves and have cocoons, and then later turn into moths.’

The webs hold thousands of caterpillars, which usually emerge in May or June.

The masses of silken webs slowly disappear over the summer allowing the bushes and trees recover.

The moths which eventually appear from them are white or greyish with black dots and look similar to ermine fur clothing, hence their species name.