Home » World News » This Japanese man shows up and ‘does nothing’. He’s made a living out of it

This Japanese man shows up and ‘does nothing’. He’s made a living out of it

Tokyo: Before moving out of Tokyo for her new job, Akari Shirai wanted to eat at the favourite restaurant she used to visit with her then husband. There was one issue: She didn’t want to be flooded with thoughts about her divorce by going alone. But she didn’t feel like inviting a friend and explaining the situation, either.

So she rented Japan’s “do-nothing guy”.

Their near-silent lunch lasted about 45 minutes. Shirai ordered her favourite dish and intermittently asked questions. She shared memories of her marriage and showed him a photo from the wedding. He nodded and gave curt answers, sometimes a dry laugh. He never initiated conversation.

It was exactly what Shirai wanted.

“I felt like I was with someone but at the same time felt like I wasn’t, since he existed in a way where I didn’t have to be attentive of his needs or think about him,” said Shirai, 27. “I felt no awkwardness or pressure to speak. It may have been the first time I’ve eaten in complete silence.”

For years, there’s been a cottage industry in Japan and South Korea of renting strangers to impersonate friends, family members or other acquaintances, as a way to save face at social functions where plus-ones are expected.

But over the past four years, Shoji Morimoto, 38, has built a cult following by offering himself as a warm body who can simply be there, liberating his clients from the social expectations of the spoken and unspoken norms of Japanese society. Morimoto – nicknamed “Rental-san,” incorporating an honorific – has inspired a television series and three books and has drawn international attention through his viral social media posts. 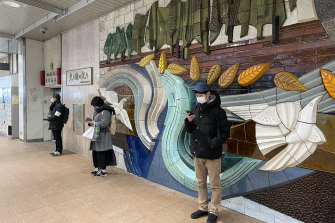 Morimoto’s gigs have run the gamut. He waited at the finish line of a marathon for a client who wanted to see a familiar face at the end of the race. Someone hired him to sit with them while they finished their thesis, because they might slack off working alone. He listens to health-care workers describe the mental health toll of the pandemic.

He charges 10,000 yen (about $115) per session, and is most frequently hired to accompany people who are at a turning point in life, who want to rewrite traumatic memories or experience a vulnerable moment they feel uncomfortable sharing with friends or family. He’ll just be there, with no judgment, and away from your personal space.

One woman hired him to accompany her as she filed her divorce papers. He once sat with a client for a hemorrhoid surgery consultation – with plenty of graphic photos. Someone hired him for a dramatic farewell as they boarded a bullet train to move from Tokyo to Osaka; he showed up and waved goodbye.

Morimoto often finds that his clients don’t want to burden people they care about with their needs.

“I think when people are feeling vulnerable or are in their intimate moments, they become more sensitive toward people that are close to them, like how they will be perceived, or the kind of actions they will take for them,” he said. “So I think they want to just reach out to a stranger without any strings attached.” 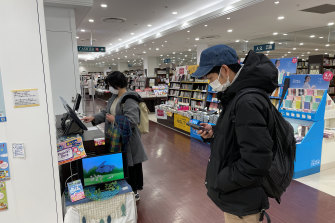 After lunch, Akari Shirai went to a bookstore to get a copy of Shoji Morimoto’s book and have him sign it. He tagged along as she bought the book and a pen. Credit:Washington Post/Michelle Ye Hee Lee

Unlike for others in the rental cottage industry, the expectations for Morimoto are minimal. Still, he provides emotional support that many people crave but may have trouble finding, especially during a pandemic that has exacerbated feelings of isolation, said Yasushi Fujii, a psychology professor at Meisei University in Tokyo.

“Interacting with friends and other people, there are always unknown factors that can come into play. But meeting with Rental-san, it’s very easy to know what to expect and to be in full control of the situation,” Fujii said.

A handful of other “rental” people have similar shticks, like a guy who gets hired to be treated to meals and a self-professed “ugly” guy who claims to boost others’ self-esteem. But Morimoto has cornered his niche market of doing nothing for cash, and many people now hire him for the novelty.

Morimoto, who grew up in Kansai, a southern region of Japan, stumbled into the role after being told in previous jobs that he wasn’t doing enough and didn’t have enough initiative to succeed. He has now fulfilled roughly 4000 inquiries and has one to two clients a day, down from three to four before the pandemic. Between his gigs and royalties, he says, he makes enough to do his part in maintaining a dual-income household and raising a son.

The lifestyle works well for Morimoto, who is not that talkative or expressive even when he’s not working. He wears his signature blue hat and a hoodie – and a blank stare – so that clients can easily recognise him, but dresses up when the situation requires him to be more formal.

Morimoto hesitates to make too many assumptions about why his business model has gained viral fame. He said he has learned not to judge others, and to have empathy for people who may be going through deep personal challenges but aren’t showing it.

“Even if people look normal and fine on the surface, they often have shocking pasts or secrets, or impossible problems,” he said. “People who come to me with crazy problems, they’re usually not people who look like they’re suffering. … Everyone, even the ones that seem well, all have their own sets of problems and secrets.”