The four states that will decide presidential election

The four states that will decide the presidential election: Biden pulls ahead in Georgia, is closing on Trump in Pennsylvania and leads in Nevada – but the President is gaining in Arizona

America’s next president hinges on the votes of four battleground states where the bulk of ballots have been counted but the race still remains too close to call.

This morning the eyes of the world were on the traditionally deep-red state of Georgia where Joe Biden leapfrogged Donald Trump to take the lead with just 917 votes.

The Democratic candidate had been eating away at the president’s margin with every dump of mail-in ballots, which are heavily skewing in his favor.

Biden is also closing the gap in Pennsylvania, which has 20 electoral college votes, and is ahead in Nevada, which has six,  and are must-wins to keep Trump’s reelection bid alive.

The Trump campaign has a ray of hope in Arizona, where it is the president who is benefitting from mail-in ballots and is catching up with Biden.

Fox News and AP called the state blue on election night but it has since tightened and is shaping up to be a photo finish.

Yet even with the state still in play, Biden only needs to clinch two of these battlegrounds to push him past 270 and take the White House.

Scroll below to drill down into the toss-up states where it is all to play for.

Your browser does not support iframes.

Joe Biden and Donald Trump are now neck and neck in Georgia, with the Democratic nominee ahead by only 917 votes early Friday morning.

Biden is ahead by an ultra-thin margin, after ballots trickled in from Clayton County, which is largely Democratic.

The latest figures puts both candidates in equal standing in terms of percentage points with each currently holding 49.4 per cent of the state vote.

There are now 11,000 votes that remain uncounted in the state across seven counties, in addition to the 8,900 overseas and military ballots that are due at 5pm.

At the moment there’s still no telling which way Georgia will swing as 4,800 votes are still up for grabs in Gwinnett County, the state’s second most populous county, where Hillary Clinton in 2016 became the first Democrat to win since 1976.

Trump’s standing in Georgia has swiftly weakened in the last 24 hours, having been up 9,000 votes on Thursday morning and 18,000 on Wednesday night.

President Trump and the Georgia Republican Party filed a lawsuit against election officials in Chatham County, asking a judge to order all late ballots be secured and accounted for.

It was filed after a Republican observer claims to have witnessed mail-in ballots which arrived after the 7pm deadline added to a pile of lawful votes to be counted.

Pennsylvania still has tens of thousands of votes left to count despite the secretary of state saying results could be returned on Thursday as Biden closes the gap and Trump loses a legal bid to stop ballot counting in Philadelphia.

Pennsylvania is among a handful of battleground states Trump and Biden are narrowly contesting as they seek the 270 electoral votes needed to win the presidency.

Trump, who held a 675,000-vote lead early Wednesday, prematurely declared victory in the state, which holds 20 electoral college votes. Trump leads the voting with 49.56 per cent of the vote, compared to Biden’s 49.29 per cent.

‘We’re winning Pennsylvania by a tremendous amount. We’re up 690,000 votes in Pennsylvania. These aren’t even close. It’s not like, ‘Oh, it’s close,’ Trump said during an appearance at the White House.

But by early Friday morning, had slipped to about 18,229 votes, according to CNN as mail in ballots from across the state continued to be counted, including some that were being counted by hand. The late counted ballots were overwhelming in Biden’s favor.

Biden is now leading in Nevada by more than 11,000 votes as President Donald Trump’s campaign filed a federal lawsuit in the state, alleging that ineligible votes were cast in the Las Vegas area.

About 75 per cent of the Nevada votes are in and Biden is leading by 11,438 votes, which is only about 1 per cent, as of Thursday night.

But there are outstanding about 50,000 ballots left to be counted in the coming days. Under state law, they can still be accepted so long as they were postmarked by the November 3.

Trump narrowly lost Nevada in 2016 as the state has trended toward the Democrats in the past decade. The last Republican presidential contender to win the state was George W. Bush in 2004.

Nevada has delayed giving its election result, saying they need until at least today to count the remaining votes, as the country and the world wait in agony to find out who the next president will be. 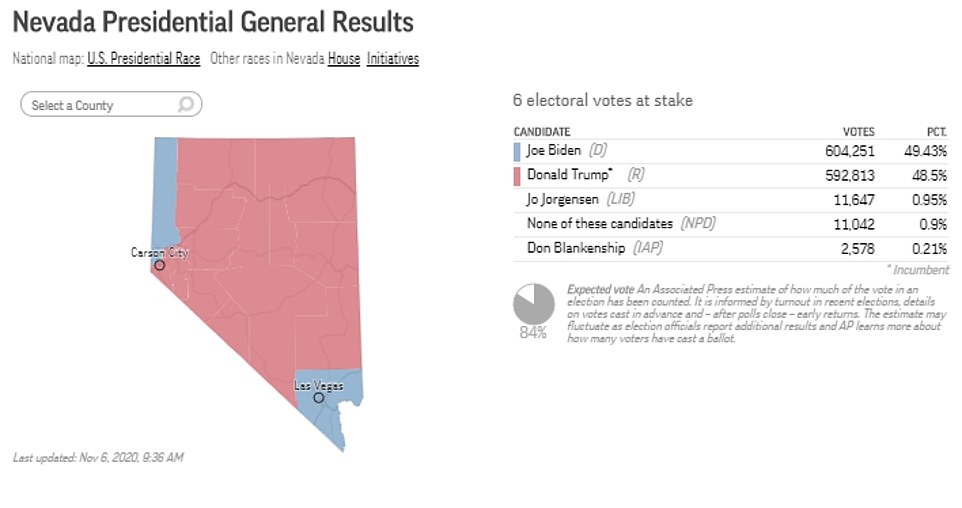 Biden’s lead in Arizona has dropped to less than 47,000 votes after Donald Trump narrowed the gap following a dump of mail-in ballots on Thursday night.

Biden remains ahead but only by 46,257, or 50.1 per cent, compared to Trump’s 48.5 per cent, after the president secured the majority vote in the state’s most populous county of Maricopa, which makes up 60 per cent of the total vote.

Arizona Secretary of State Katie Hobbs said there are 240,000 ballots that still need to be counted statewide, with 200,000 of those in Maricopa County, home to the state capital of Phoenix. Officials are expected to update the count by 11am Friday.

Arizona has a long political history of voting Republican. It’s the home state of Barry Goldwater, a five-term, conservative senator who was the Republican nominee for president in 1964.

John McCain, the party’s 2008 presidential nominee, represented the state in Congress from 1983 until his 2018 death.

But changing demographics, including a fast-growing Latino population and a boom of new residents – some fleeing the skyrocketing cost of living in neighboring California – have made the state friendlier to Democrats. 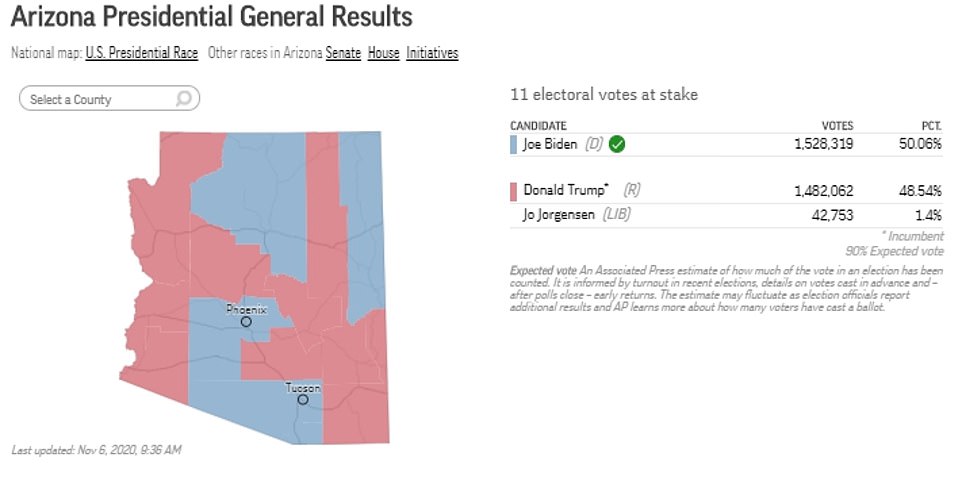 AP already called the result for Biden, but the race is tightening