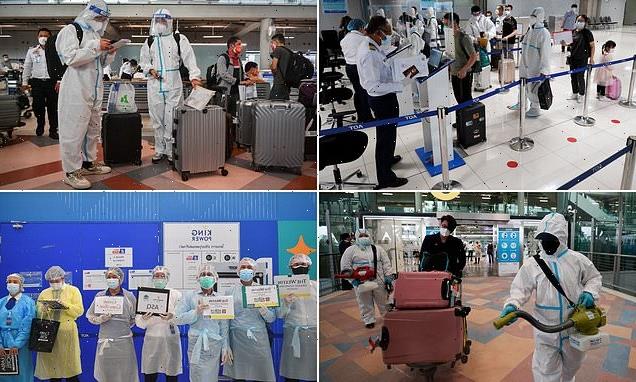 Thailand reopens to vaccinated tourists after 18 months of covid curbs

Thailand reopens to vaccinated tourists from 60 countries including the UK, China, USA and most of Europe after 18 months of strict covid curbs

Thailand has reopened its borders to vaccinated tourists from over 60 ‘low-risk’ countries including UK, China, the US and most of Europe after 18 months of strict Covid restrictions.

The coronavirus pandemic hammered the kingdom’s tourism-reliant economy, which last year saw its worst performance since the 1997 Asian financial crisis as arrivals dwindled more than 80 percent.

Thai authorities have given the green light to vaccinated tourists from over 60 ‘low-risk’ countries to skip hotel quarantine – providing the sector with a much-needed lifeline.

Bangkok’s Suvarnabhumi airport and the holiday island Phuket’s international terminal were the first on Monday morning to receive visitors, with mostly European tourists greeted by staff dressed in personal protective equipment to process their documents.

‘The paperwork was a big effort and a struggle, but it feels good again to travel and get back to normal life,’ said German tourist Marcel Florian Popp, 25, after he and his friends passed immigration in Bangkok. 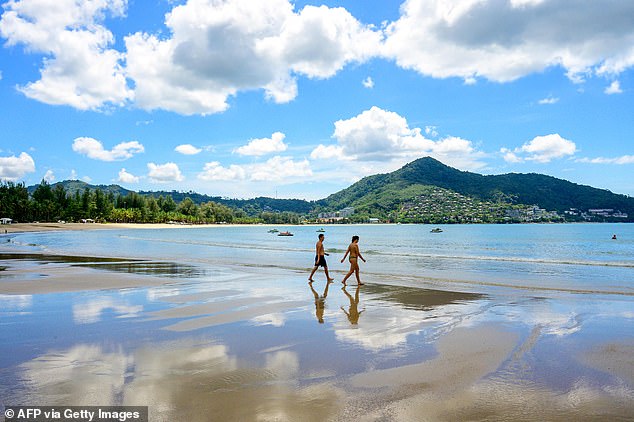 The coronavirus pandemic hammered Thailand’s tourism-reliant economy, which last year saw its worst performance since the 1997 Asian financial crisis as arrivals dwindled more than 80 percent. Pictured: Tourists walk on a beach in Phuket on Monday 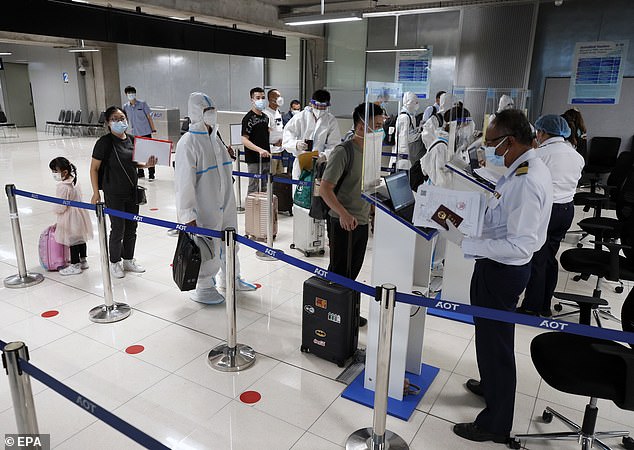 Thailand has reopened its borders to vaccinated tourists from over 60 ‘low-risk’ countries including UK, China, the US and most of Europe after 18 months of strict Covid restrictions 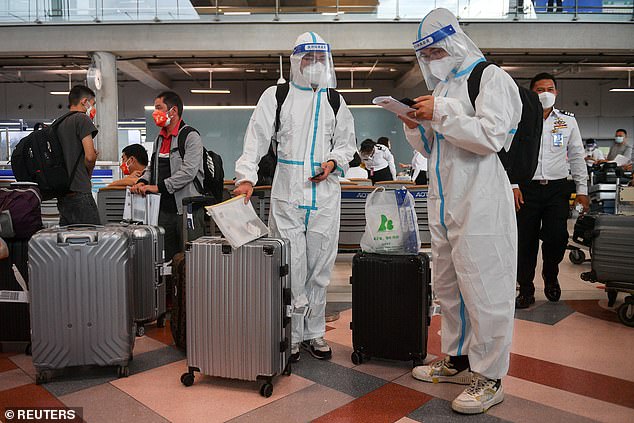 In Phuket, Lin Turley, 68, said he and his wife were regular visitors to Thailand before the pandemic and were looking forward to a relaxing month of golf and swimming in the island’s clear turquoise waters.

‘We have just come out of a cold Europe so we are looking forward to some warmth,’ he said.

‘We want to relax and enjoy being back in the Land of Smiles.’

Visitors are required to take a Covid test upon landing and spend a night at a government-approved hotel to await the results before being allowed to travel freely across the kingdom.

By late afternoon, about 1,500 foreigners had landed in Suvarnabhumi airport, said director Kittipong Kittikachorn, adding that he expects half of November’s estimated 135,400 visitors to be foreign.

Thailand hopes to capitalise on travellers escaping the winter blues in December, with several European countries, the United States and China on the approved list.

‘The most important thing that the government and I are thinking right now is to make people’s livelihoods return to normal,’ Premier Prayut Chan-O-Cha said Friday. 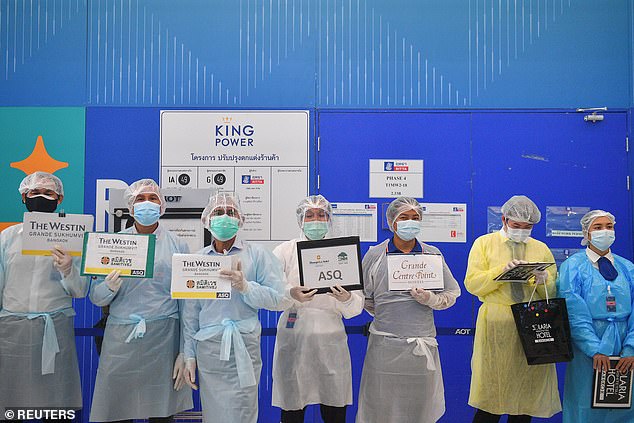 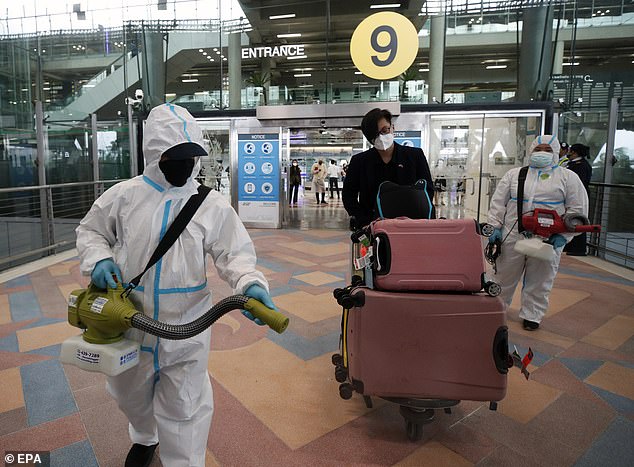 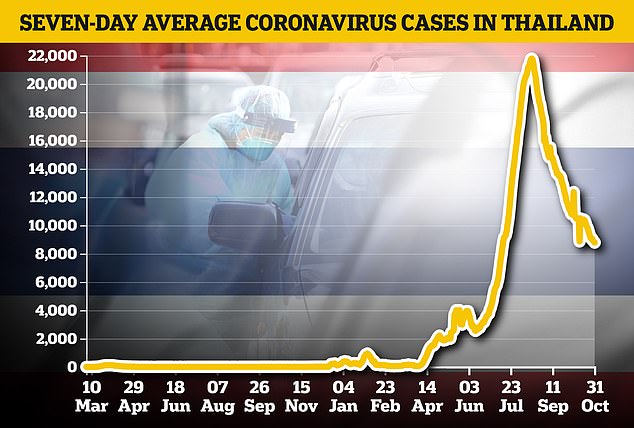 Thailand is still registering about 10,000 Covid infections a day while only about 40 percent of the population have received two vaccine doses 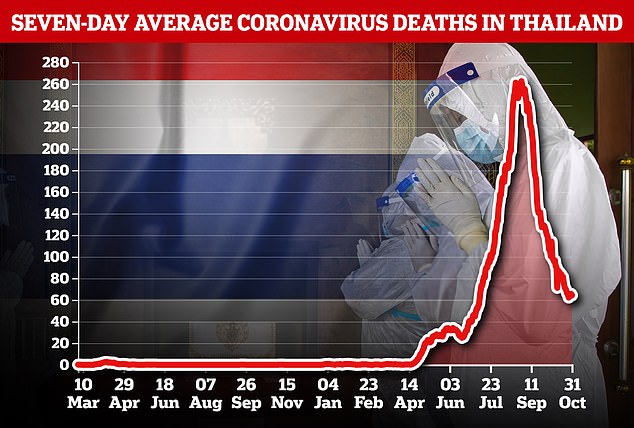 In Thailand, a country where tourism accounted for some 20% of the economy before the pandemic, the lockdown has caused massive job losses and hardship, and the government hopes the return of foreign visitors will provide a much-needed boost.

But authorities expect 10 to 15 million visitors to return next year, with revenues forecast to surpass £22 billion ($30 billion).

Industry insiders are less optimistic, however, especially with regional giant China – the source of the lion’s share of tourists – requiring returnees to undergo a strict quarantine programme.

Thailand is still registering about 10,000 Covid infections a day while only about 40 percent of the population have received two vaccine doses.

Thailand has allowed residents to travel during the pandemic, but mandated a strict two-week quarantine in specially designated hotels for people entering the country. 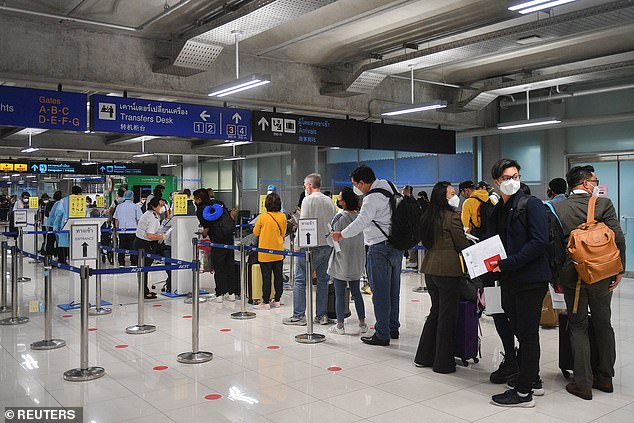 Foreign tourists arrive at Suvarnabhumi Airport during the first day of the country’s reopening campaign, part of the government’s plan to jump start the pandemic-hit tourism sector in Bangkok 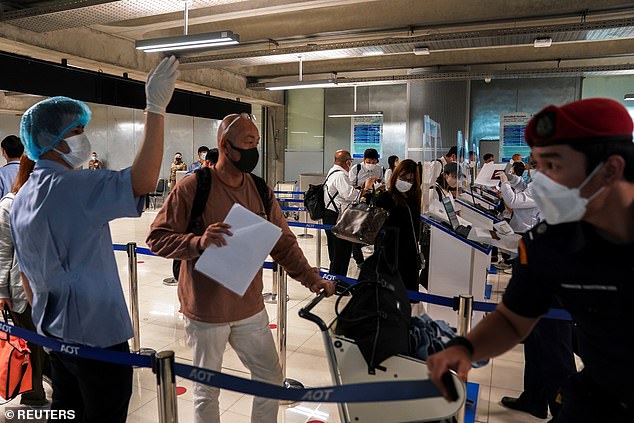 Only a few months removed from a surge fueled by the delta variant of the virus that saw deaths rise dramatically, many Thais remain worried that an influx of outsiders could trigger new outbreaks.

Bangkok taxi driver Issarapong Paingam lost his mother to COVID-19 during the recent surge, and said it would make more sense to him for the government to focus its attention fully on reopening domestically before introducing foreign travelers into the mix.

‘The government has not yet told the public what they would do if an outbreak takes place again,’ the 34-year-old said. ‘I don’t understand why they don’t let people in the country live normally as a trial to see the trend (of COVID-19 cases) before welcoming tourists.’

A pilot re-opening scheme dubbed the ‘sandbox’ kicked off in July, with Phuket allowing fully vaccinated visitors to roam the island paradise for two weeks rather than quarantine in a hotel before being allowed to travel to other areas of Thailand.

But it drew just 58,685 visitors in four months, a drop in the ocean compared to the numbers Thailand has come to expect.

Starting Monday, if travelers are fully vaccinated and from one of 63 countries and territories deemed ‘low risk’ – which some cynical Thais have noted seem to be based more on spending power than coronavirus infections – they are exempt from quarantine.

They need to spend one night at a designated hotel and can’t check out until they have a negative COVID-19 test, but then are free to travel.

Travelers from countries not on the preferred list or those who are unvaccinated are still subject to various quarantine rules. 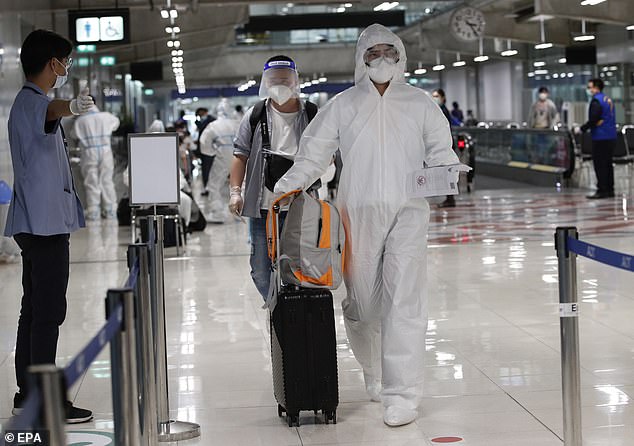 Restrictions are also being relaxed in the destination areas, including widespread reopening of businesses and other facilities such as department stores, spas, tattoo shops, schools and sporting events.

With the combination of strict screening of visitors and higher vaccination rates in Thailand, Supat Hasuwannakit, president of Thailand’s Rural Doctor Society, said he is not concerned about foreign tourists sparking a new surge in cases.

But he said he does worry about the planned reopening of bars and clubs in December, noting that recent domestic outbreaks came after the government allowed people to gather for activities such as religious services and weddings.

‘Once people start to gather, eat and drink, it has a high possibility to create a new outbreak,’ he said. ‘Most bars and nightclubs are indoors with bad airflow, so it is easy for COVID-19 to spread once they reopen.’

On Monday night, a stretch of bars near Patong Beach’s infamous Bangla Walking Street stood mostly deserted as waitresses tried to entice tourists to come in for a drink.

The vibe now is ‘very quiet’, said the Gannods from Melbourne, as the couple strolled along the near-empty Kamala Beach, describing it as a huge difference from their previous trips to Thailand.

‘It’s quite sad to see everything closed. We feel for (the small businesses) so we never bargain anymore,’ said wife Jordan Gannod.

But not everyone is itching for a return to business as usual.

Entrepreneurs on Koh Phi Phi – a popular island stop on the booze-fuelled backpacker trail – said it was ‘crazy’ pre-pandemic when businesses catered to ever-increasing numbers of tourists engaged in drunken debauchery.

‘Before it was the cheapest tourists in the world and all they wanted was sex, drugs and alcohol,’ said Roger Andreu, who works at a dive shop.

‘We need to make money but it cannot be the same.’