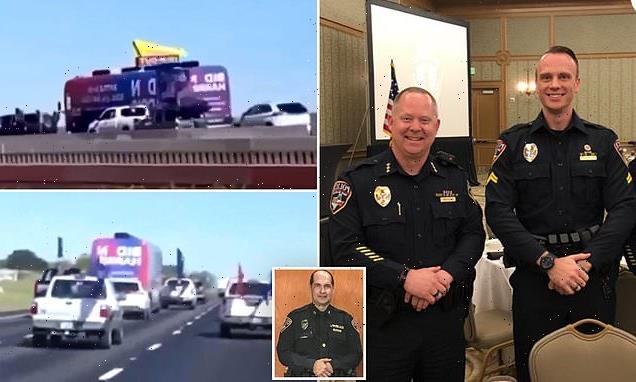 ‘We’re not going to escort a bus’: Texas police department is SUED by Dems for violating Ku Klux Klan act by failing to escort Biden-Harris campaign bus that was ‘threatened’ by Trump supporters’ cars ‘and laughing about incident instead’

Texas cops and a 911 dispatcher ignored desperate pleas for help from Democratic Party officials aboard a Joe Biden campaign bus that was surrounded by a convoy known as the ‘Trump Train’ while driving down a freeway last year, a lawsuit claims.

Officials with the San Marcos police ‘privately laughed’ and ‘joked about the victims and their distress’ as those aboard the Biden-Harris campaign bus feared for their safety, it is alleged.

The updated lawsuit, filed Friday, included transcribed 911 audio recordings, The Texas Tribune reported, although the audio of the offending calls has not been released.

According to the transcriptions, when the Biden bus entered San Marcos’ jurisdiction, a New Braunfels 911 dispatcher tried to get neighboring San Marcos police to take over the escort that New Braunfels had provided along Interstate 35.

‘I am so annoyed at New Braunfels for doing this to us,’ a dispatcher told San Marcos police Corporal Matthew Daenzer, who laughed, according to the transcribed recording in the filing.

‘They have their officers escorting this Biden bus, essentially, and the Trump Train is cutting in between vehicles and driving – being aggressive and slowing them down to like 20 or 30 miles per hour.

‘And they want you guys to respond to help.’

Daenzer told the San Marcos dispatcher ‘we’re not going to escort a bus,’ according to the documents.

‘We will “close patrol” that, but we’re not going to escort a bus,’ Daenzer is alleged to have continued.

The San Marcos dispatcher then tells Daenzer that those on board the Biden bus are panicked, saying: ‘[T]hey’re like really worked up over it and he’s like breathing hard and stuff, like, “they’re being really aggressive.”

Daenzer then allegedly tells the dispatcher that the Biden bus should ‘drive defensively and it’ll be great.’

‘Or leave the train,’ the 911 dispatcher responded, according to the lawsuit. ‘There’s an idea.’ 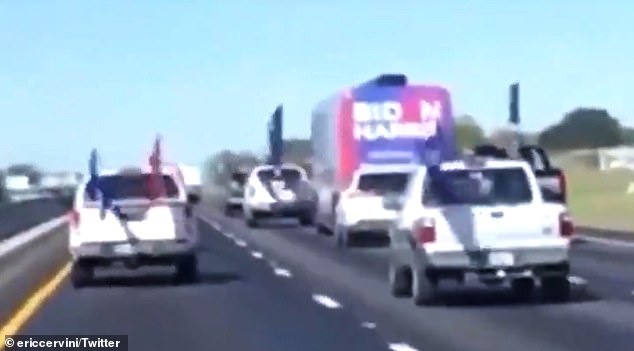 Texas police officials and a 911 dispatcher ignored desperate pleas for help from Democratic Party officials aboard a Joe Biden campaign bus that was surrounded by a convoy known as the ‘Trump Train’ while driving down a freeway last year, it’s been alleged

The dispatcher told one bus passenger to call back if the caller felt threatened.

‘Are you kidding me, ma’am?’ the caller replied.

‘They’ve cut in on me multiple times. They’ve threatened my life on multiple occasions with vehicular collision.’

The dispatcher then tells the caller on board the bus that authorities would monitor traffic violations if they arise but that there would be no police escort.

The lawsuit alleges that the high-ranking police official who made the decision not to send an escort is San Marcos assistant police chief Brandon Winkenwerder, who has been named in the lawsuit.

According to the documents, Chase Stapp, the public safety director, later texted to police that ‘from what I can gather, the Biden bus never even exited I-35 thanks to the Trump escort.’ 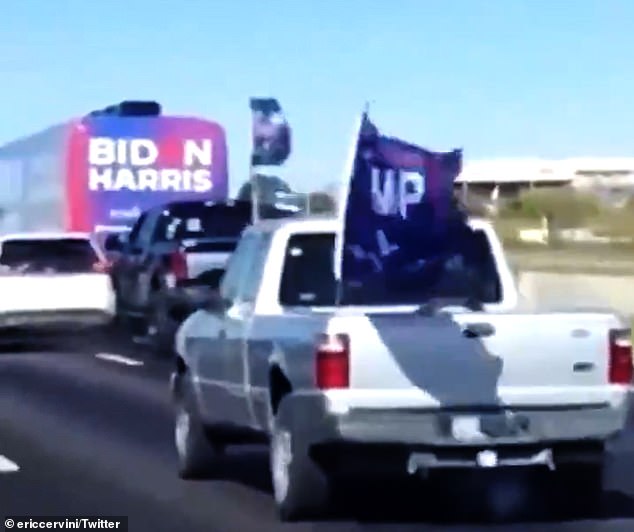 Several vehicles driven by Trump supporters who affixed Trump banners and flags to their SUVs surrounded the Biden-Harris campaign bus as it drove from San Antonio to Austin on October 30, 2020 (above). At one point, one of the ‘Trump Train’ vehicles collided with an SUV 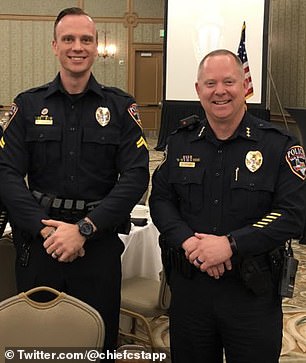 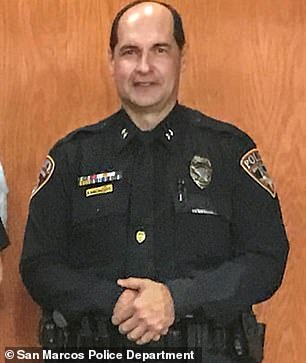 Videos shared on social media from October 30, 2020, show a group of cars and pickup trucks – many adorned with large Trump flags – riding alongside the campaign bus as it traveled from San Antonio to Austin.

The ‘Trump Train’ at times boxed in the bus.

At one point, one of the pickups collided with an SUV behind the bus, it is alleged, with a white Democrat SUV pictured with what appear to be dark tire marks on its side afterwards.

The Biden bus was traveling to San Marcos for a political event that Democrats ended up canceling.

Neither Biden nor his running mate, then-Senator Kamala Harris, were aboard.

Then-President Donald Trump criticized the FBI at the time after the agency said it was investigating, and hailed the ‘Trump train’ itself in a glowing tweet that read ‘I LOVE TEXAS!’

Police in later emails called it a ‘debacle’ and prepared for a ‘political fire storm.’

A report of the incident four days later cited ‘staffing issues, lack of time to plan, and lack of knowledge of the route’ as reasons police did not provide an escort.

The City of San Marcos has declined to comment, citing the pending legislation.

However, Lisa Prewitt, a former San Marcos City Council member who was a candidate for the county commission at the time, told the Tribune that she notified local law enforcement 24 hours before the event and mentioned safety concerns.