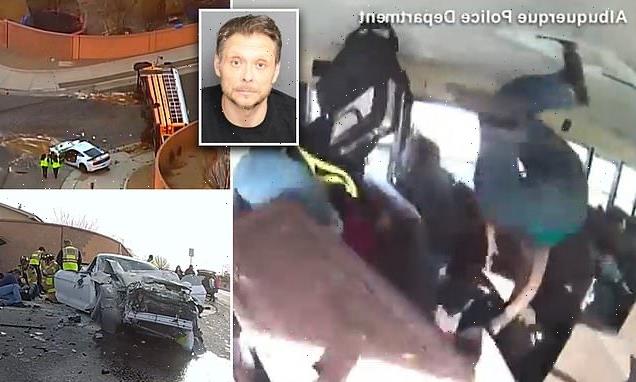 Newly released footage shows the shocking moment a school bus in Albuquerque was rammed by a street-racing Mustang, causing seven children to be hospitalized – two of whom were seriously injured.

In the video, the 23 middle schoolers can be seen chatting on their ride home from school, some milling between seats, in the moments before impact on February 23. Suddenly, they are flung to one side of the bus and then the other, sending their legs flailing, as the vehicle rolls onto its side.

Driver Mario Perez, 49, was driving about 110 miles per hour when he careened into the passenger side of the bus near its rear wheel around 5pm. He was racing a white Mustang westbound on Gibson Boulevard moments before the crash.

The posted speed limit on the street is 40mph – police still are searching for the driver of the other vehicle – another Mustang – who sped away after the wreck.

Perez, who was rushed to University of New Mexico Hospital with a broken femur, was not intoxicated when he hit the bus, according to the Albuquerque Police Department.

Seven of the George I. Sanchez Collaborative Community School students were taken to the hospital for medical checks. Two sustained serious injuries to their legs, including one with a broken femur, and 13-year-old Lula Maldanado suffered a pelvic fracture that required surgery, according to KOB 4. 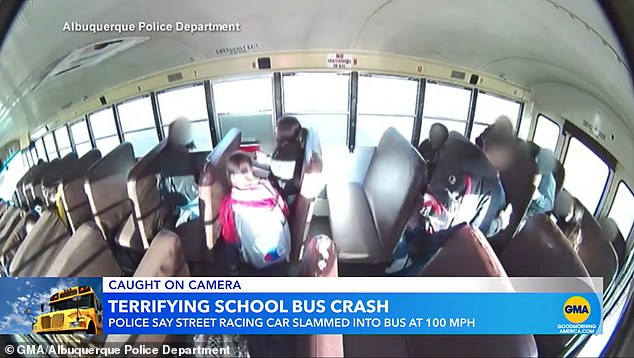 Twenty-three middle schoolers on their way home from George I. Sanchez Collaborative Community School can be seen chatting, some milling about the bus, in the moments before a street-racing Mustang careened into the bus February 23 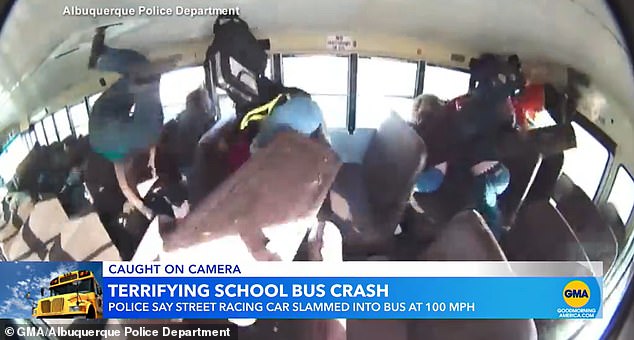 Surveillance footage from inside the bus shows the moment the Mustang hit the passenger side of the bus, slamming the children as it tips over 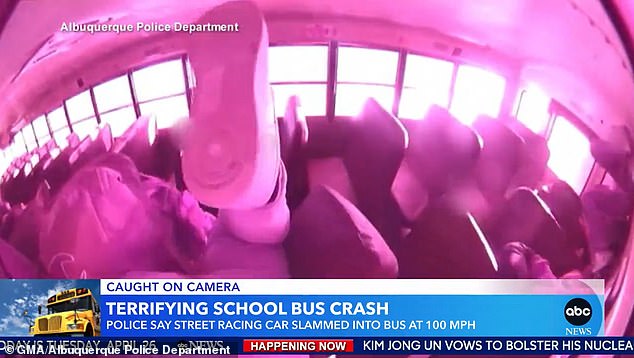 The students were flung to one side of the bus and then the other, legs flailing, as the vehicle rolled over onto its side 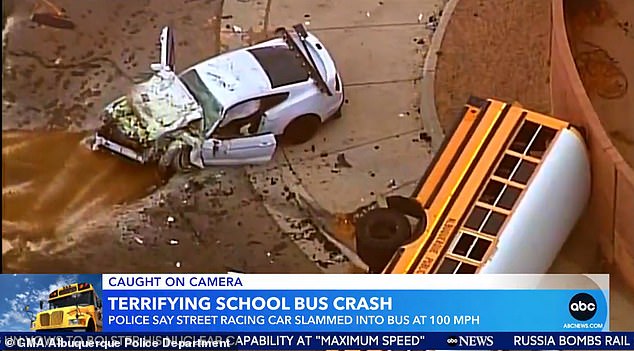 Police said that driver Mario Perez, 49, was traveling at 110 mph when he hit the bus

Although Maldanado’s family told outlets the surgery was successful, they are concerned with the psychological impact the crash may have on her and the other children.

‘These kids are going to go through this trauma for a while because every time they get on the bus they’re going to remember what happened,’ said Alfred Lucero, Lyla’s grandfather. ‘It’s something that stays with them for a while.’ 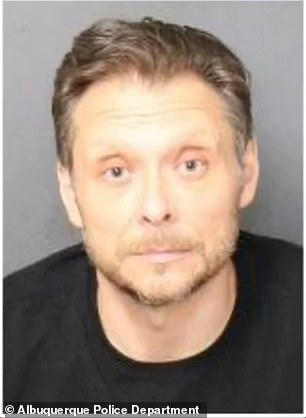 Mario Perez, 49 (pictured) was charged with two counts of recklessly driving causing great bodily harm, which carries up to six years in prison

‘They were racing,’ the bus driver told police. ‘There were two, a white car and the Mustang that’s there, all damaged. They were speeding on each lane.

‘And the guy didn’t have anywhere to go – so when I was across, this guy was beating him so he just went straight into me.’

Perez was charged with two counts of reckless driving causing great bodily harm, which carries up to six years in prison. He appeared in court on April 3 in a wheelchair with braces on each leg.

Although prosecutors tried to keep Perez jailed until his trial, he was released earlier this month by Judge Alisa Hart on the condition that he stay off the road, KOB reported. 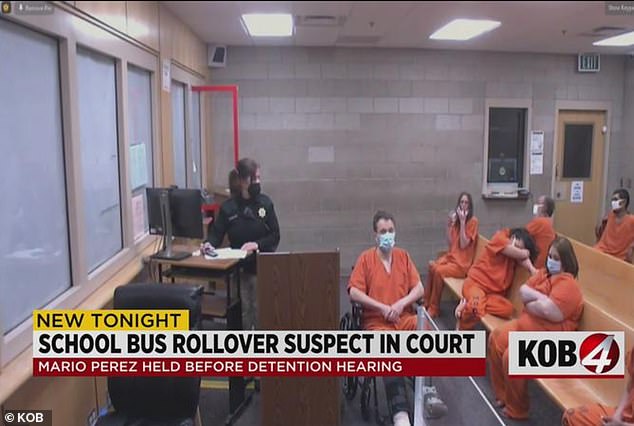 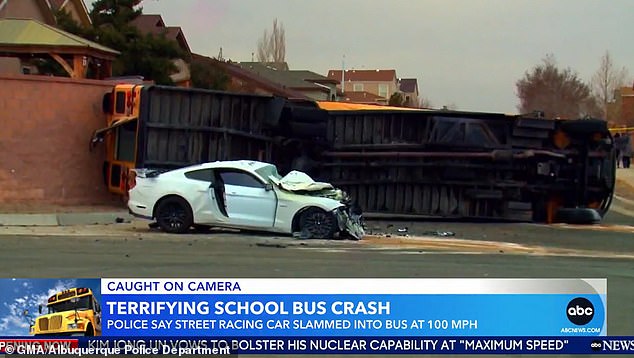 Police said they are still searching for the driver of the blue Mustang that was racing with Perez. Its driver fled the scene after the horrific crash 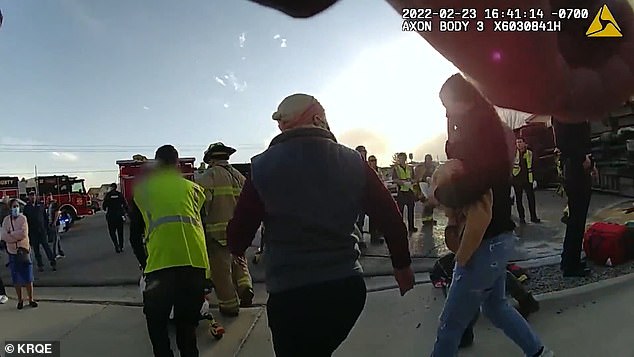 Albuquerque Mayor Tim Keller spoke out against the careless driver after the accident.

‘Those children on that bus could have died because people were literally just having fun in their sports cars. That should never be acceptable,’ Keller said at a press conference.

Perez and his wife live near the intersection of Gibson Boulevard and Messina Drive where the crash happened. His wife told KOB 4 that she didn’t believe he was at fault, and that she ‘heard the bus was at fault.’

When asked whether her husband had street raced before, she told the outlet that ‘he’s never done anything like that.’

‘I mean, he’s a real – he knows the law, you know? He loves his car. But he’s never hurt anybody or anything. He’s always been really careful about everything.’

Just hours before the crash occurred, the Albuquerque Police Department had announced an operation to crack down on reckless drivers in the city.

The National Transportation Safety Board recommends three-point safety belts on school buses, and that the 42 states without any bus seatbelt laws add that requirement.