London: Prue O'Donnell broke down in relief when getting ready to board the first repatriation flight bringing home tens of thousands of Australians stranded by the COVID-19 border bans.

The 24-year-old was one of 175 Australians who boarded QF110 which departed Heathrow, London just before midday on Thursday. 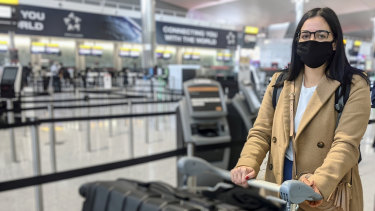 The flight is one of four that will operate over the next month, as part of the federal government's plan, in conjunction with the Northern Territory, to bring home more than 30,000 Australians stranded after the national cabinet capped quarantine places which restricted airlines to operating flights with an average 30 passengers each.

All 176 passengers were prioritised as they were classed as vulnerable; they have six months to repay the airfares which cost up to $2200.

Prue has been trying to get home to Melbourne since July – when the caps were first imposed – and has had three flights cancelled and lost £800 when STA travel went bankrupt.

"I'm really excited to go home, I didn't think I'd be home for Christmas, I'm very relieved," she said.

"DFAT's been awesome ever since they did the financial hardship loans, they were really attentive and answered every email and every phone call," she said. 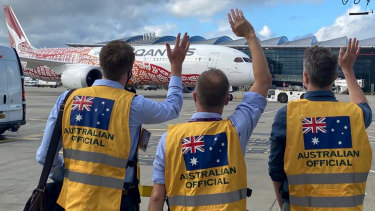 However, she said she had been upset by the vitriolic comments from some Australians at home who have flooded social media with little sympathy for their compatriots caught abroad.

"The thing that got me the most was people's awful comments, one of them made me cry, I had to log off," she said, becoming emotional.

"It was really awful to log onto social media and have people commenting that we should have been home, random people I don't know but it's quite confronting to be told you're not worth going home.

"I had a working paying job and if I came home I would have been a dole bludger.

"Your passport says at any time you're welcome to come into Australia so it's a bit of a slap in the face when you're not welcome back."

Brisbane couple Kate and Glenn Smith and their three children have lost count of how many times they've been bumped from their flights and have been homeless and living with neighbours since July.

She said the last few months have left her feeling "really angry" at the way Australians at home have rushed to blame expats. 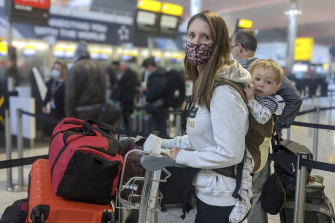 Kate Smith with her one-year-old son Lleyton at Heathrow Airport checking in for flight QF110 for Darwin.Credit:Latika Bourke

"To pack up a family of five, with a job, and a lease and a school to do that it would have had to have been done in less than a week, I don't even know if that's feasible," she said.

Like Prue, Kate shed tears of relief before even boarding the flight. 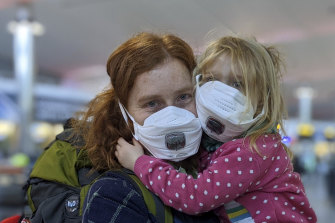 Kellie Tune with her daughter Ember (3) are relieved to be flying home to Australia.Credit:Latika Bourke

Kellie Tune and her three-and-a-half-year-old daughter were told two days ago that they had a seat on the plane but did not get their test results showing they did not have COVID-19 through in time for check-in.

The 41-year-old was one of 40 passengers who made use of the Heathrow Airport's brand new rapid testing facility which turns around results in one hour, at a cost of £80 although covered in this instance by taxpayers. 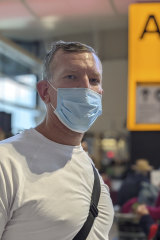 Robert is returning to Australia for medical treatment and says he should never have been prevented from entering his own country.Credit:Latika Bourke

She has been trying to get home for months but been repeatedly bumped from flights, like thousands of Australians who have been asked to pay business class fares with no guarantee of making their flights because of the quarantine caps.

Asked to describe how she had coped over the last few months, she began to cry.

"We've been shielding with Mum so it's been difficult," she said.

Robert is returning to Australia after one of his parents died as well as to get specialist medical treatment that he could not get in Britain because of the lockdown. He has been trying to get home for several months on his own means.

He said while he should never have been prevented from going home the High Commission staff in London had been a huge help.

"DFAT has jumped on board and helped me with a tough situation and within three days I've had a flight organised," he said.

"But I can tell its obviously going to take a lot of other people a long time but I jumped on the first flight," he said.

Qantas Cabin Manager Andrew Goh said some the crew were proud to be taking so many Australians home on the Dreamliner 787.

"It's a great privilege and opportunity here for us to bring Australians home that have been stranded overseas for a very long period of time so we are very proud and look forward to bringing them home." 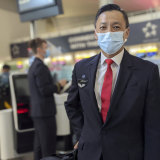 Qantas Cabin Manager Andrew Goh says he is proud to be flying home Australians who have been stranded in the UK.Credit:Latika Bourke

"There's a mixed bags of emotions, people are going to be travelling for different reasons and all they want to do is get home and we look forward to taking them home.

Goh's last flight was one of the repatriation flights from London in June but most of his colleagues had not flown since March.

The flight will land in Darwin on Friday and the passengers will undergo their 14-day quarantine at Howard Springs where it is hoped 5000 Australians will be able to quarantine over the next six months, in addition to the existing quarantine capacity.