Washington: When Ruth Bader Ginsberg died in mid-September, you could feel the tectonic plates of American politics shifting. Republicans announced almost immediately that they would move to fill the progressive icon's Supreme Court seat as soon as possible, setting up a highly-charged fight just weeks out from election day. Here was an issue, conservatives thought, that would fire up their base and shift the national conversation away from the coronavirus pandemic.

On Tuesday (AEDT) the nomination process came to end when the Senate voted to confirm Amy Coney Barrett in a 52-48 vote. Never before in US history has a Supreme Court justice been appointed so close to election day. 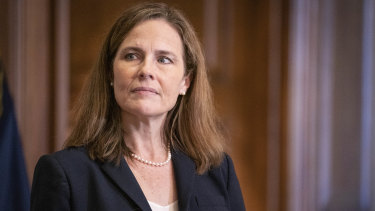 Amy Coney Barrett has been appointed to the US Supreme Court.Credit:Bloomberg

It's a sweet moment for Republicans, locking in a 6-3 conservative majority on the nation's most powerful court. President Donald Trump has now appointed three justices to the court in four years – more than Barack Obama, George W Bush or Bill Clinton appointed during their two-term presidencies.

Aged just 48, Barrett will likely sit on the bench for decades to come. And while some justices go "rogue" after being appointed, Republicans feel confident that Barrett will be a solid conservative vote on issues such as abortion and gun rights.

"This is the most openly pro-life judicial nominee to the Supreme Court in my lifetime," Republican Senator Josh Hawley said as the final confirmation vote approached. "This is an individual who has been open in her criticism of that illegitimate decision: Roe vs Wade."

Barrett's influence could be felt almost immediately if the Supreme Court is called upon to decide any disputes arising from the election. Democrats have called for Barrett to recuse herself from any election-related cases given Trump has explicitly said he wanted her on the court for this purpose. But it's rare for Supreme Court justices to recuse themselves from big cases, and Barrett did not commit to doing so at her nomination hearings.

Democrats, meanwhile, are incensed. They already believed that Republican Senate Leader Mitch McConnell "stole" a Supreme Court nominee from them in 2016 when he declined to hold hearings for Obama's pick Merrick Garland. Now they have suffered the indignity of Trump appointing a justice just eight days before the election. 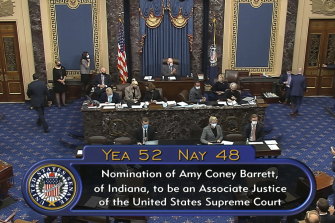 The vote total in the US Senate on the confirmation of Amy Coney Barrett to become a Supreme Court justice.Credit:Senate TV/AP

Republicans haven't broken any rules but their hardball tactics have escalated the winner-takes-all dynamic in the Senate. If Democrats win control of the Senate majority next week, expect a big push to abolish the filibuster — a procedural quirk that requires a high threshold of 60 votes to pass most legislation.

But in terms of shaking up the election, the Supreme Court fight has been something of a fizzer. As historic as the turn of events was, there's no sign they changed the campaign in a fundamental way.

At a campaign rally in Pennsylvania just hours before Barrett's confirmation, Trump didn't mention her until almost an hour into his speech, a sign his campaign does not believe it is a vote-changer. Those excited by the issue — be they Republicans or Democrats — knew who they were going to vote for already.

Our weekly newsletter delivers expert analysis of the race to the White House from our US correspondent Matthew Knott. Sign up for the Herald‘s newsletter here, The Age‘s here, Brisbane Times‘ here and WAtoday‘s here.