Surge in anti-Semitic attacks `surpasses anything seen before´

‘Horrific surge’ in anti-Semitic attacks in the past four weeks alone linked to violence in Israel and Gaza has already surpassed the total for any month since records began, campaigners warn

A ‘horrific surge’ in anti-Semitic attacks in the past month has ‘surpassed anything we have seen before’, campaigners have said.

The Community Security Trust (CST) recorded 351 anti-Semitic incidents between May 8 and 31, already surpassing the highest total for any single month since records began.

The spike has been linked to the escalation of violence in Israel and Gaza.

The CST said the rise was fuelled by anti-Semitic reactions to the conflict and called it ‘utterly predictable and completely disgraceful’.

There are concerns the situation will only worsen as violence in the Middle East continues.

The Campaign Against Antisemitism cited physical beatings and vandalism, chants and placards at rallies, social media abuse and threats to Jewish children at schools and universities as examples of the hostility faced by the community.

‘None of these should be features of life in Britain in 2021, but they are for Jewish people,’ a spokesperson said. 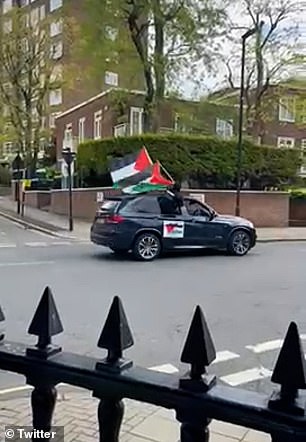 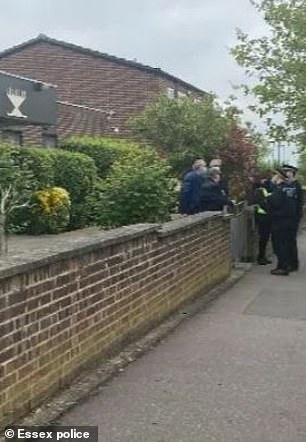 The Community Security Trust (CST) recorded 351 anti-Semitic incidents between May 8 and 31. Pictured: Previous incidents of alleged anti-Semitism include a convoy of cars with Palestinian flags made threats against Jewish people (left) and police at the scene where a rabbi was attacked 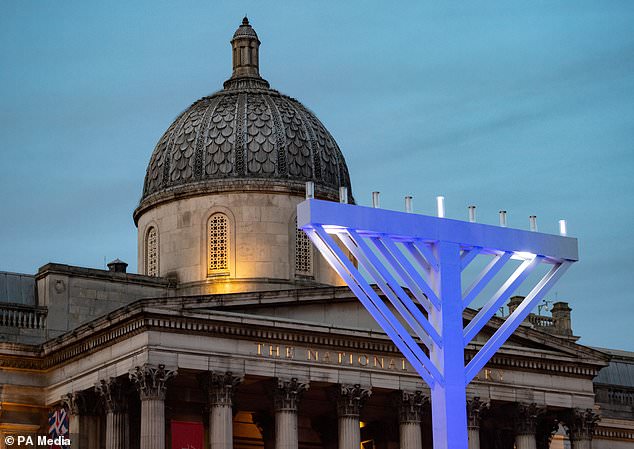 The figures already surpass the highest total for any single month since records began. Pictured: The Trafalgar Square menorah

‘Ultimately, the blame lies with the racist perpetrators of these cowardly incidents. But some politicians, the media, social media companies and others have done their part in tolerating or even stoking the hate.

‘It is vital that the police investigate incidents as they arise and bring offenders to justice.

‘In a year defined by solidarity against racism worldwide, it is extraordinary how little support there is out there for Britain’s Jews. Racism against Jews just doesn’t seem to count.’

Board of Deputies of British Jews President Marie van der Zyl added: ‘The past few weeks have been terrifying for the UK Jewish community as both physical and online attacks have increased exponentially. 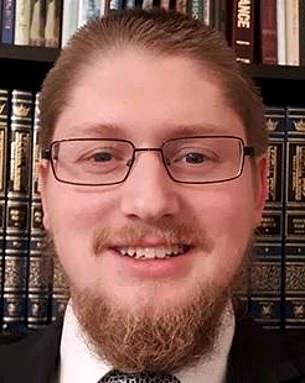 ‘Jews in this country have been subjected to far-right racism for many years and this continues. However, increasingly, the threat has also come from the extreme left under the thin disguise of anti-Zionism and opposition to Israel.

‘This erupts every time there is a conflict in the Middle East. It should not be confused with legitimate criticism of the Israeli Government.

‘This is visceral hatred expressed through ancient tropes and cannot be sanctioned in a modern democracy.’

In one incident, a man stopped Jewish secondary school students and threatened to punch them if they did not say they supported Palestine.

He then said: ‘Tell your f****** mum and dad they are murderers and killing babies.’

In another case, a rabbi was attacked near his synagogue in north London.

Two men have since appeared in court accused of assaulting Rabbi Rafi Goodwin who was allegedly struck over the head with a concrete brick.

Colchester Magistrates’ Court heard from prosecutors that Abderrahman Brahimi, 25, and Souraka Djabouri, 18, allegedly forced him out of his car before beating him in the street, after reportedly saying ‘he’s a Jew’.

On the same day, four men were arrested and bailed after passengers in a convoy of cars with Palestinian flags used offensive language and made threats against Jewish people in the St John’s Wood area of London.

It prompted Prime Minister Boris Johnson to publicy denounce anti-semitism, posting on Twitter: ‘There is no place for anti-Semitism in our society.

‘Ahead of Shavuot, I stand with Britain’s Jews who should not have to endure the type of shameful racism we have seen today’ 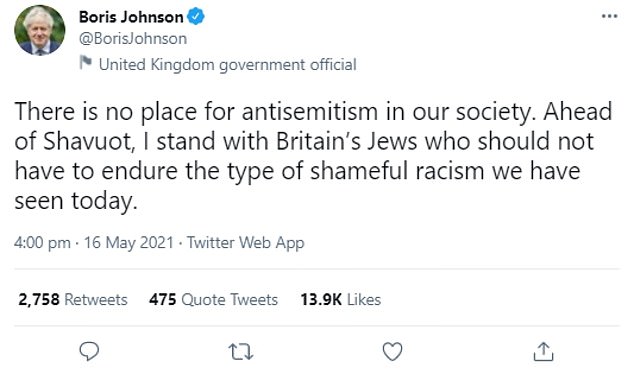 Prime Minister Mr Johnson Tweeted: ‘There is no place for anti-Semitism in our society. Ahead of Shavuot, I stand with Britain’s Jews who should not have to endure the type of shameful racism we have seen today’

Describing anti-Semitism as ‘abhorrent’, he condemned a ‘concerning increase in anti-Semitic incidents in some schools’ in this country amid the Israel-Gaza violence.

The previous highest number of anti-Semitic incidents was recorded in July 2014, with 317, also coinciding with an escalation of violence in the Middle East. 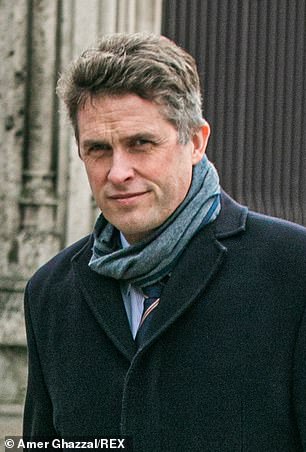 But campaigners fear the situation may worsen still.

A statement from the CST said: ‘CST expects the levels of antisemitism to continue, or indeed worsen, until the conflict in Israel and Gaza subsides.’

They urged Britain’s Jewish community to be ‘calm but vigilant’ and encouraged them to report any anti-Semitic behaviour to police.

In light of the figures, Jewish organisations across the UK called for campaigners and community groups to work together to stamp out anti-semitism.

A spokesperson for the Jewish Council for Racial Equality told Mail Online: ‘It’s important for all groups to work together and to get governments both national and locally to say what needs to happen [to end anti-Semitic abuse]. That needs to be accelerated.

‘To have abusive people walking down the street is just unacceptable.’

A spokesperson for Campaign Against Antisemitism added: ‘The surge in antisemitism has been tolerated, if not fuelled by, activists who appear to believe that racism directed at Jews simply does not count.

‘While they are rightly sensitive to the nuanced manifestations of other forms of racism, they show no interest in understanding the oldest and most variegated hatred of all.

‘Indeed across social media, campuses and recently on the frontline of British politics there are active efforts to stymie attempts by the Jewish community to inform the public of what constitutes contemporary antisemitism.

‘No other minority would be treated in this way, and this antisemitism-denial has been recognised by the EHRC as part of the victimisation of Jews.’

The figures were released amid a period of political upheaval in Israel. 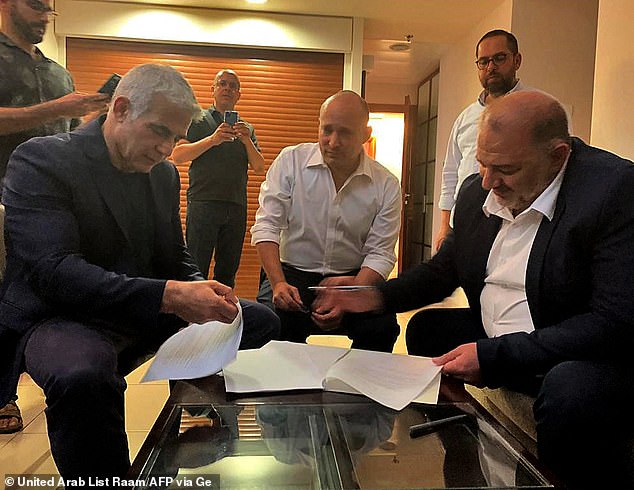 Prime Minister Benjamin Netanyahu’s opponents announced they have reached a deal to form a new governing coalition, paving the way for the removal of the long-time Israeli leader. Pictured: Three opposition leaders (From left: Lapid, Bennett, Abbas) signing an agreement amid the talks on Wednesday

Prime Minister Benjamin Netanyahu’s opponents announced they have reached a deal to form a new governing coalition, paving the way for the removal of the long-time Israeli leader.

The dramatic announcement by opposition leader Yair Lapid and his main coalition partner, Naftali Bennett, came a matter of minutes before a midnight deadline, and prevented the country from plunging into what would have been its fifth consecutive election in just over two years.

It came after he signed a pact with Bennett and his nationalist New Right party, and Mansour Abbas, leader of the Islamist United Arab List party.

Under the agreement, Lapid and Bennett will split the job of prime minister in a rotation. Bennett will serve the first two years, while Lapid is to serve the final two years. The historic deal also includes a small Islamist party, the United Arab List, which would make it the first Arab party ever to be part of a governing coalition.