Didn’t we bounce back! Smiles return to the High Street as stores, gyms and pubs reopen again after second coronavirus lockdown

Bargain hunters took advantage of a retail ‘fire sale’ triggered by the collapse of Debenhams and the Arcadia group, which includes Topshop.

They crushed together to get into stores across the country. The queues outside JD Sports on London’s Oxford Street were particularly long.

Retailers are pinning their hopes on a last-minute Christmas rush, starting yesterday on what some called ‘Wild Wednesday’. 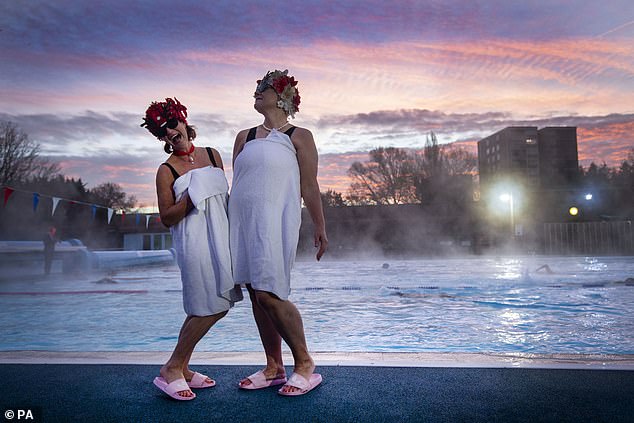 Jessica Walker and Nicola Foster, known as the Lido Ladies, pose by the pool during sunrise before swimming at Charlton Lido in Hornfair Park, London, on its first day of reopening after the second national lockdown ended in England 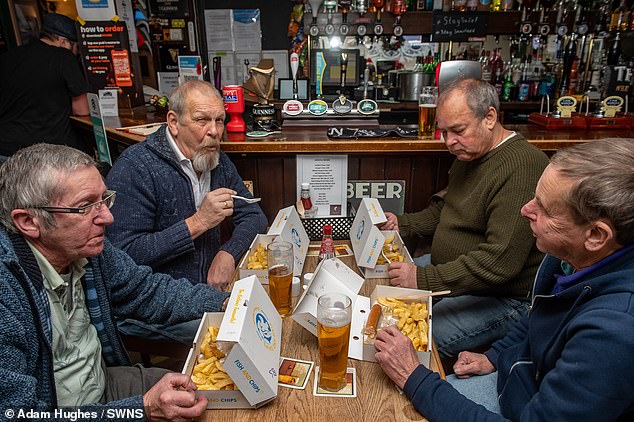 People eat fish and chips with pints of beer at St John’s Fish Bar in the Brewers Arms, Worcester, on Wednesday

Fitness fans were also able to get back into gyms and swimming pools – some even enjoying an outdoor dip at sunrise – while golfers were able to tee off and those in need of a trim were able to see their hairdressers and barbers again.

Henry’s Barber shop in Newcastle was among those fully booked on the first day back.

Bars and restaurants reported seeing strong trade after those under Tier Two restrictions were allowed to open for the first time in a month.

Drinks could be served only alongside a substantial meal – amid debate over whether a scotch egg qualified. 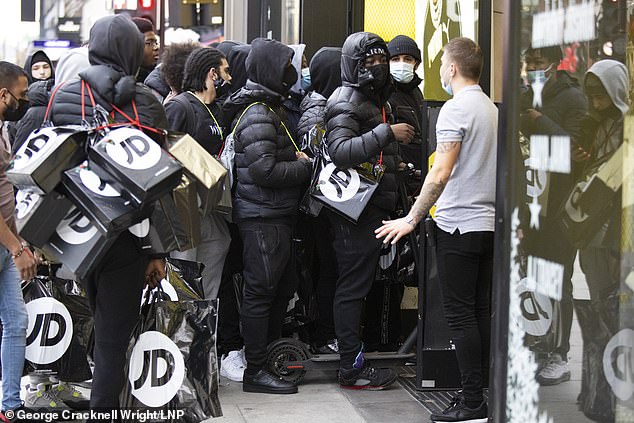 Shoppers queue outside a branch of JD Sports on Oxford Street, London, on Wednesday as the country came out of national lockdown 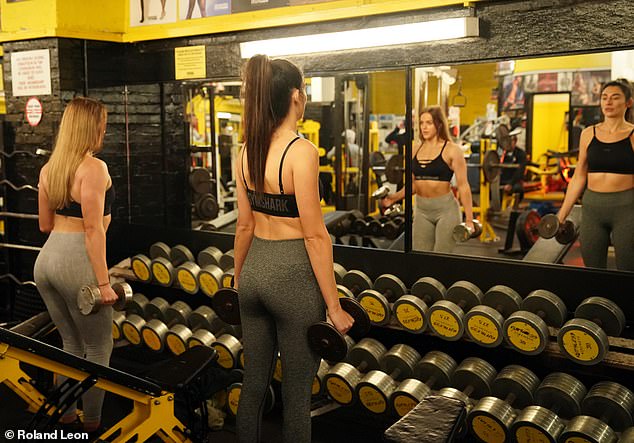 Landlords used ingenious ways to get around the rules. One pub in Worcester opened for drinks so long as customers ordered food from the chippy next door.

Restrictions say that those eating indoors at pubs in Tier Two areas should do so only with members of their own household or bubble. In outdoor areas – such as pub beer gardens – groups of up to six can meet.

Bars, pubs and restaurants must say shut in Tier Three areas. However, retailers were able to open across the country.

Shoppers began queueing as early as 5am outside outlets of Primark, which opened at 7am – the first time for four weeks it could welcome customers in England. 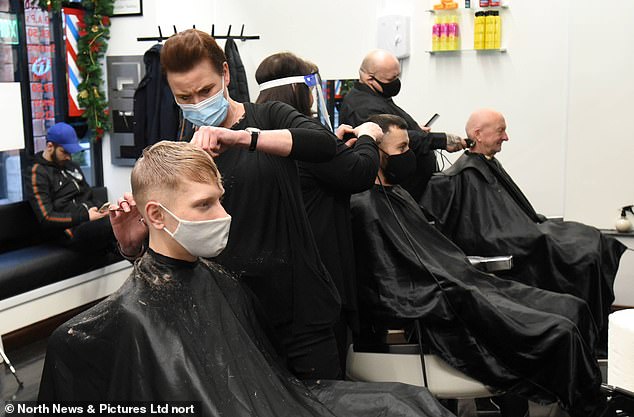 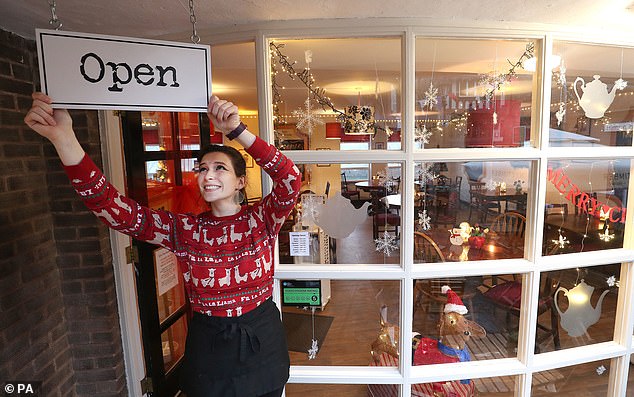 Harriet Henry, manager of The Tea Room in Knutsford, hangs an open sign outside her cafe on Wednesday as England came out of national lockdown

Many of the chain’s stores will be trading until midnight through the festive season, with 11 set to open around the clock.

The crisis at Arcadia and Debenhams will see massive reductions as they try to shift Christmas stock ahead of pulling down the shutters for good.

The moves will inevitably drag other retailers – from Gap, Zara and H&M to Marks & Spencer, which are already promoting reductions – into the fray if they want to grab a bigger share of festive spending. 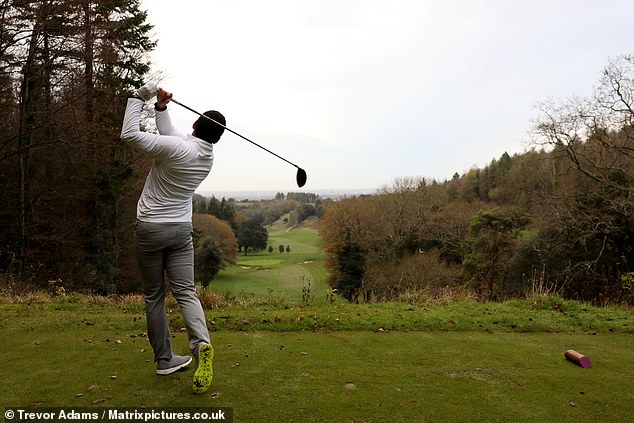 Significantly, any reductions at Debenhams will have to be matched by its closest rival John Lewis under its ‘Never knowingly undersold’ price promise.

Queues snaked around the block outside Primark and JD Sports outlets in London, Manchester, Birmingham and Newcastle.

Primark’s CEO Paul Marchant, who has led the charge for extended opening hours, said: ‘We are delighted to reopen our stores in England with longer shopping hours to give our customers more time to safely do their festive shopping. 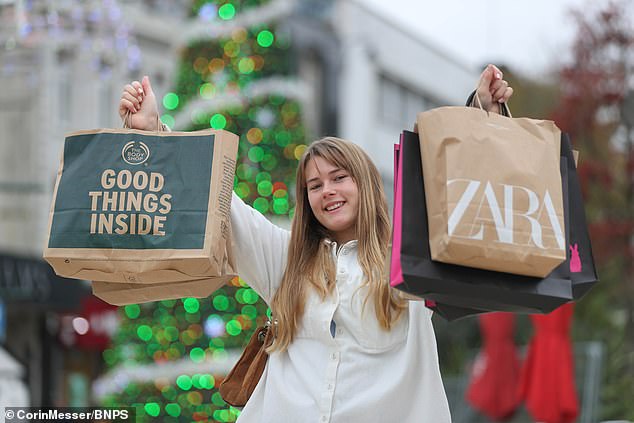 Felicity Fielding, 18, celebrates the shops reopening on Wednesday in Bournemouth as the country comes out of national lockdown

‘All of our extensive safety measures remain in place to help ensure that shopping at Primark is an enjoyable, safe experience for everyone.’

Jace Tyrrell, chief executive of London’s New West End Company, said: ‘We have seen a consistent stream of shoppers with footfall up 165 per cent compared with last week.

‘It’s wonderful to see the district’s iconic stores once again open for business, but we still have much to do if they are to make back some of their lost trade in these vital few weeks to Christmas. 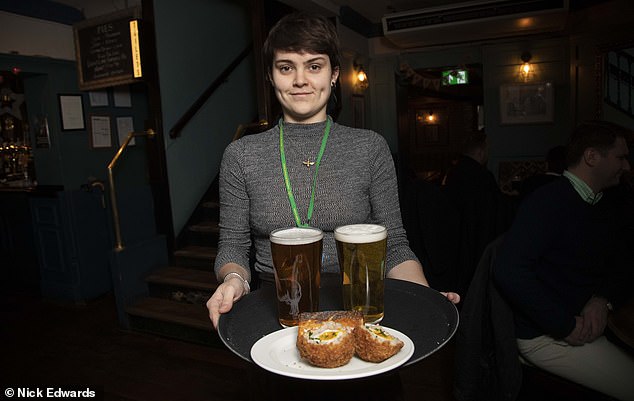 A barmaid at the Windmill Pub in Mayfair, London servers beers with a Scotch egg on Wednesday

Hopes that total takings across UK stores and websites would eclipse last week’s Black Friday event were dashed, however.

Rob Cameron, the chief executive of Barclaycard Payments, said: ‘Even with some stores staying open until much later this evening, it’s looking unlikely that today will overtake Black Friday.

‘Instead, retailers will probably have to wait until Saturday – the first non-working day following stores reopening this week – to hit that milestone.’