U.S. stock declines accelerated into the close on Friday as the major equity indexes ended a volatile month lower.

The S&P 500, Dow Jones Industrial Average and Nasdaq Composite each sank. The S&P 500 ended Friday's session lower by 3.6%, and dropped about 8.8% for April to post its worst monthly performance since March 2020. The Dow dropped 4.9% for the month. The Nasdaq Composite was the biggest laggard, sliding by more than 13% in April alone in the index's worst month since October 2008.

A day earlier earlier, the S&P 500 closed out Thursday's session sharply higher, gaining 2.5%, while the Nasdaq Composite rose by 3.1% in its best day since March 16. Still, the S&P 500 still posted its third monthly decline so far in 2022, even during a month that is typically seasonally solid for equities.

Volatility has resurged in recent weeks amid concerns over whether tighter monetary policies from the Federal Reserve might derail the economy. And these fears compounded with lingering jitters over persistent inflation, geopolitical turmoil and an ongoing COVID outbreak in China. The S&P 500 was on track for an about 5% drop in April, based on Thursday's closing level.

Plus, the data this week on corporate profits and the broad economy have shown signs of decelerating growth. Results from Big Tech companies including Alphabet and Twitter pointed to a slowdown in online ad businesses as companies pull back on marketing spending in the wake of moderating consumer demand. And throughout this earnings season, a plethora of companies across industries have pointed to elevated input and labor costs, as well as ongoing supply chain disruptions.

Against this backdrop, the U.S. economy contracted for the first time since the second quarter of 2020 at the start of this year, government data Thursday showed. The 1.4% annualized contraction in first-quarter U.S. GDP came as net trade, inventories and government investment each weighed on overall domestic output, and as consumer spending came in less robustly than expected.

However, the weaker-than-expected GDP print may also bolster the case for members of the Federal Reserve to exercise more caution as they prepare to raise interest rates further and begin rolling assets off the central bank's balance sheet. These moves would raise borrowing costs and help bring down demand to stem inflation — but also risk tipping the economy into a deeper downturn if financial conditions tighten too quickly.

“There’s just so much concern around, do we go into a recession in the next 24 months because the Fed may just raise interest rates too much?” Ryan Payne, Payne Capital Management president, told Yahoo Finance Live. “I think that’s what’s really weighing on the markets, and more so than the fact that we have a war in Ukraine and these inflationary numbers have just been through the roof.”

The University of Michigan's closely watched consumer sentiment index was revised down slightly in the final April print, though the index still held well above March's levels.

"The downward slide in confidence represents the impact of uncertainty, which began with the pandemic and was reinforced by cross-currents, including the negative impact of inflation and higher interest rates, and the positive impact of a persistently strong labor market and rising wages," Richard Curtin, Surveys of Consumer chief economist, wrote in a press statement Friday. "The global economy has added even more uncertainties about prospects for the U.S. economy, including the growing involvement in the military support for Ukraine, and renewed supply line disruptions from the COVID crisis in China."

"Moreover, consumers have lost confidence in economic policies, with fiscal actions increasingly hampered by partisanship in the run-up to the Congressional elections," he added.

A subindex tracking consumers' 1-year inflation expectations held steady at 5.4%, which matched March's level for the highest since 1981.

Consumers continued to spend in March despite elevated inflation.

Personal spending rose 1.1% last month, the Bureau of Economic Analysis said in a report Friday. This was well above the 0.6% rate consensus economists were expecting, according to Bloomberg consensus data. And February's spending rate was also revised higher to 0.6%, from the 0.2% previously reported.

Real personal spending, which adjusts for inflation, posted a surprise increase of 0.2%, whereas consensus economists were looking for a decline of 0.1% in March. February's real personal spending was also upwardly revised to show a 0.1% increase, from the 0.4% drop previously reported.

Personal income edged higher by 0.5% in March following a 0.7% increase in February.

The Bureau of Economic Analysis said Friday that personal consumption expenditures (PCE) increased at a 0.9% monthly rate in March compared to a 0.5% rate in February. On a year-over-year basis, PCE rose 6.6%, also accelerating compared to the 6.3% clip during the prior month.

However, excluding volatile food and energy prices, core PCE inflation showed some signs of moderating. Core PCE rose 0.3% in March to match February's rate. And over last year, the core PCE increased by 5.2%, slowing from February's downwardly revised rate of 5.3%.

Here's where markets were trading Friday morning ahead of the opening bell: 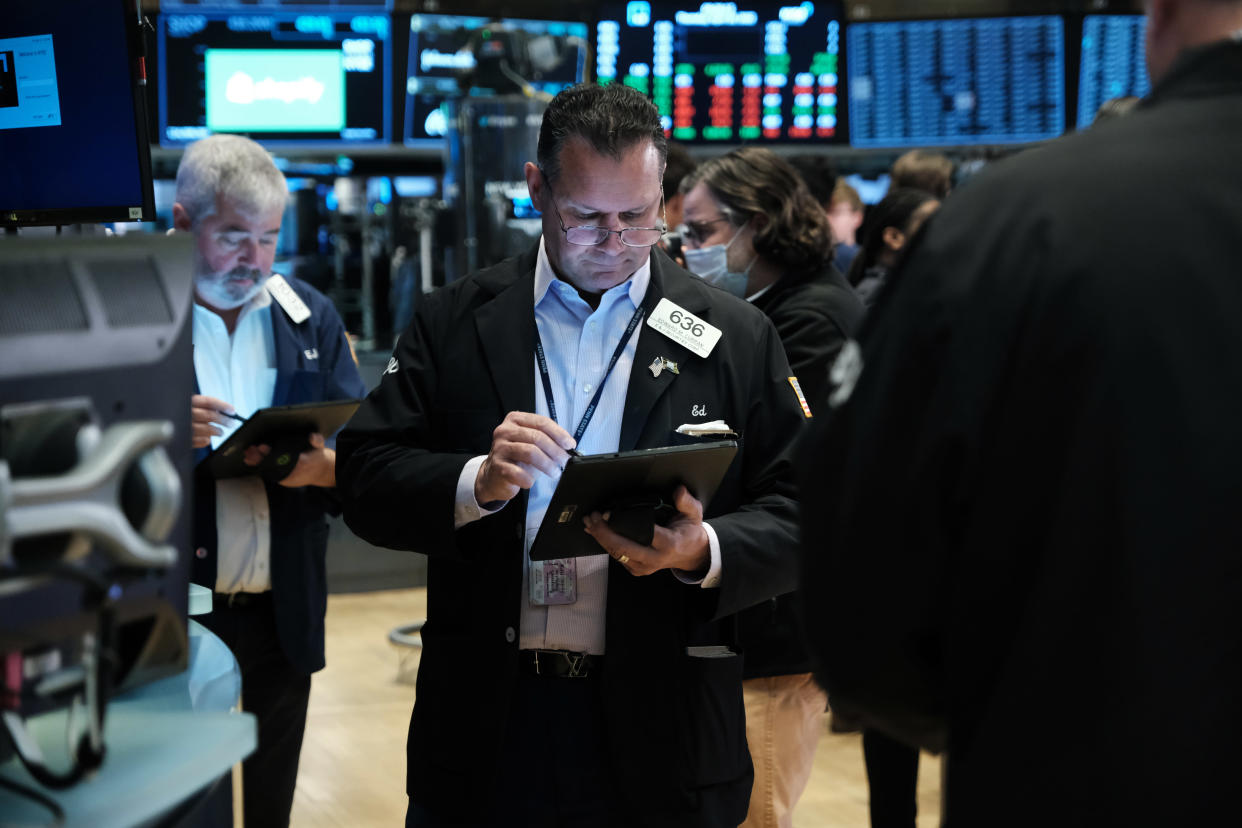