‘The worst sort of busybodies!’ Plan for ‘Covid-secure marshals’ who will enforce rules on social gatherings sparks fears of an army of power-hungry jobsworths

Boris Johnson’s army of ‘Covid marshals’ who will enforce new rules on social gatherings was mocked on Twitter this evening.

From Monday it will be illegal to assemble in groups of seven or more anywhere in England, whether indoors or out, and the Prime Minister announced specific workers will be introduced to help ensure social distancing in town and city centres.

However, dozens of people took to social media to ridicule the idea, and described them as sounding like ‘the worst sort of busybodies’.

In a series of memes, users compared the marshals to popular bumbling TV characters such as Keith Lard from Phoenix Nights, The Simpsons’ Chief Wiggum and Gareth Keenan from The Office. 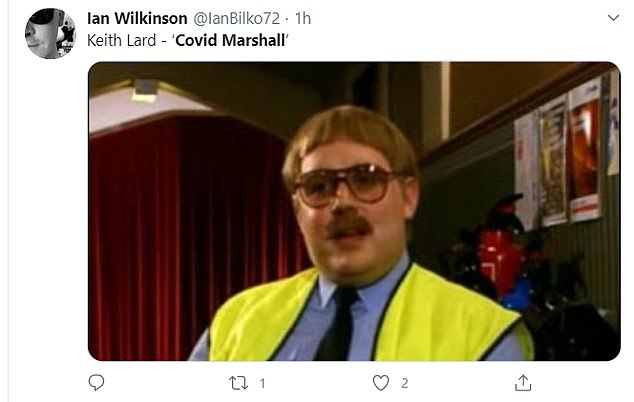 In a series of memes, social media users compared the Covid marshals to popular bumbling TV characters such as Keith Lard from Phoenix Nights 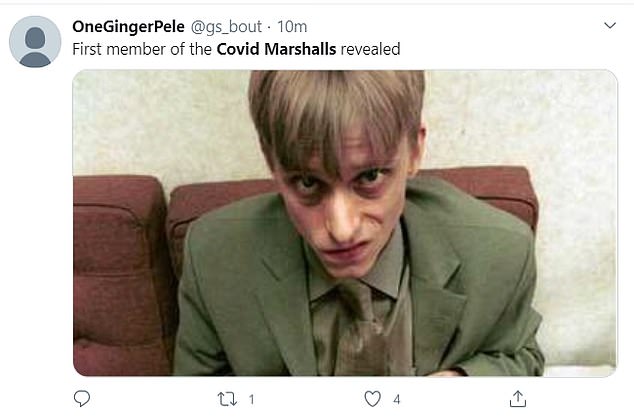 Gareth Keenan, assistant to the regional manager in The Office, was also suggested as someone who the marshals could be modelled on 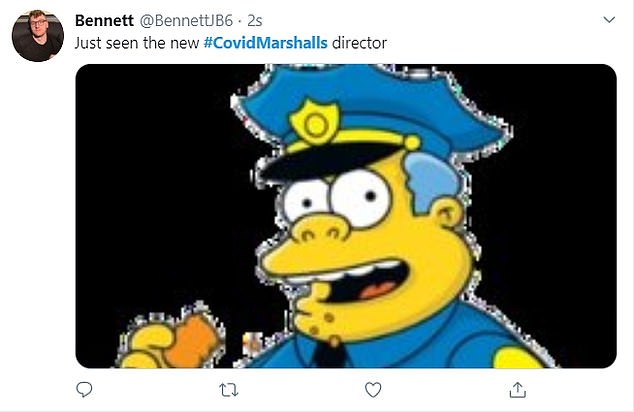 It comes as Mr Johnson warned the draconian new restrictions could be here for months – as chief medical officer Chris Whitty pointed the finger at ‘Generation Z’ for sparking a surge in cases.

The PM signalled that the ‘rule of six’ limit on how many people can socialise together will be in place for some time to come, after partying among the younger generation fuelled a sharp rise.

He said the spike in infections seen over the past week left him no choice but to tighten lockdown across England for the first time since March.

The limit – sparked by concern that partying young people are fuelling a flare-up – is a dramatic reduction on the maximum of 30 put in place on July 4.

Those breaking the rules can expect a £100 fine from police, which will then double on each repeat offence up to £3,200, with the Covid marshals also introduced in a bid to improve the enforcement capacity of local authorities.

Apart from a vaccine, Mr Johnson said the only other way out before Christmas was a ‘moonshot’ of introducing mass daily testing for everyone, but admitted that would require ‘everything to come together’.

In a direct plea to young people, Mr Johnson said that they should consider their behaviour ‘for the sake of your parents’ and your grandparents’ health’.

Prof Whitty said the numbers of coronavirus case have been increasing ‘much more rapidly’ over the past few days. While the numbers among older people and children remained ‘flat’, in other age groups there were ‘rapid upticks’.

He said among 17 to 18 year-olds and 19 to 21 year-olds the numbers had gone up ‘really quite steeply’ since mid August.

He said that data suggested that without action Britain would be on a path ‘extremely similar’ to France where the numbers have continued to rise – cautioning that the situation was likely to be perilous all the way through to Spring.

Government sources have voiced gloom about a ‘difficult six months’ to come. One official cautioned that it was not a scenario of ‘a couple of weeks and we’re back to where we were’, saying the R number was ‘clearly above one’.

Mr Johnson said he was ‘sorry’ that larger households would not be able to meet up, as they would be above the six-person threshold.

‘But as your PM I must do what it takes to stop the spread of the virus,’ he added.