Smoke from California’s wildfires likely killed more than 1,200 people – nearly 50 times the number who perished in the flames 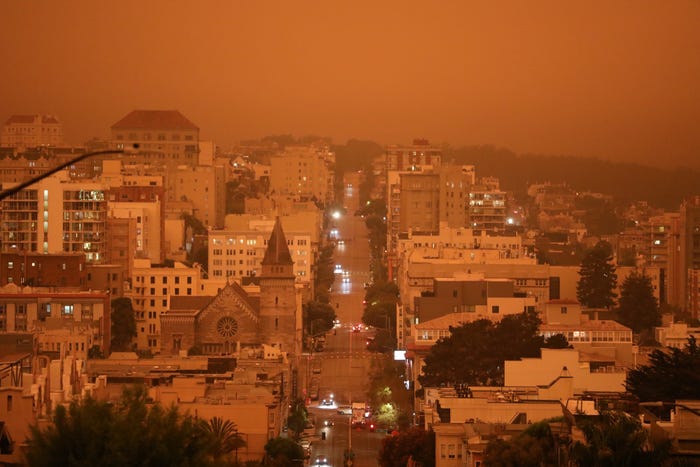 Wildfires have taken a terrible toll on the West Coast this summer. In California alone, the flames have burned more than 3.6 million acres, destroyed nearly 7,200 structures, and killed at least 26 people.

But a new analysis suggests that the total death count from the fires could be more than 50 times higher than official estimates when a secondary culprit is factored in: smoke.

Between August 1 and September 10, poor air quality driven by wildfire smoke likely killed 1,200 people, according to estimates from researchers at Stanford University. That number could be as high as 3,000 deaths, based on their calculations.

The smoke-related deaths they calculated are among people 65 and older – a population that's especially vulnerable to the impacts of particulate matter and among which preexisting conditions like diabetes and respiratory ailments are common.

"These are hidden deaths," Marshall Burke, an associate professor at Stanford who calculated the death toll, told The Mercury News. "These are people who were probably already sick but for whom air pollution made them even sicker."

Small particles from wildfire smoke can burrow into lungs

The researchers' estimate relies on data from a 2019 study that analyzed the impact of poor air quality on deaths and emergency room visits among people over 65. Air quality for both studies was measured based on levels of PM2.5: fine particles no more than 2.5 micrometers across. This is the main pollutant from wildfire smoke.

When inhaled, the tiny particles can burrow deep into the lungs and bloodstream, causing inflammation. Research has connected PM2.5 pollution to a higher risk of heart attacks, strokes, and premature death. Even in healthy young people, PM2.5 can irritate the eyes and lungs and cause difficulty breathing.

The 2019 study found that for every additional microgram per cubic meter of PM2.5, deaths among the elderly increased by 0.7 per 1 million people over the subsequent three days, and ER visits went up by 2.7 per million.

The Stanford researchers applied that to the concentration of particulate matter in the air in California between August 1 and September 10, the period when the state's biggest wildfires raged. In those weeks, California air had an average of 300 more micrograms per cubic meter of PM2.5 than normal.

Given that there are about 6 million people older than 65 in California, the researchers concluded the state probably saw 1,200 additional deaths and 4,800 ER visits because of the wildfire smoke. When accounting for the smoke's effect on people over the following month, the number rose to 3,000 extra deaths.

"This is just in CA alone! And just for people aged 65+," Burke wrote in a blog post explaining his calculations. "Oregon and Washington are being hit very hard right now too, and non-elderly are also surely affected. So this is likely a substantial lower bound on total health costs."

Oregon and Washington both saw dangerously poor air quality from early to mid-September. In some parts of both states, air quality levels were literally off the charts – PM2.5 levels exceeded the range of the EPA's air quality index (AQI), which measures pollutants in the air.

Combined, the two states have around 2 million people over 65, according to census data.

Additionally, the Stanford researchers noted that their calculations didn't factor in COVID-19. Because the disease impacts the respiratory system, it's very possible their numbers underestimate the total death count for that reason as well.

The relationship between COVID-19 and wildfire smoke isn't well-studied yet, but researchers have already expressed concern that smoke's detrimental effect on the lungs could make COVID-19 hit vulnerable people extra hard and vice versa.