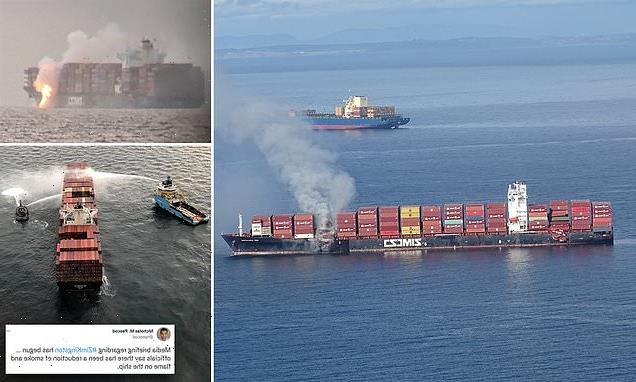 Sixteen workers are evacuated from container ship that is still burning off the west coast of Canada a day after after toxic chemicals combusted and 40 containers fell overboard, amid worsening supply chain shortage

A total of 16 crew members were rescued from a burning container ship off the coast of British Columbia after toxic chemicals combusted and caused 40 shipping containers to fall overboard.

The fire had broken out on the MV Zim Kingston after two of the containers that fell overboard on Friday were discovered to be storing a hazardous chemical called potassium amylxanthate.

Crew were en route to Vancouver when it was spotted.

That blaze continues to burn Sunday, although officials insist it is under control.

The Canadian Coast Guard with the US to obtain the missing containers as the global supply chain shortage continues to worsen for both countries.

Five other crew members stayed on the ship to stop the fire but none were injured as a result, according to Danaos Shipping Co, the company that manages the container ship. 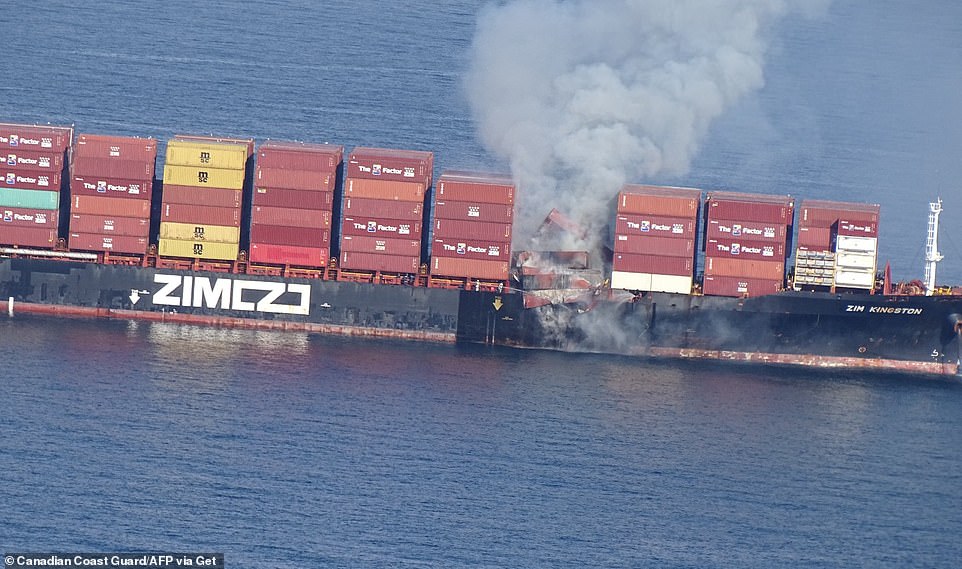 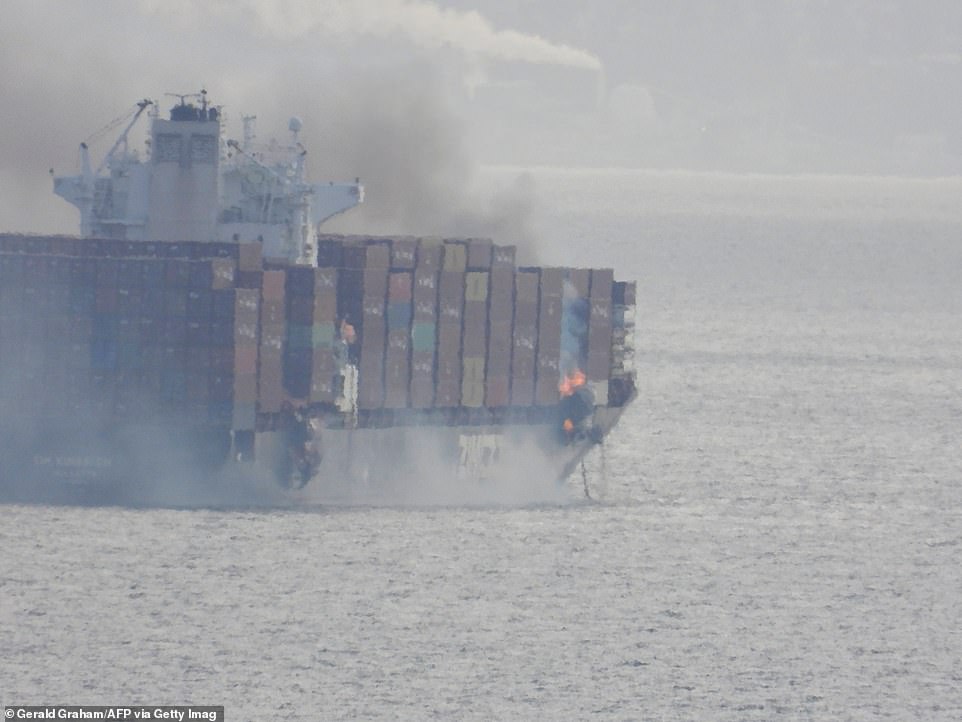 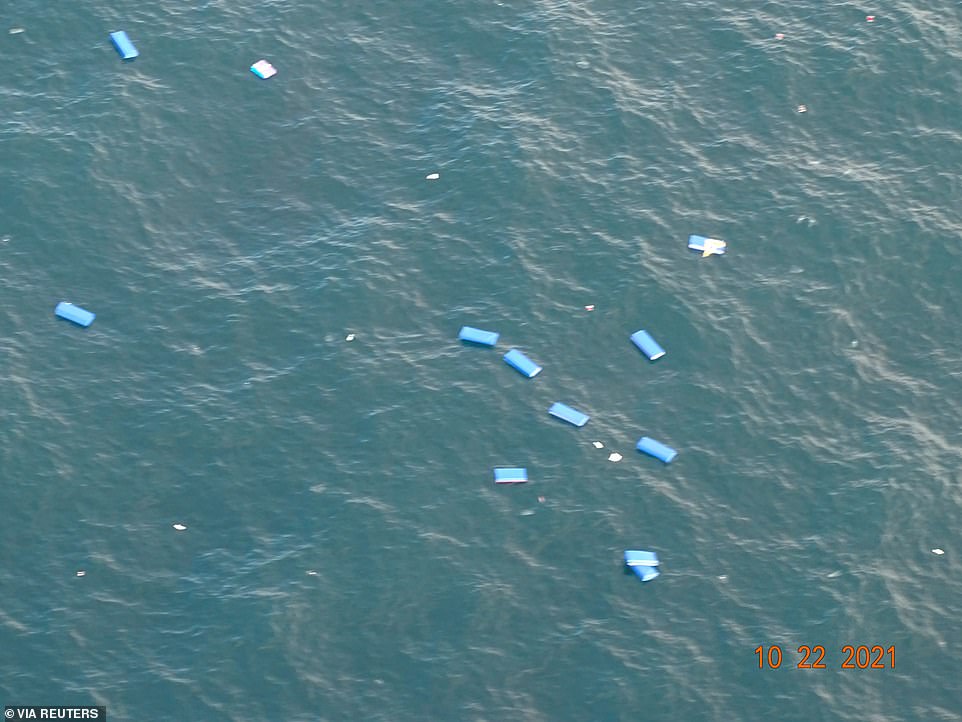 ‘Overnight the tug Seaspan Raven has cooled the hull of the M/V #ZimKingston by spraying the hull with cold water,’ the coast guard said on Twitter.

‘Due to the nature of chemicals onboard the container ship, applying water directly to the fire is not an option.’

The coast guard warned that there was an emergency zone around the ship, telling all vessels to stay at least two nautical miles away, and the Transport Ministry restricted all aircraft, including drones, from flying within two nautical miles or below 2,000 feet over the ship.

Radio communications indicate that the crew, including the captain, has been advised to abandon ship by Canadian authorities.

‘The advice is that you abandon, completely abandon, including all crew and captain,’ a Canadian Coast Guard official was heard broadcasting to the ship. 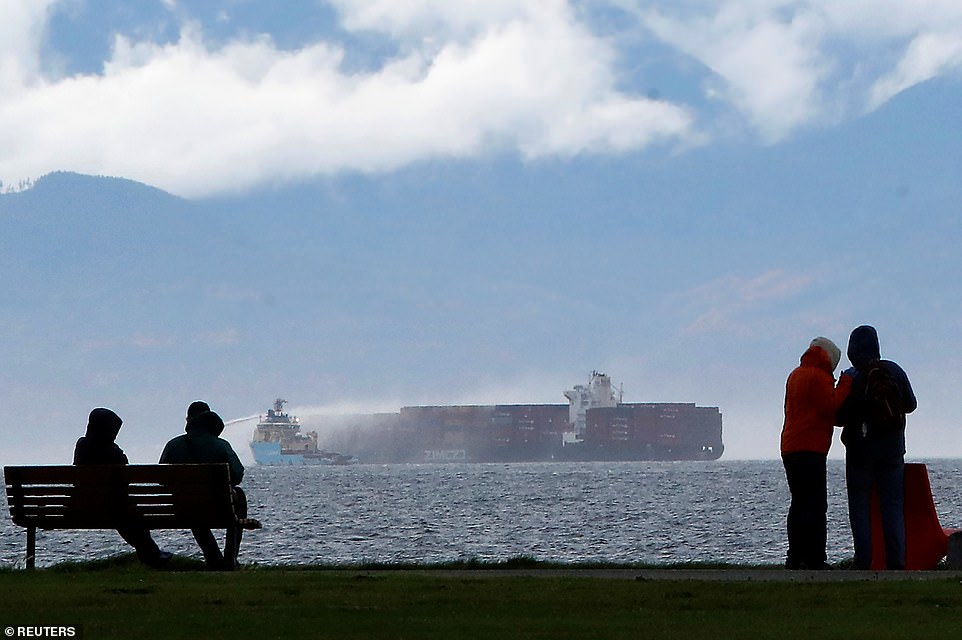 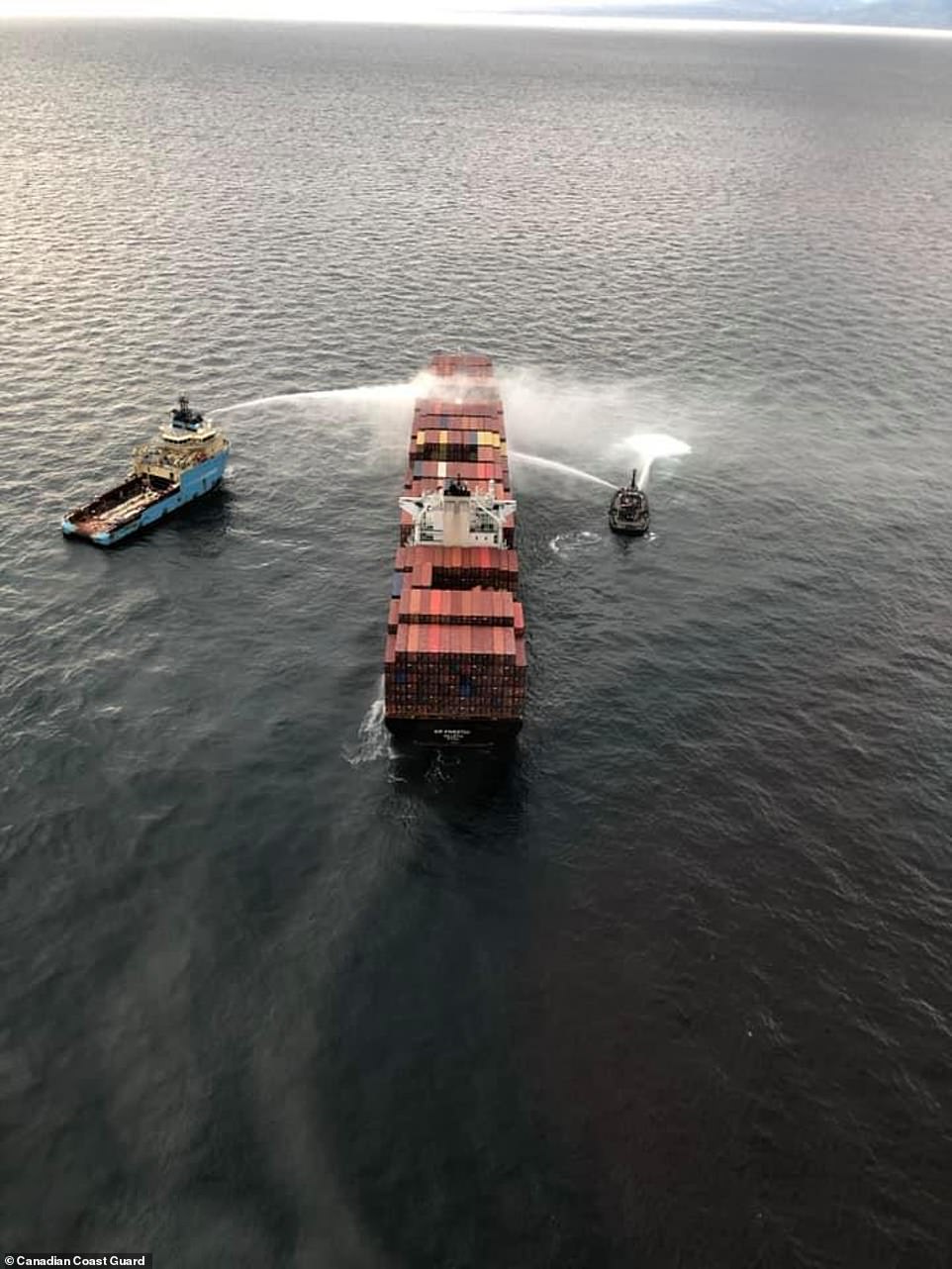 The fire ‘appears to have been contained,’ and a salvage and fire extinguishing agency was brought in to ensure the safe return of the vessel’s crew, Danaos said.

The mishap comes as more bad weather is expected to hit the area on Sunday and amid a global shipping traffic jam that has held up deliveries all over the world.

On Saturday, Canada’s coast guard said the ship itself was not on fire and only 10 containers were burning.

Canada’s coast guard said it has been working with its U.S. counterpart to track 40 containers that had previously fallen overboard when Zim Kingston encountered bad weather, saying they posed a significant risk to mariners.

‘Two of the containers have been identified as carrying spontaneous combustibles,’ Petty Officer 3rd Class Diolanda Caballero told the Vancouver Sun.  No further details on the exact contents have been shared.

‘They are currently drifting north but we can’t predict which way they will go because of the heavy weather. The bomb cyclone is around that area,’ she said.

The company did not immediately respond when asked if the lost containers were linked to the fire. 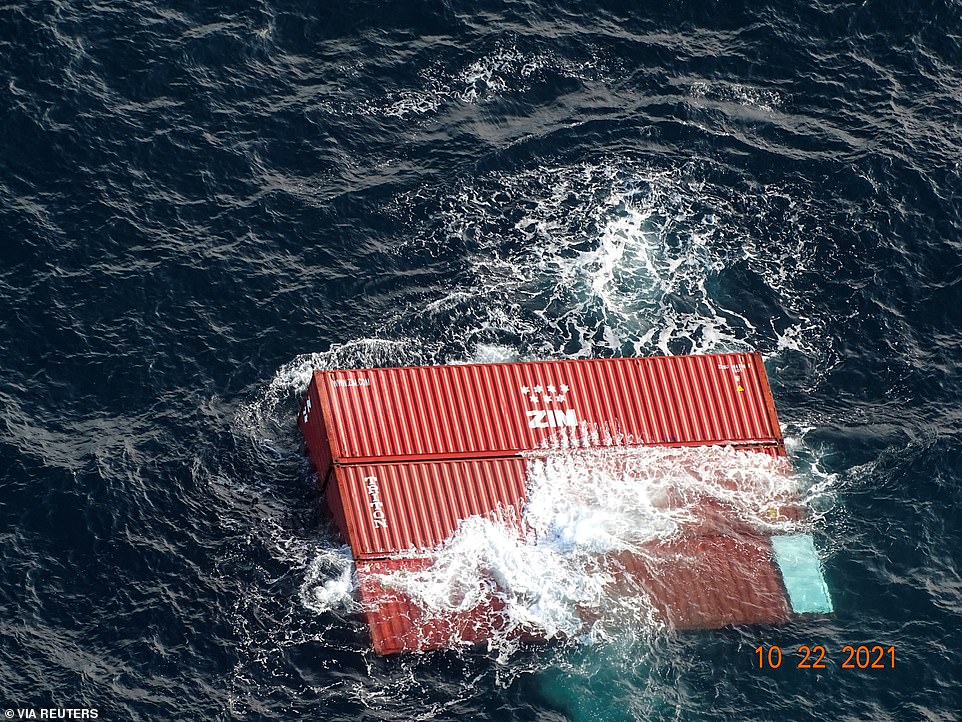 Containers which fell overboard from the ship Zim Kingston are seen floating west of the Straits of Juan de Fuca, off the west coast of British Columbia 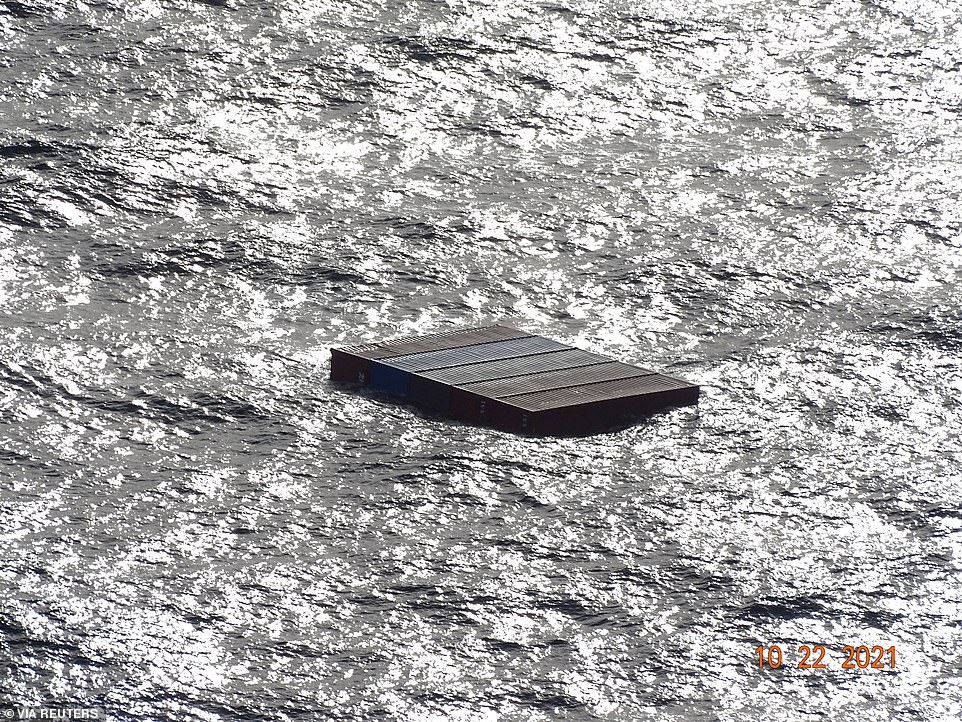 ‘Mariners are advised to stay clear of the area. Currently there is no safety risk to people on shore, however the situation will continue to be monitored,’ the coast guard said on Saturday, when video obtained by Reuters showed fire cascading down from the deck of the ship into the water.

‘This is extremely concerning. The ship and containers are very close to Victoria, BC, and a big storm is forecast to hit tonight, said David Boudinot, president of Surfrider Foundation Canada, an environmental organization.

‘We … are worried this may be yet another environmental disaster.’

The Zim Kingston is a Maltese-flagged containership built in 2008, with capacity for 4,253 twenty-foot containers.

It had departed from Busan, South Korea bound for North America.

The ship is now anchored in Constance Bank, in the Straits of Juan de Fuca off Victoria.

The containers on the ship were lost in rough seas due to a a strong low pressure system that was at hurricane force at times with seas up to 30 feet.

A storm is considered a bomb cyclone when its minimum air pressure drops 24 millibars or more within 24 hours, known as bombogenesis.

Between 2008 and 2016, an average of 568 containers were lost per year worldwide, according to a study commissioned by The World Shipping Council.

Ongoing supply chain issues have caused shortages of a wide range of goods, with shipyards backed up, and a shortage of truck drivers further exacerbating the problem.

Experts have warned Americans to plan ahead for Christmas – and prepare for gifts, decorations and food to still be in short supply anyway.