Seattle: Seattle police are investigating a shooting with "multiple victims" in a downtown neighbourhood and a suspect is at large. 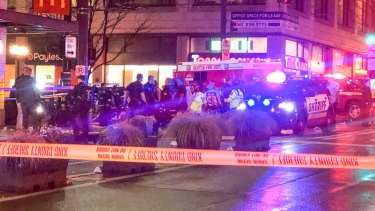 Police work the scene of a shooting on Third Avenue and Pine Street in Seattle. Credit:AP

The police department, which said on Twitter on Thursday that officers and medics were providing aid to victims at the scene, did not say if there had been any fatalities.

One person was killed and five people were critically wounded in the shooting near Third Avenue and Pine Street in downtown Seattle on Wednesday, according to Seattle Police Chief Carmen Best.

Police were asking people to stay out of the area after the shooting, which occurred shortly after 5pm.

The suspect fled the area and was still being sought as of about 6.15pm, Best said.

Detectives from the homicide and gang units were on scene, interviewing witness and obtaining video surveillance footage to develop a description of what is believed to be a lone male shooter, Best said.

Local KOMO-TV news reported that at least one person was slain in the gunfire and five others wounded, including a child. The station said that two suspects were being sought.

It was the third shooting downtown in less than two days. Earlier Wednesday, police shot and wounded a man in Belltown.

How a Penny May Be Keeping Walmart Stock From Sinking