A COVIDIOT passenger was kicked off a busy train for not wearing a facemask after a furious clash with cops.

The traveller was blasted as an “idiot” by disgusted commuters on a train to Surrey Quays, South East London. 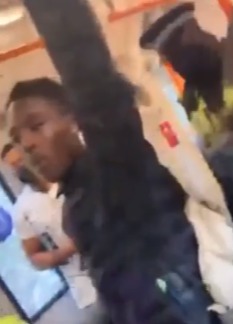 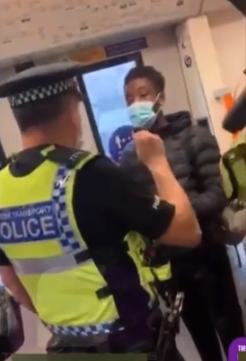 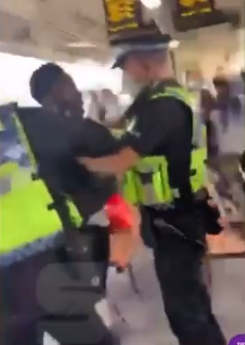 A video of the clash, filmed by other passengers, shows the man having a blazing row with a British Transport Police officer as he is ordered to wear a mask or get off the packed train.

Eventually another commuter gives him a spare covering to wear.

The cop then barks at the man: “Put it on. Keep it on. Stop giving me backchat and all of you spread out! You’re not meant to be in a group this big. Spread out.”

But the passenger hesitates to put the mask on, while the officer warns “Put it on now or you’re getting off!”

The passenger says to the cop that he’s wearing the mask but at no point does he attempt to put it on.

His friends repeatedly shout at him to put the mask on too and end the argument.

Eventually, the cop shouts: “Last warning!” leading to the passenger finally putting the mask on.

He then complains loudly: “I saw this man staring at us! This guy!” 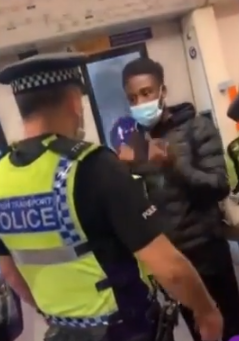 The policeman responds: “Yeah, because we have 45,000 people who have died of this disease, my friend.”

In another clip, the cop tells the passenger that the other commuters on the packed train think that he is being an “idiot” for not wearing a mask and arguing about it.

The passenger is then heard calling the cop a “p****hole”.

This enrages the police officer who forcibly pushes the passenger through the crowds of people and kicks him off the train.

The clip was posted on social media yesterday but has divided viewers.

One person wrote: “I hate to say it but policeman in the right.”

Another said: “Just wear a mask. Isn’t that hard”.

Whilst another person wrote: “If he put a mask on and was quiet that whole situation would have been resolved but he thought he was clever”.

However others believed that the policeman was in the wrong with one social media user explaining: “He [the passenger] ultimately put on a mask though after being provided one.

“The officer reacted to the comment and he escalated it by moving to him and taking him off the train. You can back chat the police, it’s not against the law.” 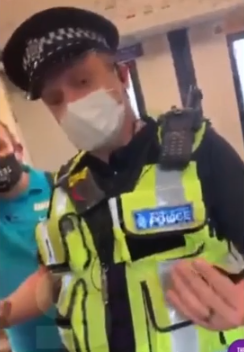