Sex attacker who raped and assaulted three victims in a Cornish seaside town -including girl, 16, celebrating her GCSE results and French tourist camping on beach – is warned he could face life in prison

An evil sex attacker has been warned he could face a life sentence in prison after being convicted of a catalogue of brutal sex offences against three victims last year.

Clinton Ferreira, 38, was this morning found guilty of sex assaults, rapes and attempted rapes committed against a local teenager celebrating exam results, a French tourist and a local woman over the course of three months last year.

It took the jury at Truro Crown Court just an hour to convict Ferreira, of Tregenna Place in St Ives, with false imprisonment, assault by penetration, two charges of attempting to choke/suffocate a victim with intent to commit rape, attempted rape, taking indecent photographs of a child, assault occasioning actual bodily harm and rape.

His case was adjourned to allow for a psychiatric report to be produced.

Judge Simon Carr ruled that the sentencing hearing will take place on November 27, adding that he was going to carefully consider whether or not he should impose a life sentence.

Opening the case last week, Jason Beal said: ‘This case is about a series of sexual assaults on young women in St Ives in late summer and autumn last year. The first victim was aged 16 and walking home after a night celebrating her GCSE results when she was attacked at Porthminster Beach in St Ives.

‘Three weeks later the second victim, a French woman on holiday with her boyfriend, was attacked in a tent pitched on the beach, yards from where the first victim was assaulted. 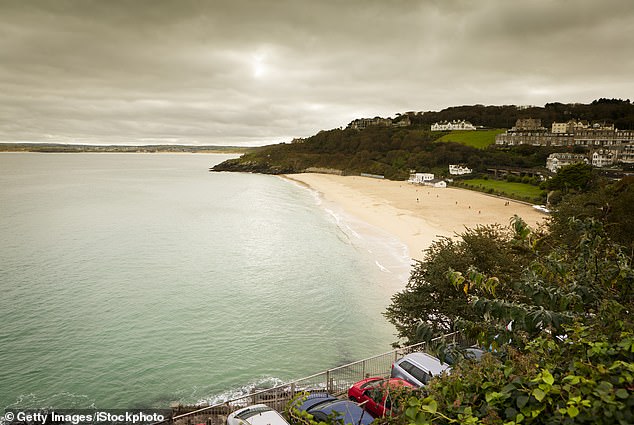 ‘Then, in late, October a local woman went to the shop to buy wine. She was very drunk. There she met a man who took her back to his flat and raped her.

‘Clinton Ferreira says he was not the man involved in the first two incidents. The third incident he agrees he had sex with the woman but says that she consented. The prosecution says she was too drunk to consent.’

Detailing the attack on the first victim, Mr Beal described how on August 22, 2019, she went out to celebrate her results.

The two had sex and then the boyfriend decided to go home so they went in different directions.

Mr Beal said: ‘The teenager was walking along the path alongside the beach when she heard someone running up behind her. 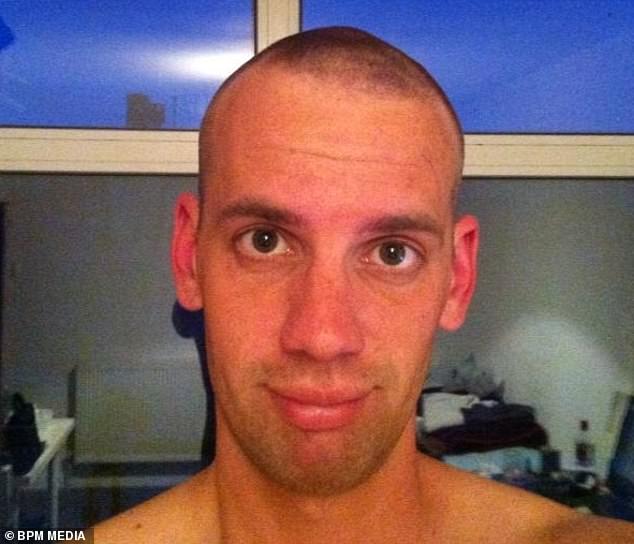 It took the jury at Truro Crown Court just an hour to convict Ferreira (pictured), of Tregenna Place in St Ives

She presumed it was her boyfriend until this person put his arm around her neck and pulled her towards the beach. ‘She tried to resist but realised this person was much stronger. She decided to pretend to pass out but this didn’t stop the man.’

Mr Beal then described how Ferreira threw her phone away and choked her so she couldn’t scream.

The choking was said to be so hard she thought her eyes were going to pop out and that she was going to die.

Ferreira then repeatedly performed oral sex on the victim and unsuccessfully tried to penetrate her. The abuse came to an end when he told her she was to walk towards the sea and not look back.

When she turned around after walking towards the sea the man had gone – the victim then went to a local hotel, hyperventilating and distressed, where she summoned help.

Although the area in question wasn’t covered by CCTV, a camera nearby picked up a man shortly after the time of the attack heading in direction of Tregenna Place.

Moving on to the second complainant, Mr Beal told the jury how she’d been in St Ives with her boyfriend and that night been out in pubs on the night of September 19. 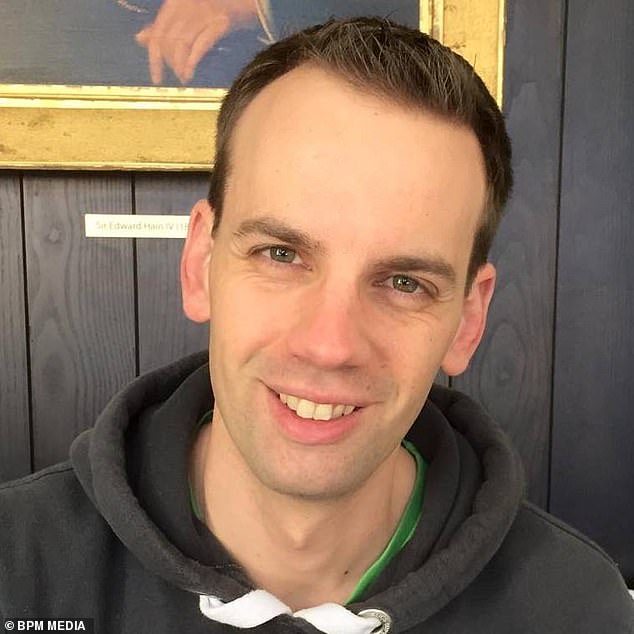 A French woman on holiday with her boyfriend, was attacked by Ferreira in a tent pitched on Porthminster Beach in St Ives

She decided to go back to their tent pitched on Porthminster Beach early, whereas he stayed out.

Mr Beal said: ‘She woke up during the course of the following morning with someone in the tent. She didn’t see his face but he had no top on.

‘She fell back to sleep and woke up a second time, struggling to breathe with a hand around her neck. She managed to crawl out of the tent and the attacker fled.’

The second complainant had a sore neck, blood on her lips and also suffered bleeding to her eyes consistent with being choked.

Again, CCTV pictured a man, Ferreira, in a black hoody, walking towards Porthminster before heading back the other way towards Tregenna Place shortly after the attack was said to have taken place.

The pattern of CCTV sightings was similar to those captured three weeks prior when the first victim was attacked. 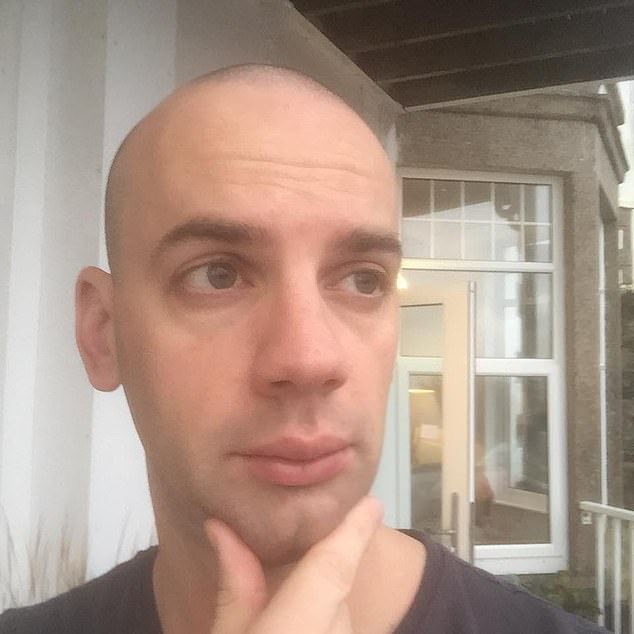 Ferreira was found to have an underwear set belonging to the second victim, which she says he took from her tent the night she was assaulted, and the hoody seen on CCTV

On December 12 Ferreira made a statement to police telling them he wasn’t the person responsible for the two attacks and that he hadn’t been out at the time.

He said he didn’t recognise the person in the CCTV or the black hoody worn by the individual in both clips.

He was arrested two days later and an examination of his phone showed photographs and a video shot on the night the first victim was attacked.

The video showed a close up of the genitals of a female kneeling on the sand and an individual performing a sex act on her.

Mr Beal pointed out that a tattoo that could be seen on the abuser was remarkably similar to one on Ferreira.

At Ferreira’s address police found a black hoody which was the one worn by the man seen on the CCTV footage and also an underwear set that the second victim says was hers and taken from the tent the night she was assaulted.

A match for Ferreira’s DNA was found on the first victim’s genitals and last week she picked him out from an identity parade.

Mr Beal said: ‘Following Clinton Ferreira’s arrest police were contacted by another woman in late December. She said that she thought she’d been sexually assaulted by the man on the evening of October 19.’

Mr Beal described how at about 10:30pm the drunk woman went to Co-Op where she was a regular customer. She could be seen propping herself up against a till and spilling crisps onto the floor before later falling back and hitting her head.

A man then entered the shop and reassured concerned shop workers that she’d get home safely.

All seemed well when he walked her off in the direction that staff knew to be where she lived.

Mr Beal said: ‘She remembering waking up in a flat naked, injured and believing she’d had sex due to the smell.

‘She doesn’t remember the sex but remembers a flaccid penis in her hand. When told a man had been charged with rape she used a search engine and recognised Clinton Ferreira as the man who’d had sex with her.’

In another recording on Ferreira’s phone there is a half-hour clip involving a woman matching the description of the complainant in which sex noises can be heard along with the sound of a woman saying ‘no’.

Ferreira’s phone was also registered as being in the area of Porthminster Beach at the time of the two attacks there. Ferreira will be sentenced on November 27.