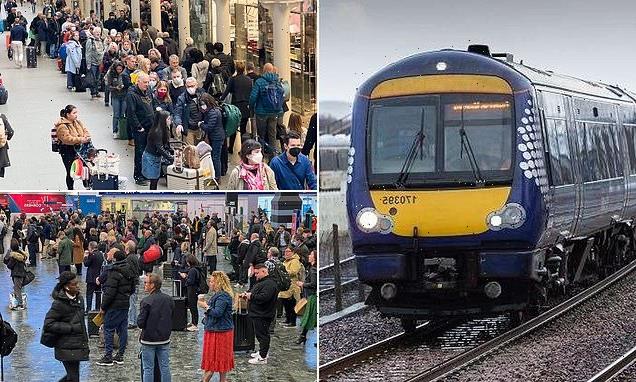 Train drivers in Scotland could strike for the first time in twenty years after rail union and transport bosses failed to agree a pay increase.

Aslef – Britain’s trade union for train drivers – met with ScotRail on Monday to discuss a pay increase amid rising inflation and the cost-of-living crisis.

ScotRail has offered drivers a 2.2% increase, which Aslef says is a ‘derisory offer’, while the train operator said it was a ‘very good offer that recognises the hard work of ScotRail staff and cost-of-living challenges faced by families across the country’.

ScotRail said it had been informed of the potential strike action after Aslef’s general secretary, Mick Whelan, recommended a formal dispute over pay.

It comes as Britons were warned to expect a summer of travel chaos after rail union RMT said it is planning ‘Extinction Rebellion style’ strike actions in June in a row over jobs and pay. 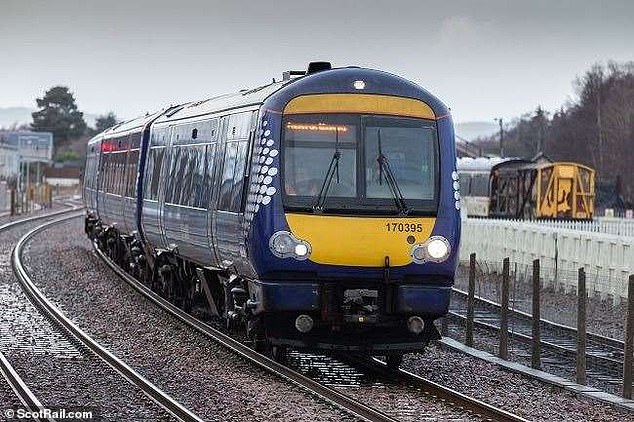 Train drivers in Scotland could strike for the first time in twenty years after rail union and transport bosses failed to agree a pay increase. Pictured: a stock image of a ScotRail train

Kevin Lindsay, industrial organiser for Aslef, said: ‘Aslef members who have kept the country moving throughout the pandemic have been presented with a derisory pay offer from ScotRail management which takes no account of the cost-of-living crisis workers face.

‘Scotland’s train drivers did not make the decision to consider industrial action lightly – indeed we have not had a single pay dispute with Scotland’s railway operators for 21 years.

‘Yet, just one month into the Scottish Government’s stewardship of ScotRail, we are being left with no option but to consider action in response.

‘ScotRail and the Scottish Government must recognise that these key workers deserve a decent pay rise, they should return to the negotiating table with a much fairer deal that recognises the vital work our members do.’

ScotRail negotiates on pay with two separate groups: Aslef on behalf of its drivers, and RMT, TSSA, Aslef and Unite on behalf of all other staff.

In October 2021, Aslef – who were representing engineering grade drivers at the time – TSSA, and Unite agreed to a two-year deal which saw a 2.5% pay increase backdated to April 2021 and a second pay increase of 2.2% which would be applied from April 1, 2022.

Today, ScotRail offered Aslef a 2.2 per cent increase in pay for its members, which it said was ‘consistent with the October 2021 agreement reached with other grades’.

The rail firm’s offer included ‘a top-up revenue sharing arrangement that could potentially raise the pay increase to more than 7 per cent’. This would apply where revenue targets are exceeded, ScotRail said. 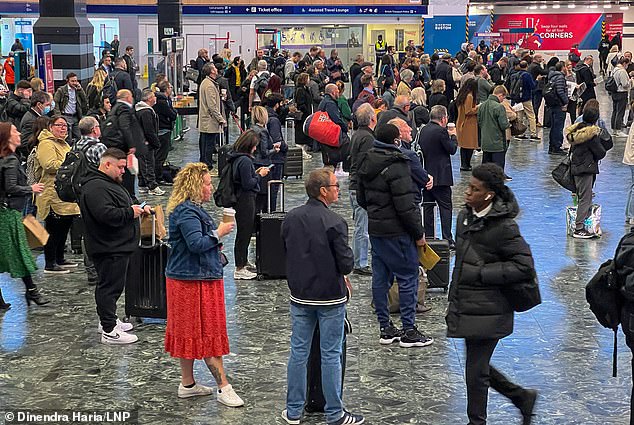 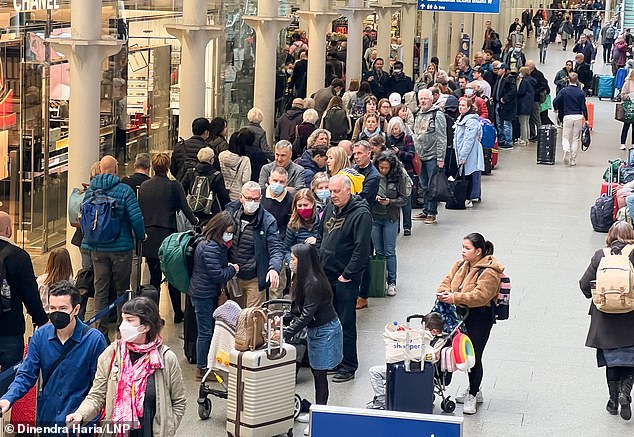 There were also long queues at St Pancras International ahead of the bank holiday weekend due to strike action, staff shortages and mass layoffs as a result of the Covid pandemic

Joanne Maguire, ScotRail chief operating officer, said: ‘It is very disappointing that we find ourselves at this stage with ASLEF, despite ongoing talks and a very good offer being made.

‘We have made a pay offer that recognises the hard work of our colleagues and the cost-of-living challenges faced by families across the country.’

According to ScotRail, passenger numbers remain around one third down compared to pre-pandemic levels, with passenger revenue around 25 per cent below 2019 figures.

Ms Maguire added: ‘We are still trying to recover from the pandemic. With customer numbers around one third below pre-COVID levels, it remains a very challenging time for Scotland’s Railway.

‘We have assured ASLEF and our workforce that we remain open and committed to further discussions in order to resolve the dispute and move forward together to provide the safest, greenest, and most reliable railway we can for Scotland.’

ScotRail workers – not including drivers – previously threatened to during Cop26, from November 1 to November 12, after RMT accused ScotRail of ‘failing to get serious’ in talks.

The action was called off just days before after RMT and ScotRail agreed to a 2.5 per cent pay increase backdated to April 2021 and a £300 payment to all staff who ensured Cop26 was fully supported.

Over the bank holiday weekend, passengers faced long delays due to strike action by members of the the Rail, Maritime and Transport (RMT) union and planned engineering works.

RMT also said it is considering bringing 15 train services across the country including Govia Thameslink Railway, Avanti West Coast, and West Midlands Trains to a grinding halt this summer.

The union has blamed Network Rail’s plan to cut at least 2,500 safety-critical maintenance jobs as part of a £2 billion reduction in spending on the network – changes that bosses say will lead to ‘trains flying off the tracks’.

RMT has also taken aim at train operators looking to freeze pay to combat the lowest passenger numbers in over 150 years.

The ballot of the 40,000 train workers opens on April 26 and closes on May 24 so strike action could begin in June.

Families and commuters could also be hit by huge disruptions on the London Underground and some airports as unionised workers at these services also consider strikes.

Industrial action in London on the Central and Victoria lines every Friday and Saturday is ongoing after the capital was nearly shut down in March by an ongoing row over pensions.

Meanwhile, the amount of bins not collected as a result of strike action in April and May is due to reach nearly 500,000, while Post Office workers have also said they are set for a walk out later this month.

Transport workers in London are to be balloted for industrial action in a dispute over pensions.

Members of Unite employed at Transport for London (TfL) and London Underground will vote in the coming weeks on whether to launch a campaign of industrial action.

The union said workers have been told that the value of their pensions will be cut and a final salary scheme will end following a central government-demanded review in return for pandemic-recovery funding.

Unite regional officer Simon McCartney said: ‘Our members are dedicated to keeping London moving. Now they are being told that they will be poorer in old age.

‘This is an appalling way to treat a loyal and committed workforce.

‘Workers are balloting for industrial action as a last resort. Despite repeated calls to management there have been no guarantees on pensions or job cuts.

‘Strike action would inevitably cause severe disruption to public transport throughout London.’

Unite’s members at TfL are spread across different parts of the organisation including Dial-a Ride, London Underground and Croydon trams.

The union said its members are also in dispute over pay and the threat of job losses.

The ballot will close on 26 May. If members vote in favour of industrial action, strikes could begin by mid-June, although Unite said action is likely to be co-ordinated with other unions who also have members in TfL.