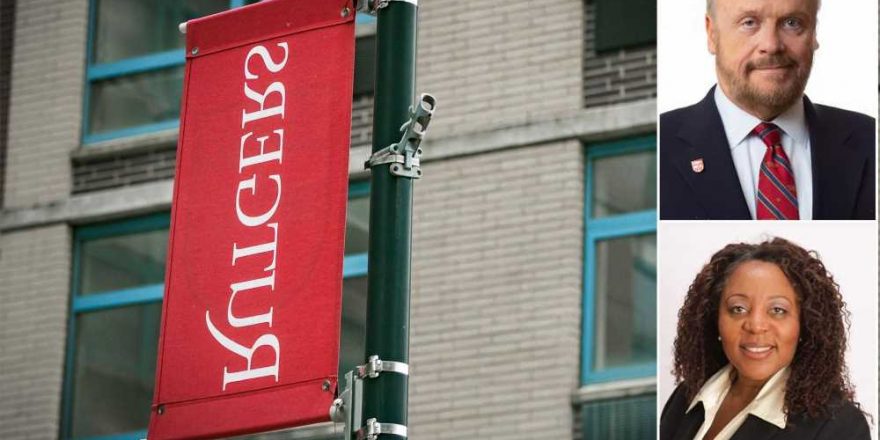 The chancellor and provost of Rutgers University apologized Thursday for issuing a statement that denounced the recent surge in anti-Semitic attacks because he said it “failed to communicate support for our Palestinian community members.”

The initial statement from Chancellor Christopher Molloy and Provost Francine Conway Wednesday said they were “saddened by and greatly concerned about the sharp rise in hostile sentiments and anti-Semitic violence in the United States.”

The Thursday statement, titled “An Apology,” included the message that “our diversity must be supported by equity, inclusion, antiracism, and the condemnation of all forms of bigotry and hatred, including anti-Semitism and Islamophobia.

“As we grow in our personal and institutional understanding, we will take the lesson learned here to heart, and pledge our commitment to doing better,” Molloy and Conway continued. “We will work to regain your trust, and make sure that our communications going forward are much more sensitive and balanced.”

Earlier Thursday, the Rutgers chapter of Students for Justice in Palestine issued a lengthy denunciation of Molloy and Conway’s initial statement.

The group said the statement “cannot be separated from widespread attempts to conflict antizionism [sic] with antisemitism [sic] and derail Palestinian voices and activism … it isolates them and shows that Rutgers does not stand with or support them in their struggle for freedom and liberation, and contributes to the racism efforts of zionists [sic] to erase Palestinian identity.”

A second statement from Students for Justice in Palestine posted Friday similarly panned Molloy and Conway’s “apology,” saying it “persists on the nonnecessity
of actually supporting Palestinian students, faculty and allies as we grieve, organize, and resist the Zionist occupation of Palestine. Our existence is not contingent on the University’s acknowledgment, and the empty assertion that our community is ‘supported’ may remain with the University, as it is an assertion that has not been backed by any tangible efforts.”

The original statement had referenced the murder of George Floyd by Minneapolis police officer Derek Chauvin, the recent conflict between Israel and Hamas, attacks on Asian Americans and “targeted oppression and other assaults against Hindus and Muslims.”

“This recent resurgence of anti-Semitism demands that we again call out and denounce acts of hate and prejudice against members of the Jewish community and any other targeted and oppressed groups on our campus and in our community,” Molloy and Conway wrote.

“Although we face many challenges and may have differing perspectives,” the statement concluded, “we must condemn acts of violence and all forms of bigotry.”

Jewish and pro-Israel commentators blasted the university over the second statement, with Washington Examiner executive editor Seth Mandel calling it “infuriating beyond belief.”

“[Rutgers] has done plenty to make alumni like myself cringe over the years,” Mandel tweeted, “but this bald erasure of the humanity of the Jewish people will forever stain Molloy, the university and all of us with any association with the school.”

The Dispatch senior editor David French knocked the original university message as “an anodyne ‘all lives matter’ statement … Yet even that was unacceptable? Pathetic.”

“Under pressure, the Rutgers chancellor *apologized* for condemning the surge of anti-Semitic violence,” Sen. Tom Cotton (R-Ark.) noted on Twitter. “How can someone this weak lead a university?”

A Rutgers spokesman told The Post on Friday that the university “has no further comment at this time.”

Representatives of Rutgers Hillel or Rutgers Chabad did not immediately respond to requests for comment Friday night.