A 96-year-old driver and his 90-year-old wife spent 15 hours driving around after getting lost while making a 20 mile journey.

When police spotted their car travelling along a dual carriageway at 4.40am doing 25mph, they thought they’d come across a drink driver.

However the couple explained they’d simply been trying to drive to a local caravan dealership, a journey they began at 2pm the previous day.

After taking a wrong turn they then drove all night trying to find their way home to Knaresborough, North Yorkshire.

Police warned the driver it might be time to take a well earned retirement from getting behind the wheel of his car. 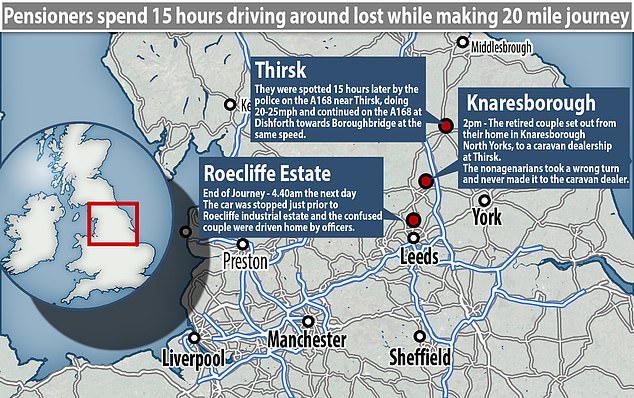 A spokesman for North Yorkshire Road Policing Unit explained how they discovered the pair in the early hours of yesterday.

He said: ‘Early this morning, officers attended a report of possible drink driver on the A168 near Thirsk, they were all over road doing 20-25mph.

‘The car continued on the A168 at Dishforth towards Boroughbridge still doing 20-25mph.

‘After stopping for a junction at Norton Le Clay as though checking directions signs and a little bit of grass verge driving, the concerned officers caught up.

‘The car was stopped just prior to Roecliffe industrial estate roundabout after what could have turned into the world’s slowest pursuit.

‘The 96-year-old river and his 90-year-old partner were both as equally lost and confused trying to get home to Knaresborough. This was now 04:40am.

‘They had set off from Knaresborough at 14:00 yesterday (SUNDAY) to go to a caravan dealer at Thirsk, a place they have been many times before and got lost.

‘They never did get there due to getting lost. We confirmed they hadn’t been to visit anyone or go anywhere else, not out for tea

-they’d just been trying to get home but were lost and confused nearly 15 hours after setting off.

‘Obviously we took them home. We submitted forms to DVLA over medical concerns we have over the driver and very strongly advised him to stop driving for his and everyone else’s safety.

!’It’s a difficult conversation to have, but be honest with your relatives and friends you have medical concerns over. Tell them to stop and report them to DVLA.

‘This driver was nearly 15 hours into a 40 min journey, the ending could have been much worse.’