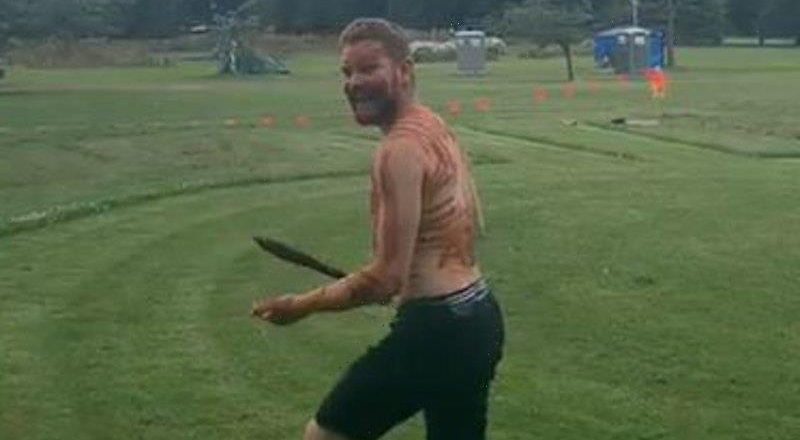 First Nations elders and traditional owners have insisted that prominent Aboriginal members of the “freedom” protest attempting to hijack the Aboriginal Tent Embassy protest in Canberra do not represent the communities they claim to stand for.

In videos posted to social media, leading members of the conspiracy theory-driven Original Sovereigns claim to possess a declaration signed by 40 “tribal nations”, written with a soldering iron on the underside of a kangaroo pelt. 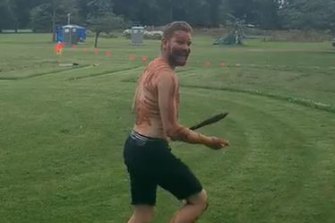 Dancing: a member of the conspiracy-minded group that has camped near the Aboriginal Tent Embassy in Canberra.Credit:Instagram

But elders, traditional owners and families say Indigenous members of this group are bringing shame on their communities.

The push-back comes as police clashed with “sovereign citizen” protesters outside Parliament House in Canberra, with police using pepper spray to bring the violent confrontation under control. Footage live-streamed on Facebook showed a line of police outside the doors of the Parliament building, which is behind the Old Parliament House.

One man could be seen talking closely to police before an officer burst out of the line to grab him. As other protesters swarmed around them, police used pepper spray to break up the crowd. Two other men and a woman were also arrested during the stand-off at Parliament House on Thursday, charged with breach of the peace. 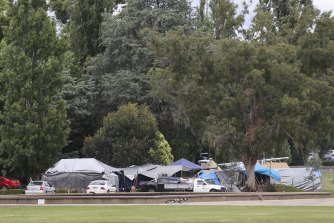 The camp of the “Original Sovereigns” near Old Parliament House on Thursday.Credit:Alex Ellinghausen

Members of the radical Original Sovereigns group have tried to take over the 50-year-old, heritage-listed Aboriginal Tent Embassy, and this week reiterated their intention to take Old Parliament House on Saturday, by force if necessary.

The group believes the seat of power in Australia remains located in the lower chamber of Old Parliament House and some group leaders stated they were prepared to “go to war” and sacrifice their lives for the cause.

However, in a public post on Facebook on Wednesday, the Jarrett family and elders from the Gumbaynggirr family condemned what they described as the “appalling actions” of their family member Richie Jarrett, who also goes by the name Bumagin.

“Richie does not represent our family. He holds no cultural mandate. He is proclaiming himself to be a cultural ‘lore man’ and it is very hurtful to see him try and use our culture this way,” the statement read. 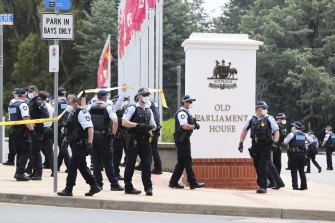 Police at Old Parliament House on Thursday. Conspiracy theorists have said they will try to take it over on Saturday.Credit:Alex Ellinghausen

The Murrawarri nation, the first nation in Australia to declare its independence from the Crown in 2013, said it supported the Aboriginal Tent Embassy for its 50th anniversary and condemned the protest group.

“We are disturbed that some of our citizens who are a part of this group have been involved in the threatening and abuse of traditional owners of the Ngunnawal nation that has been aired on social media and do not support these actions in any way.”

In other First Nations Facebook groups, community members have pleaded with individuals to dissociate themselves from the Original Sovereigns camp and return home to sit with elders. Their requests have largely been rejected, with the individuals instead committing to remain at the camp.

The new protest group consists of a coalition of interconnected groups involved in the “freedom” movement. Some Indigenous individuals who believe in the Freemen on the Land anti-government ideology front the group, which is also associated with the Original Sovereign Tribal Federation, an offshoot of the sovereign citizen movement. 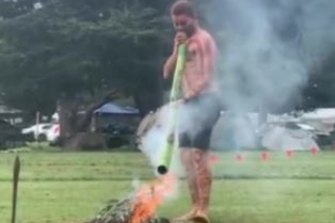 A Muckudda camp member at the camp. Credit:Instagram

The new camp has labelled itself Muckudda Camp, referring, according to one leader, Bruce Shillingsworth, to “storm coming” — an apparent reference to the QAnon conspiracy.

Over the past fortnight, allegations of verbal and physical abuse have also been levelled against members of Muckudda Camp. In a public post to Instagram, Ngunnawal traditional owner Leah House alleges camp members had threatened female traditional owners and embassy council members.

”It was intimidating as a young woman to have six men confront me. They scared me the way they threatened to ‘take me’ and to deal with us in ‘tribal ways’,” Ms House – a domestic violence survivor – told The Age and The Sydney Morning Herald this week.

Other Ngunnawal traditional owners, alongside senior figures in the history of the Tent Embassy, have also repeatedly asked the newcomers to leave and publicly condemned the camp’s Indigenous ringleaders for not observing cultural protocols and respectfully seeking permission to conduct ceremony and protest on their lands.

ACT Police has been targeting Camp Muckudda members with alcohol and drug testing on roads surrounding the site, and the National Capital Authority issued orders for the removal of semi-permanent structures erected in the past week.

The attention prompted Bundjalung man Luke Simpson to issue warnings and advice to group members “to not comply” with police and instead call camp leaders. 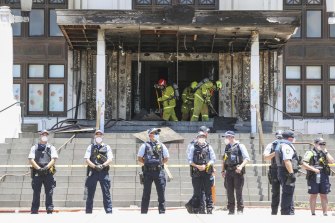 Firefighters responding at the fire-damaged front entrance of Old Parliament House following a protest, in Canberra on December 30.Credit:Alex Ellinghausen

“We’ll deal with it,” wrote Mr Simpson. “We know your stunts [AFP]. Stop protecting the paedophile and bring him down to speak to us”.

Prominent members of the group have said they would remain in place “until the job is done” – a response to previous comments made by ACT Chief Police Officer Neil Gaughan that he wanted the protesters to have left the Tent Embassy by January 24, the eve of the Tent Embassy’s jubilee celebrations.

“On Saturday I’ll be there, man. I’ll be in the front line. If things are going to be sour, then I’m going to get smashed first … I’m ready to take it if it comes,” said Mr Simpson.

In the same video, Muruwari and Budjiti man “Buddy” Shillingsworth said protesters had nothing to lose in their attempt to “go through the doors” on Saturday.

“You’re saying we don’t know whether the people [are] going to get shot or not when they walk through the door?

Mr Shillingsworth was arrested and charged after the clash on Thursday.

Earlier in the video, another group member Doris Duriye Osman says: “Yeah, I often say to people … I’m willing to die for this if I have to. Because to me, if I don’t have my freedom, then life isn’t worth living, being enslaved like this. So, I’m going all the way. And that’s just how I feel.”

Australia’s largest anti-vaccine lobby group, and backer of Craig Kelly and Clive Palmer’s United Australia Party, Reignite Democracy Australia is also courting the group in Canberra. In a live-streamed “influencers” Zoom call this week, a woman who identified herself as working on behalf of the organisation’s founder, Monica Smit, asked the group in Canberra to join an “international committee” being organised by Smit and US-based conspiracy theorist Robert F. Kennedy, Jr.

“We have been talking to many different countries about how we form a committee with monetary law, tribal, everything across the board, obviously, to stop the young children being vaccinated, but we are looking for someone from your tribe,” the woman says, “because obviously, Monica has quite a lot of pull overseas.”