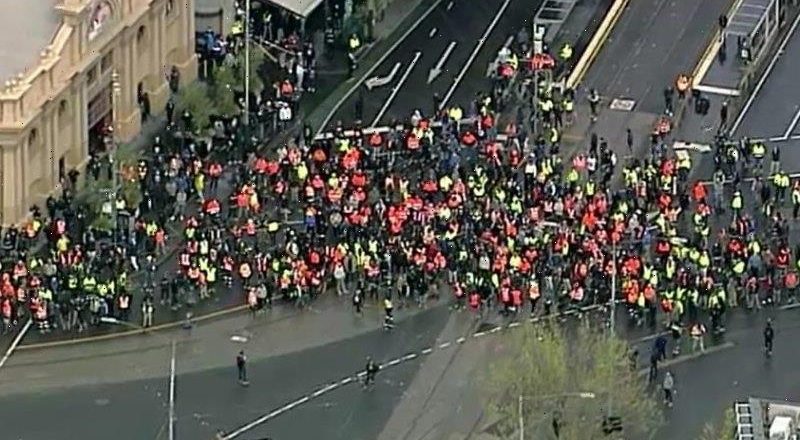 Media will have to delay publishing helicopter footage of protests on Melbourne streets and organisations must apply for approval from police to fly, under tight new rules that temporarily restrict the city’s airspace.

Victoria Police on Wednesday banned aircraft from flying above the inner city to a height of 2500 feet (762 metres) without their approval as anti-lockdown protesters clashed with officers for the third day. It meant news helicopters could not capture footage. 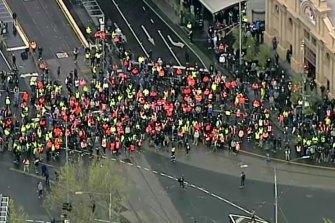 Stills from helicopter footage of the protest on Tuesday outside the CFMEU headquarters in Melbourne.Credit:Nine

However, after concerns were raised by media organisations that the introduction of the no-fly zone was an overreach, Victoria Police said it would include a provision for media outlets to operate their aircraft over the CBD.

“As part of the conditions, pilots will need to obtain approval from Victoria Police air wing before taking off, to ensure there are no safety risks,” a spokeswoman said.

“Media outlets will also be required to delay publishing any live-stream footage from the air by 60 minutes or at the conclusion of the operation. This is because protesters were actively monitoring aerial live streams, compromising the police operation and putting the safety of members at risk.”

The restrictions from the Civil Aviation Safety Authority, made at the request of Victoria Police, are effective until Sunday. The decision to implement a no-fly zone was made as up to 1000 anti-lockdown and anti-vaccine mandate protesters gathered in the city and made their way to Melbourne’s Shrine of Remembrance on Wednesday.

Riot police surrounded protesters at the Shrine but kept their distance in a stand-off that lasted for a few hours before police began to make arrests and cleared the area.

The change in approach by police came after concerns were raised by the media.

Darren Wick, the national director of news and current affairs at Nine – owner of The Age – told radio station 3AW on Wednesday afternoon the no-fly zone decision was made by CASA but the request had come from police.

“[Victoria Police] want our chopper footage stopped for operational reasons because they’re concerned that the protesters are going to use the live feeds to give updates on the locations of the police. We find that pretty ridiculous,” he said.

A helicopter is contracted by Nine, Seven and the ABC, which Mr Wick described as “the three most reputable sources of news in this country”.

“We know what we’re doing, we’re not here to scaremonger or do anything ridiculous, but the concern for us about this decision was it was made without consultation. In the past, if police sought our assistance, during a siege or during bushfires in terms of excluding chopper vision, we’ve always talked it through with them, we’ve always come up with a sensible decision and we support them.

“We’re not a police state, it’s very unprecedented, and it’s very uncomfortable the decision that’s been made.”

Mr Wick said he didn’t like what the protesters were doing but to ban helicopter coverage was an overreach and set a very dangerous precedent, which moved into the realms of censorship and a police state.

“We need to cover [the protests]. We live in an open, free society, we’re a democracy. We allow these basic freedoms to disappear now, what comes next?”

It was the third day of protests in Melbourne, which began with a demonstration on Monday to oppose an order from the Chief Health Officer that construction workers must receive a vaccine to work.