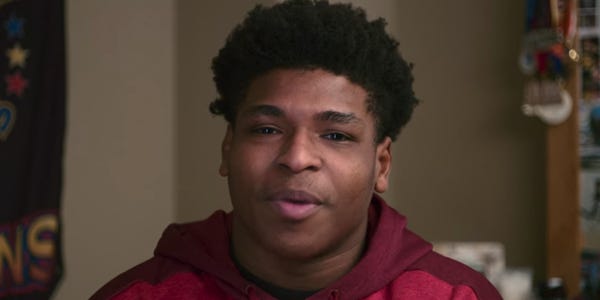 Federal prosecutors alleged that "Cheer" star Jerry Harris "exploited and violated" at least five to 10 minors and sexually assaulted a 15-year-old boy, according to new court documents from the U.S Attorney's Office.

Harris' lawyers and federal prosecutors appeared in a court hearing Wednesday where they argued for and against his release.

This week, the prosecution filed a motion to keep Harris jailed until his case goes to trial, and the documents detailed the sexual assault allegations against the 21-year old, who was arrested and charged last month with producing child pornography and has remained in lock up for nearly a month. Federal prosecutors alleged that Harris reached out to young boys online to coerce them to "engage in sexually explicit activity."

"Harris, by his own admission, has victimized at least 5 to 10 children who are all forever damaged by his criminal conduct," the documents, from U.S. Attorney John Lausch, read. "Harris must not be allowed to harm another child and he should be detained pending trial as he is a clear and present danger to the community, most notably defenseless children."

The U.S. Attorney's Office accused Harris of sexually assaulting a 15-year-old after Harris "followed him into the bathroom and sodomized the boy," though it was unclear whether that alleged victim was among the group that prosecutors said Harris admitted to abusing.

Harris' lawyers filed court documents Wednesday asking that he be released as he awaits trial, saying the "nature and circumstances of the offense" is not "persuasive enough to merit" his detention.

"It is important to recognize, however, that Mr. Harris had barely reached the age of majority when the purported criminal conduct occurred," said Harris' lawyer Todd S. Pugh .

In his motion for release, Pugh also asked the court to consider the "weight of the evidence" against his client and his "history and characteristics," emphasizing Harris' need for mental health treatment for past experiences, according to court documents.

Pugh's motion noted that Harris lost his single mother to lung cancer, found himself homeless after the motel he was living at with his family closed down, and was "relentlessly ridiculed, mocked, and bullied" in high school.

Harris' defense outlined conditions for his release, using Harris' town home that he owns as collateral and saying that Harris' guardian and other parents from the "cheer community" are willing to serve as "third-party custodians" upon his release.

Justice Heather McShane, the federal judge in Chicago presiding over Harris' case, declined Wednesday to issue a ruling on whether to keep him in jail or to issue bail.