A primary school headmaster has become the first in the country to make children wear face masks when they start the new term next month – and has warned coverings won’t be enough.

All pupils above the age of five will be forced to cover their faces, according to the edict sent out by Warren Harrison, chief executive officer of the Premier Academy’s Eaton Mill Primary School.

In a newsletter sent to parents on Monday, Mr Harrison slammed the government for ‘doing everything on the hoof’ and said the Premier Academy was acting with ‘common sense, logic and reason’ in the face of coronavirus.

All children in year one upwards who return to the school, in Bletchley, near Milton Keynes, Buckinghamshire, on September 8 will have to wear masks or visors.

But the plan goes against government guidelines which state children under the age of 11 do not have to wear masks.

The newsletter – which was signed off with ‘Stay safe, mask up and stay classy’, states: ‘All staff, children, parents, carers and visitors must don a mask when on site or they will not be allowed access.

‘Face coverings are not acceptable. We recommend the N95 or surgical masks. 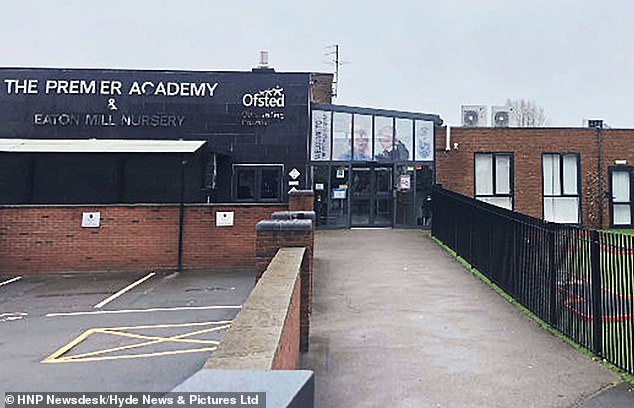 ‘Once in their bubbles, children and those members of staff in close contact with children will change from a mask to a named shield which will be supplied by the school. Anyone may however stay in a mask if they prefer.

‘Reception aged children will not be mandated to wear a mask or face shield, however we would encourage you to encourage them to do so at the current time.

‘When moving around the school, masks or shields must be worn – e.g visiting the toilets.

‘When not in the classroom, masks may be removed for eating purposes and when outside the building during the bubble’s daily walks. All cross bubble contact between children and staff and staff and staff will need all parties to don a mask.

‘At dismissal time all shields should be left on desks with water bottles so that they can be cleaned efficiently.

‘Children will be dismissed in masks to adults wearing masks.’

It went on to ask pupils and staff to try and maintain two metre distance and said face shields would be provided by the school.

It went on: ‘Make sure that your child understands why they are wearing a mask.

‘Teach them how to apply it and remove it and slip their arm through it up to their bicep for when they go to the dining hall or their daily walks. 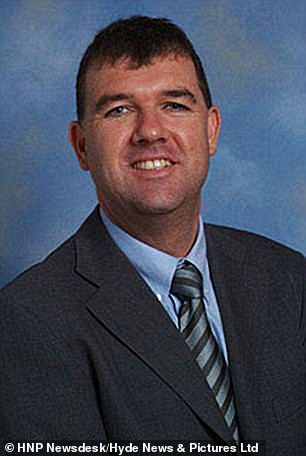 ‘It would also be useful if they could practise wearing a shield over their face for a while at home to get them used to this too.

‘Please note that the following steps are precautionary measures designed to protect everyone from C-19 and especially the more vulnerable members of staff. These measures will be reviewed monthly however we expect more schools to follow suit.’

The school is also cancelling breakfast and after school clubs.

And Mr Harrison went on to criticise the way the government had handled its response to the pandemic.

He said: ‘If it goes well, you never know, it may catch on.

‘From what we have witnessed so far, doing everything on the hoof doesn’t really pay dividends.

‘Especially given the fact that government is now scapegoating Public Health England which will be disbanded by Hancock who actually has direct control of PHE and is the same man who told NHS workers back in April that wearing masks made no difference.

‘If this sounds too far fetched then please avoid talking to 18-year-olds about their exam results.

‘Yesterday students protesting in London were demanding that the Prime Minister came out of hiding. Today a national newspaper has reported that he has gone on another holiday.

‘Maybe he is thinking that if things don’t improve, he can replace Dion Dublin on A Place In The Sun. Who knows?

‘The WHO has said from the outset that we need to test, test, test and this would seem like the obvious way forward which would solve many of the issues and help reduce anxiety.

‘If we could we would like to randomly test children and staff on a weekly basis and we do not understand why this is such a difficult strategy for the government to deliver on unless of course it knows something that we don’t.

‘Just like a vesper martini it would shake things up without stirring things up especially today which is so far the day when the highest number of C-19 cases have been confirmed globally.’

Mr Harrison’s letter is titled ‘The World Has Changed And So Have We’ and also makes puns about Bond movies.

It states: ‘Although this may sound like the title of the next Bond Movie, it is not. I do appreciate that it could have felt like the sky was falling in recently but tomorrow never dies and we have to look to the future.

‘The quantum of solace that we have all faced recently seemed to be coming to an end until today when MK Council leader Pete Marland said that MK may soon need to go into lockdown!

‘As it stands we are still planning to open on 8 September and to have all children back on site by the end of that week. There is no way of working Moonraker into this paragraph, however if the next Bond movie is set in SW1, I expect the title to be From Punch And Judy With Love!

It comes after he wrote a message to parents several weeks back, saying: ‘None of us can afford to be complacent.

‘And if you are not taking Covid-19 seriously then we need to find you a school which better matches your view of the world. Maybe try Hogwarts.’

Mr Harrison is known for not holding back with his views.

In 2017 he hit out at then PM Theresa May’s £995 leather trousers, telling her the pricey brown item didn’t match her black jumper.

However at the time the comments led to raised eyebrows as his own salary was actually thought to be higher than hers at between £140,000 and £150,000 a year.

Some parents at the Ofted Outstanding-rated Premier Academy are not happy at all about the mask ruling.

One parent told the MK Citizen: ‘I believe this makes them the first primary school in England to do this, and it is contrary to government guidance.

‘We have applied to move our child due to this and their decision to cancel breakfast and after school clubs, which makes it impossible for us to get them to school.’

But others welcome it.

One said: ‘It sounds extreme, but at least I know my child is protected. It will be very difficult to persuade a five-year-old to wear a mask or shield all day though.’