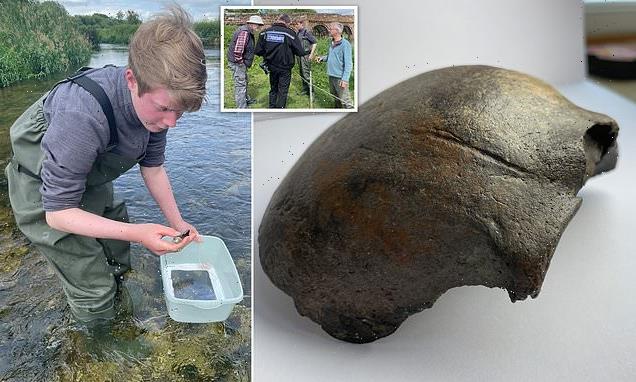 Police called when boy finds skull, only to learn it's 1,400 years old

Numbskulls! Police send in crime scene investigators when teenage treasure hunter finds human skull in river – only to learn it was 1,400 years old

Police sent crime scene investigators to a river in Dorset after a teenage treasure hunter found a human skull – only to then learn it is 1,400 years old.

Tom Read, 15, made the discovery while wading through the River Stour in the rural village of Sturminster Marshall in June.

He initially thought he had simply retrieved a boot, before closer inspection showed it was actually a human frontal bone skull fragment.

He told his shocked mother of the grim find, who in turn alerted the county coroner.

Crime scene investigators attended the scene and searched the river, but expert analysis through carbon dating has now concluded that the skull dates back to the early Anglo-Saxon period between 450-600AD.

The skull was subsequently listed as ‘of antiquity’ by police and will not be subject to a criminal investigation.

It is now set to be documented and could be put on display at the Dorset County Museum in Dorchester. 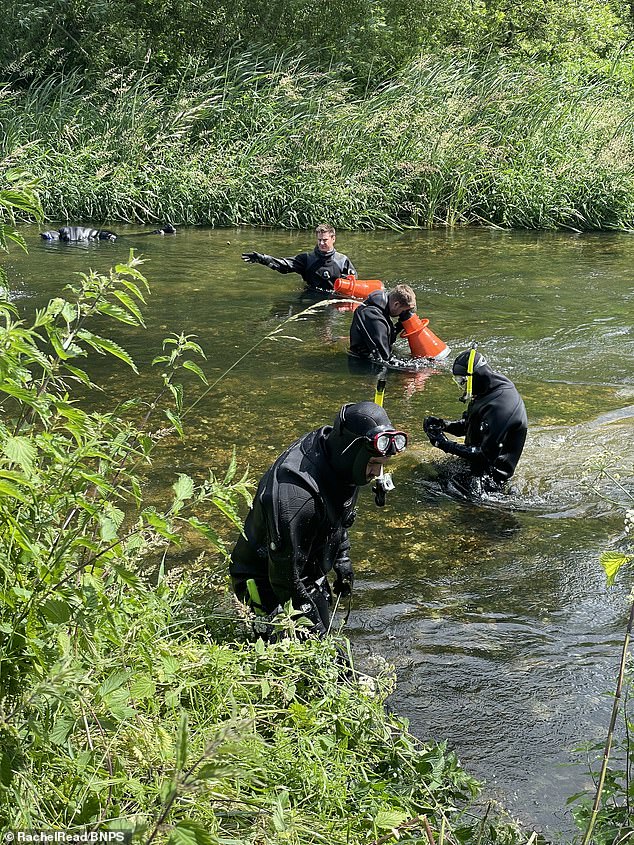 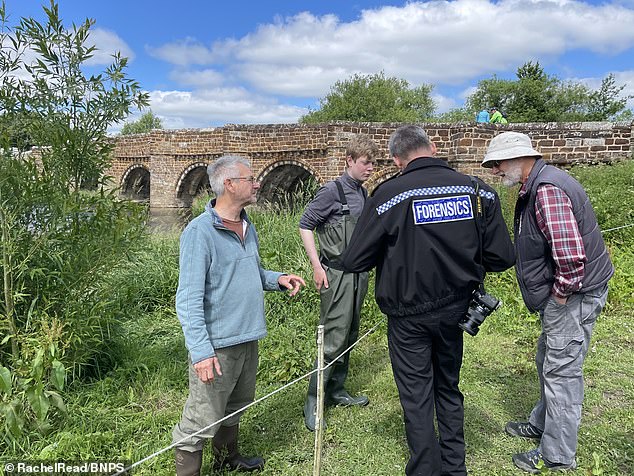 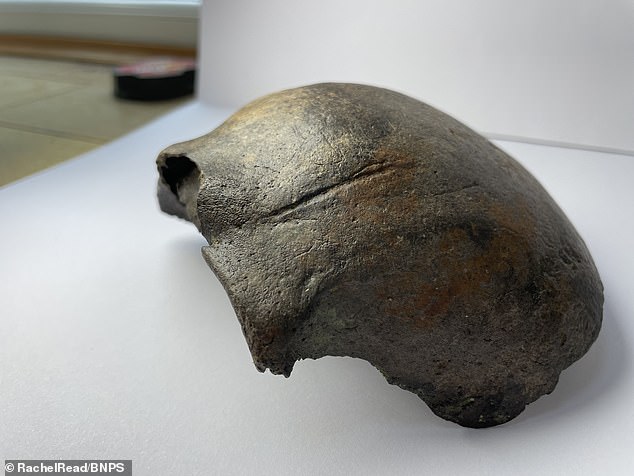 The 1,400-year-old skull (pictured) is now set to be documented and could be put on display at the Dorset County Museum in Dorchester 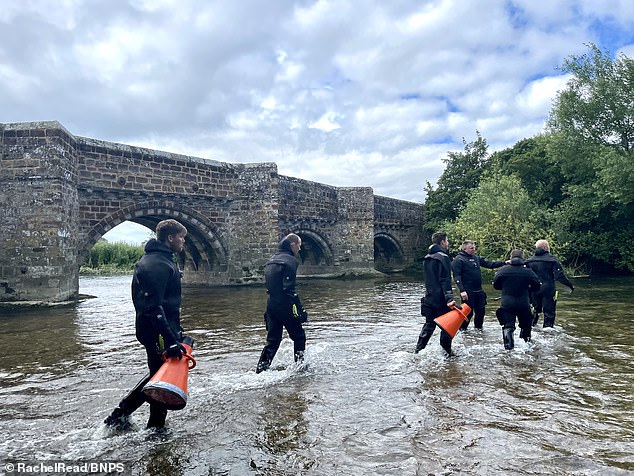 Tom has previously found old coins and antique pottery, which he documents on his Instagram page Tom Finds, which has more than 2,000 followers.

He said: ‘I found a human frontal bone skull fragment on my first river wading trip.

‘After lots of processes including searching for more bones with police divers a couple of weeks after I made the initial discovery, the skull fragment was finally sent off for carbon dating.

‘A couple of days ago we received the report and conclusion from the dating, and it’s very exciting.’

His mother, Rachel Read, added: ‘He’s always been a bit of a treasure seeker, he’s done a lot of metal detecting and mud larking and is always finding things.

‘He was given a pair of river waders a few days before for his birthday and it was his first trip out in them finding a few things – including a human skull.

‘We brought it home and thought what on earth had we done because it’s not necessarily something you want to have in your possession so we contacted the county coroner. 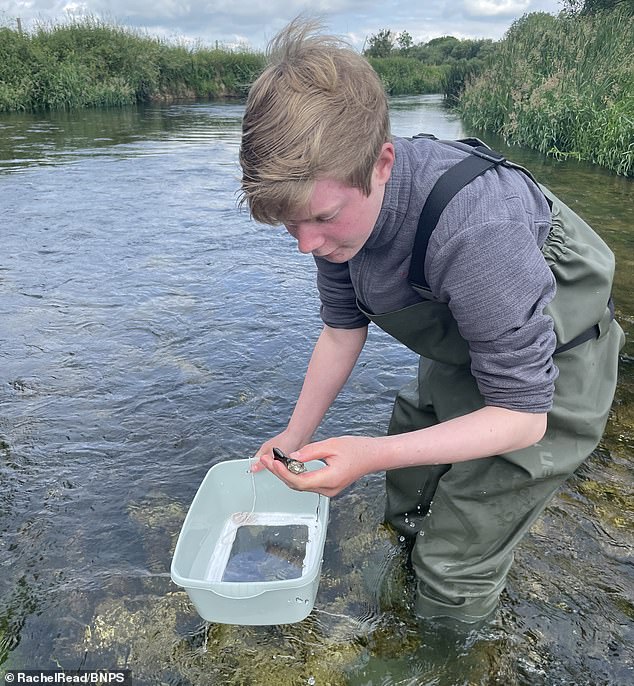 Tom Read, who has more than 2,000 followers on social media, has ‘always been a bit of a treasure seeker’, according to his mother 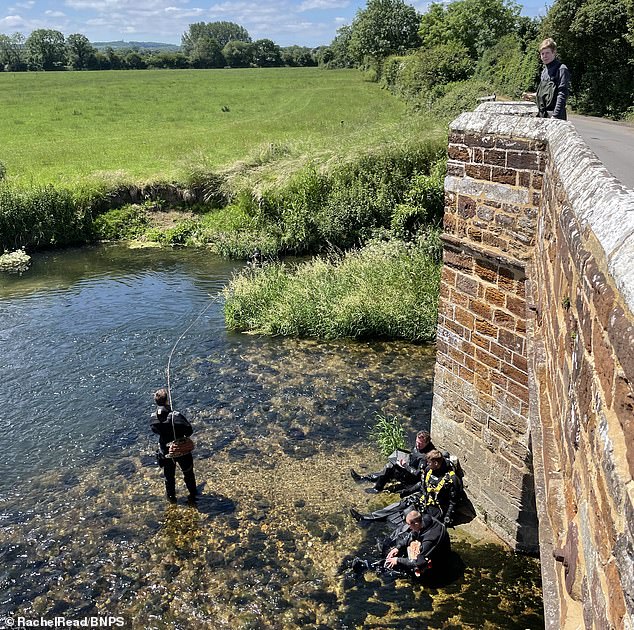 ‘Tom was lucky enough to join the dive team and three archaeological experts from Bournemouth University who were looking for other bones and trying to identify if it was modern or not.

‘The only bones that were found were animal, nothing human.

‘It was very exciting because one of the experts thought it was a river burial or a burial which the river has meandered over since and obviously we have never found any kind of human bones before.

‘They came up with a range of 450-600 AD, the archaeology departments say that they think it’s early Anglo-Saxon.’