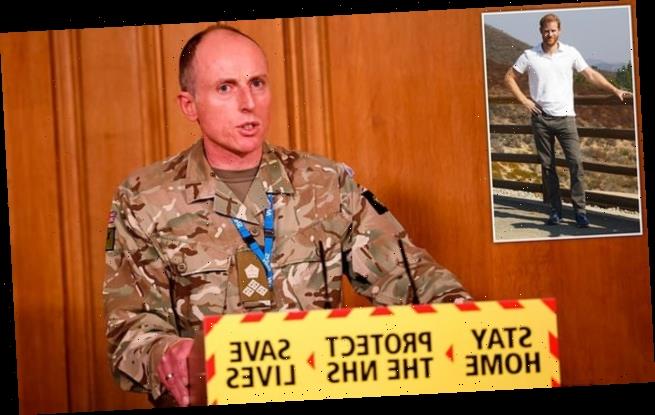 PLATELL'S PEOPLE: Harry could have earned respect as vaccine hero

PLATELL’S PEOPLE: Prince Harry could have earned our respect as an inspiring Covid vaccine hero

Dressed in military fatigues, towering over the PM with a true-grit, can-do attitude . . . what a heartening presence of booming no-nonsense Brigadier Phil Prosser was at the No 10 press conference this week.

The Army had arrived was his message, and would get the vaccine out in short order and into people’s arms. Logistics in wartime are his speciality — and goodness knows, after so many fiascos in this coronavirus nightmare, the news could not be more welcome.

When Jeremy Clarkson tweeted: ‘Can I just say how ******* reassuring it is to see the British Army is now involved in vaccine distribution,’ he spoke for all of us, though perhaps too earthily for some. 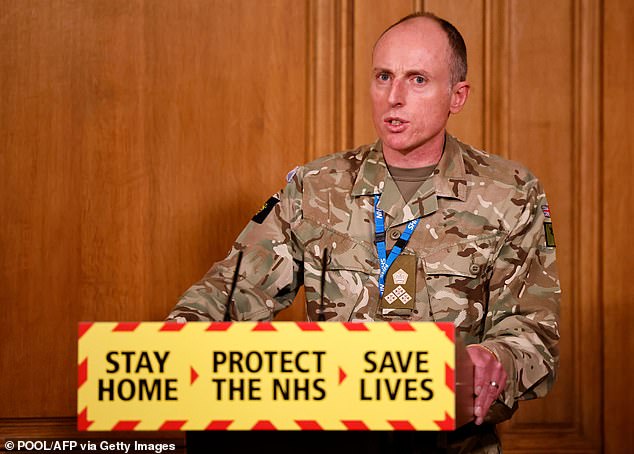 Dressed in military fatigues, towering over the PM with a true-grit, can-do attitude . . . what a heartening presence of booming no-nonsense Brigadier Phil Prosser (pictured) was at the No 10 press conference this week

And I am sure that’s the sentiment one particular former officer — ex-Captain Harry Wales — is expressing as he looks on from afar at the plight of the country he has abandoned.

Watching Brigadier Prosser, it struck me that if Harry had remained in Britain and retained his honorary military roles, he could have played such an important practical role as an Army figurehead in the battle against Covid.

A part that would have earned him admiration and popularity. As the first anniversary of his departure from our Royal Family fell this week, it seemed such a tragically missed opportunity. This, after all, is someone who thrived as a soldier and loved the privilege of leading men. A man who also has his mother’s charisma and gift for inspiring people in the bleakest of circumstances. 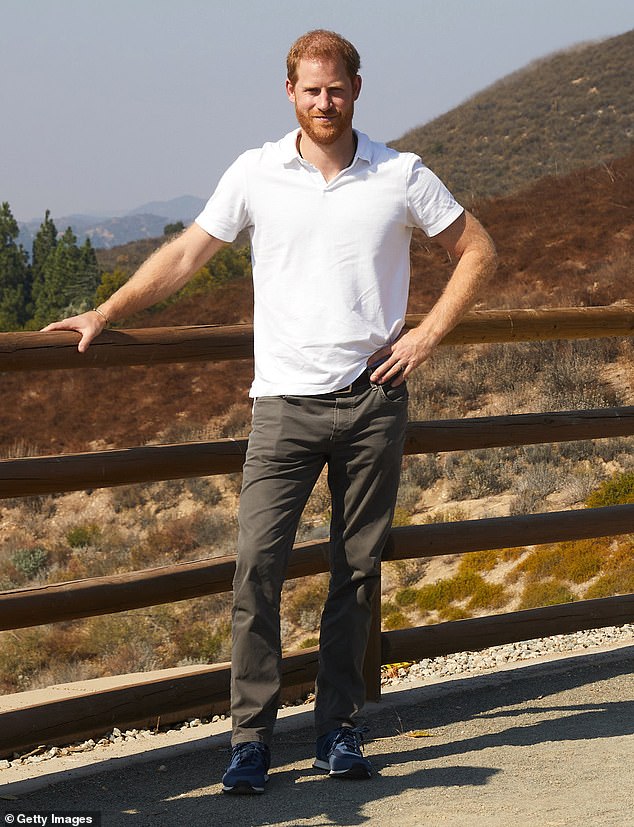 Using his royal status, he could have been a pivotal figure rallying the troops and NHS workers, helping to organise vaccine deliveries and solve other logistical problems — like Brigadier Prosser, a reassuring presence we would all be proud of. Pictured: Prince Harry shows his support for the 2020 Virgin Money London Marathon on October 3, 2020, in Los Angeles

He clearly has organisational talent, too. It is an extraordinary achievement to have created The Invictus Games for injured or sick Forces personnel and veterans.

Using his royal status, he could have been a pivotal figure rallying the troops and NHS workers, helping to organise vaccine deliveries and solve other logistical problems — like Brigadier Prosser, a reassuring presence we would all be proud of.

Instead, he is making millions in California on the back of his royal name, while preaching about compassion and telling us vacuously to imagine we are raindrops with the power to heal the ‘parched ground’ of the planet. Words are the easy part, ex-Captain Wales. It is action and duty that earn you respect.

As Neil sang, Mum knew I was sew sad

Some regret for his fans as Neil Young signs a £110 million deal to sell off 50 per cent of the rights to his songs.

They have been a rite of passage for many of us — I was just 15 and newly heartbroken by my footballer boyfriend when I first heard Harvest and my mum came into my bedroom to comfort me.

The track The Needle And The Damage Done came on my record player and Mum said soothingly: ‘Mandy, it’s lovely to hear you listening to a song about sewing.’

Swoons and spoons with Regé

Much debate, even on the cerebral Radio 4 Today programme, as to why the Netflix Regency drama Bridgerton is such a hit.

Is it simply that, in addition to his fine acting, Regé-Jean Page — aka the Duke of Hastings who enjoys a steamy relationship with debutante Daphne Bridgerton (both pictured) — is a master of swoon with a magnificently sculpted abdomen, and doesn’t mind letting us ladies know it? Crikey, in one scene he licked a silver spoon so seductively the utensil now has its own Instagram page! No wonder he’s tipped as the new 007. 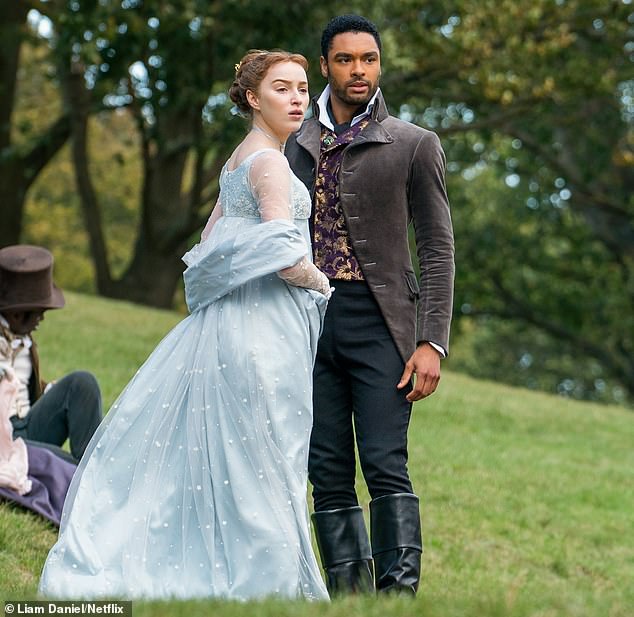 Regé-Jean Page — aka the Duke of Hastings who enjoys a steamy relationship with debutante Daphne Bridgerton (both pictured) — is a master of swoon with a magnificently sculpted abdomen, and doesn’t mind letting us ladies know it

As we learn of cruel people dumping their Covid pooches, a story to warm your heart. When self-employed roofer Duncan Flowers lost his dog Dizzy 20ft underground down a rabbit hole, he called on his mates.

One owned a JCB digger, another was a plumber who had a drainage camera and for 30 hours they dug up a paddock to free her.

It’s enough to make even the most hardened hearts go dizzy with delight.

Radio 2’s Jo Whiley was wise to have her dear departed cat GinGin immortalised in a little felt replica she can treasure. I made the mistake of having my two ginger toms stuffed by a taxidermist back in the 1990s when it was fashionable, thinking the brothers would make beautiful bookends. Reggie was fine, but Ronnie kept falling over — he only had three legs.

Is it significant that Trump’s wife Melania has been nowhere by his side this week as he stoked chaos on Capitol Hill? Has she chosen to stop indulging him in public?

With just days before he steps down, I am already missing Melania, the most vilified and trivialised, yet dignified of First Ladies. Fiercely protective of their son Barron, who was only ten when Dad got the big job, she was supremely elegant yet the opposite of self-aggrandising.

And I’d wager she isn’t going to do a Michelle Obama, pocketing $65 million by writing her memoirs — she is as unlikely to sell her soul to the highest bidder as she is to still be with The Donald in two years.

Bollywood star Priyanka Chopra escaped a hefty fine for breaking lockdown rules after going to a chic London salon to have her long hair coloured. When two police officers arrived, she provided documents proving it was essential work for a job filming her new movie.

Poor thing was interrupted after just half an hour. As any woman knows, a proper colour, wash and blow-dry takes at least half a day. 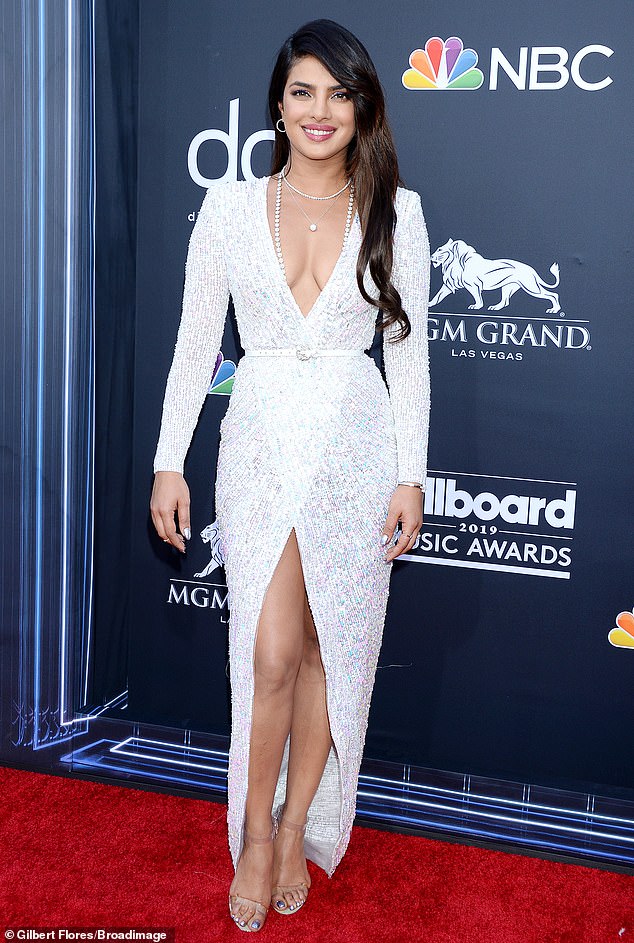 After a competition by Manchester City Council, one of their salt-spreading lorries was named Gritter Thunberg in honour of the global-warming campaigner. It has spent the week gritting icy roads as temperatures dropped to -12c in Britain. Well, Mancunians are famous for their mischievous sense of humour.

Nicole Kidman, 53, says the venerated Shakespearean actress and Bond star Judi Dench is her heroine — at 86 she takes on deep and meaningful roles and follows them with movies in which she has ‘some larks’.

Take a deep breath Nic. Meaningful roles involve an untold range of expressions — but in your last serious TV role, The Undoing, your face had less nuance and fewer creases than your designer coats.

Heiress Tamara Ecclestone is so nervous after the £25 million burglary of cash and jewellery from her 58-room West London mansion she is too terrified to leave her home.

While having the utmost sympathy, surely her husband, security team and those 50 staff should offer some solace at a time when none of us should be going out anyway.