Home » World News » Pink hair and accidental mullets: Getting through lockdown without hairdressers

Pink hair and accidental mullets: Getting through lockdown without hairdressers

Jennie Duggan started lockdown by growing out her greys, but decided she wasn’t quite ready for that, and put a pink dye through the lot instead.

It was her 50th birthday, and Ms Duggan was joining her family for a crazy-hair themed Zoom call from lockdown in her Chirnside Park home in Melbourne's outer north-east.

“I just thought, ‘oh stuff it’ and grabbed a packet literally off the shelf,” said Ms Duggan said, whose parents sprayed temporary blue and green dye through their hair.

Hairdressers have been forced to close during stage four lockdown, and will not reopen until October 26 under the plan outlined by Premier Daniel Andrews last Sunday. There are a few interesting haircuts getting around on video calls now. Overgrown beards and wonky fringes. 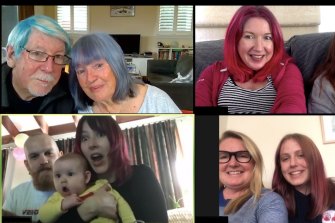 Ms Duggan’s hair — which was supposed to fade after eight washes but remains pink seven weeks later — has been a hit on her video conferences for work.

“I’d always had [going pink] in the back of my mind and thought that look is really lovely. I’ve always worked in an office. Though my job doesn’t involve dealing with the public, it’s real estate in Albert Park. You don’t want to walk in the door with pink hair,” she said. 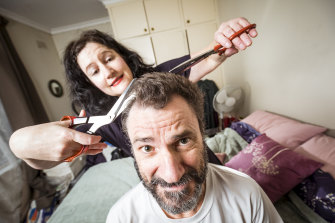 Gabrielle O’Brien and Scott McInnes have been cutting each others hair in lockdown.Credit:Chris Hopkins

Normally, she gets blonde foils done at the hairdresser. But she decided to do a permanent rose gold colour next time, using packet dye at home after her pink experiment.

“In actual fact, it’s inspired me,” Ms Duggan said. “It was the start of something new, because it’s so flattering, pink.”

Gabrielle O'Brien and Scott McInnes have had fun cutting each other’s hair.

“We go to the bathroom and hop in the bath and stand up, put a towel around our shoulders and have a lot of giggles,” Ms O’Brien said.

“It’s quite interesting when someone inexperienced comes at you with scissors. It’s harder than it looks.”

She has cut Mr McInnes’ hair once, “a little bit shorter than I anticipated”, while he’s trimmed her fringe about four times. 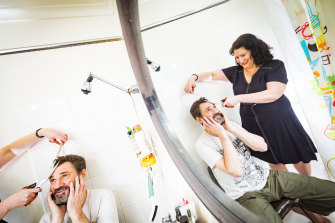 Mr McInnes said the bathtub was almost filled up with his hair after his cut about a month ago.Credit:Chris Hopkins

“It had a little kink in it, but it’s fine … I have to tell him not to cut my eyebrows, because he was getting a bit close,” Ms O’Brien said, conceding she had accidentally nipped his ears with the sewing scissors during a cut.

Mr McInnes was very happy with his chop, which will last a while.

“My hair was very long though, I hadn’t had a haircut through the whole lockdown … When she cut it all off it sort of filled the bath,” he said.

Hairdresser Jay Magee, who owns a Lonsdale Street salon called Off the Top of my Head, tried to talk a Sydney client through a haircut over a video call during the first lockdown.

“It was very difficult … The internet was poor, if you’ve got poor audio or video, you’re already behind the eight ball,” Ms Magee said.

Eventually, they got the haircut right. Ms Magee jumped off the video call when the client stopped cutting.

“Afterwards, she said: ‘I kept going after we finished and I ended up with a mullet’.”

On Friday, Ms Magee was helping a Melbourne client curl her hair by video. But she doesn’t plan on doing a cut that way again, and will talk clients down if they ask.

She’s been giving them tips to do it themselves instead.

“To be honest, I don’t care if clients go and cut their own hair. I think it’s good for people to make changes happen that wouldn’t have happened before. We all need mistakes in life to shoot us off into a different direction.”

One of her clients, Liz, who did not want her surname used, has bought trimmers to maintain her short hair during the lockdown.

“I can’t do the back of my hair very well because you can’t always see it,” Liz said.

“It’s a bit of a 'test and see' scenario, in some ways, but so far I’ve survived – a little chunk out here and there but other than that.”

Natalie Varrasso, owner of Retreat Hair in Doncaster East, who also does video tutorials, said she was getting lots of queries about how to colour hair from home to fix regrowth.