Philip Hammond wrote a ‘flattering’ letter to Saudi Arabia’s finance minister days before setting out his intention to quit as chancellor before later taking a paid adviser role to the politician.

In that letter, obtained under the Freedom of Information Act by the Sunday Telegraph, Mr Hammond described Mr Jadaan as ‘excellency’ and said he was ‘delighted’ to have met him.

Mr Hammond said it had been a ‘pleasure working with you over the past three years’ and he looked forward to ‘hearing more about Saudi Arabia’s priorities for its G20 presidency’. 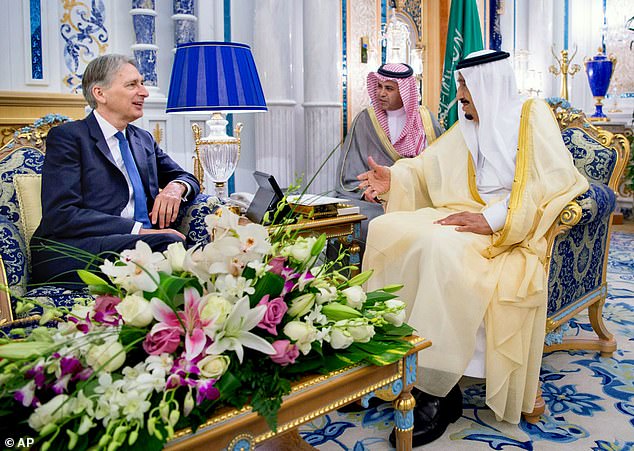 Philip Hammond took a role as an adviser to the Saudi finance minister this year. He is pictured meeting King Salman bin Abdulaziz Al Saud in Jeddah in May 2016

Three days after the letter was sent Mr Hammond announced he intended to quit as chancellor if Boris Johnson won the Tory leadership election and became prime minister.

Mr Hammond followed through on his plan to quit when Mr Johnson won the leadership.

Mr Hammond had sought advice from the Advisory Committee on Business Appointments (ACOBA) in April 2020 before taking the part time role.

ACOBA rules on whether new jobs are appropriate for former ministers and ex-civil servants.

Mr Hammond told the committee the adviser role related to Mr Jadaan’s capacity as the chairman of the Finance Track of the Presidency of the G20 and he was advising exclusively on G20 matters.

Lord Pickles, the chairman of ACOBA, said: ‘The committee has considered the risk of this appointment being perceived as a reward.

‘The committee noted you met with members of the sovereign government of the Kingdom of Saudi Arabia as chancellor, including the minister of finance.

‘However, it gave weight to HM Treasury’s confirmation you did not make decisions or take actions in office that could give rise to the real or perceived risk of reward here.’

A spokesman for Mr Hammond told the Sunday Telegraph that the letter was a ‘routine courtesy follow up’ and it is ‘basic good manners to thank someone who has just hosted you’.