Former prime minister Paul Keating has condemned the Australian government, media and security and intelligence establishment for failing to properly understand and respond to the "rise, legitimacy and importance" of China.

"Big states are rude and nasty but that does not mean we can afford not to deal with them," he told an audience at a strategic forum in Sydney on Monday. 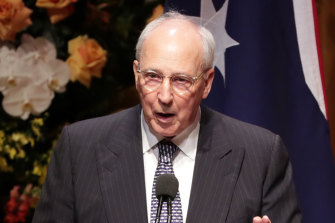 "China will be, and is, the predominant economic power in Asia … that proposition will not be usurped by a non-Asian power either economic or military [sic].

"The question for us is how does Australia respond to this. [Do we] help define and construct a set of arrangements which engages China but which prevents China from dominating the region? Or do we seek to insulate or remove ourselves from this enormous shift in world economic power by allowing our singular focus on the United States and our alliance with it to mark out our international personality?

"My concern is [that] what passes for Australian foreign policy lacks any sense of strategic realism and that the whispered word 'communism' of old is now being replaced by 'China'."

Speaking at the event hosted by The Australian newspaper, Mr Keating warned that the world had returned to a situation of chaos and that Australians should recognise that the post-War "pax Americana" was an aberration rather than the normal state of international affairs.

In dealing with China, he said that Australia should get over its alarm at the speed of its rise and recognise its achievement in lifting 700 million people out of poverty.

Noting that the West had co-operated with a single-party state in the Soviet Union in fighting Germany during World War II, he said Australia needed to accept that China would never be a Western-style multi-party democracy.

He said that Australia's government and political system had failed in developing a China policy and that the "subtleties of foreign policy and the elasticity of diplomacy are being supplanted by the phobias of a group of security agencies".

He said Australians should applaud US President Donald Trump for his instinct not to challenge China militarily but to recognise that Mr Trump would not help to construct the sort of regional diplomatic and economic architecture that would be most suitable for engaging with China.

Even if Mr Trump was defeated at next year's election, Mr Keating said he did not expect the US would regain its role as the natural leader of the world order.

Once you pawn your crown, he said, you cannot redeem it for the same value.

Stretched and Stressed by Outbreak, African Doctors Push Back