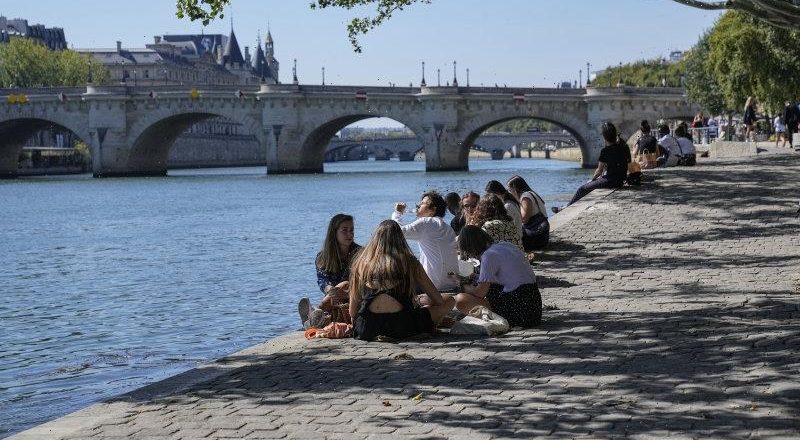 Paris: For decades, the Seine was the smelly companion of the City of Lights.

Declared biologically dead in the 1960s, the river only ever appeared to awaken when floods threatened to spill brown mud water onto the Parisian cobblestone footpaths. Advances in wastewater treatment have helped. But swimming has been officially banned since 1923. More than two-thirds of all French have a negative perception of the river.

And yet when French officials unveiled their ambitions for the 2024 Summer Olympics in Paris this month, the Seine was treated like a resurrected national monument, “the most beautiful avenue of the capital” and a place of “unlimited possibilities”. 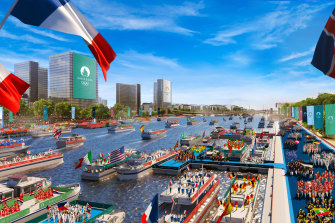 Paris 2024 organisers hope to hold a parade on the Seine to start the Olympics.Credit:Paris 2024 / Florian Hulleu

In a break from tradition, the Opening Ceremonies won’t take place in a stadium. Instead, Olympic athletes and officials will float down the river, waving from more than 160 boats, as an estimated 600,000 spectators watch from stands and streets between the Austerlitz bridge and the Eiffel Tower. In the following weeks, some athletes may not just float on the Seine, but also in it. The river is expected to accommodate the Olympic open water marathons and the triathlons. Once the athletes are gone, officials want to open the river to everyone.

According to this vision, the Olympics would celebrate a turnaround in the river’s fortunes that has been decades in the making. But getting there will still require a final sprint. To date, the Seine’s clean-up has already meant that many fish the length of dinghies have returned to the river. Authorities estimate more than €880 million ($1.37 billion) will be needed before people can safely follow. 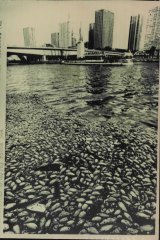 Dead fish washed up in the polluted Seine in 1976. Credit:AP

“The cities of the world are reconquering their rivers,” said Anne Hidalgo, Paris mayor and the Socialist Party’s presidential candidate.

London’s Thames similarly has gone from having been declared biologically dead to welcoming sharks, seals and even seahorses. In Berlin, activists have called for parts of the Spree river to be made swimmable.

In Paris, officials hope to cordon off areas of the Seine as river-water swimming pools, open to the public after the Olympics are over. These would include scenic spots near the Louvre, Notre Dame and the Eiffel Tower, but also in the less privileged suburbs, allowing Parisians to reclaim a long-lost but unforgotten tradition.

When Paris hosted its first Olympic Games in 1900, the swimming competitions almost self-evidently took place in the Seine, said historian Laurence Lestel. Photos taken in the following years show cyclists propelling themselves into the river off diving platforms in front of the Eiffel Tower and swimmers floating down the river on old mattresses. 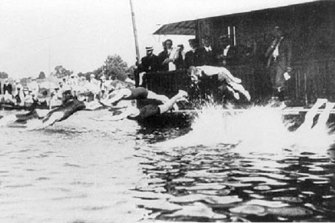 An Olympic swimming race in the Seine at the Paris 1900 Olympics.Credit:Public domain, photographer unknown

But industrialisation, along with decades of rapid economic and population growth in the capital region, turned the Seine into the big-city equivalent of a smelly pond, whose only saving grace was that its toxic waters reflected the Eiffel Tower and Notre Dame Cathedral. Almost no fish could survive in the Seine for decades, Lestel said.

As Paris mayor, Jacques Chirac repeatedly promised a clean-up, saying on television in 1990: “In three years, I will swim in the Seine, in front of witnesses, to show that the Seine has become a proper river.”

Chirac’s pledge was met with laughter.

Three decades on, authorities say the proposition is more serious. Their optimism is based on hidden, partially submerged containers that transmit real-time updates on what is flowing around them – and what isn’t.

In a brick-and-stone building in a Paris suburb, the data collected by the sensors is displayed on a large screen day and night. They include measurements of the water’s CO2 and E coli bacteria levels. These days, the Seine’s high-tech barometer often flashes in green – a sign that the river is allowing species to breathe again.

Over the past 40 years, fish species in the Seine have proliferated more than tenfold. That’s partly the result of tightening European Union rules on water quality, but also local initiatives to reverse decades of environmental degradation. 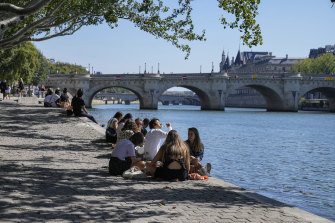 The Seine’s health has slowly been restored over the decades. Credit:AP 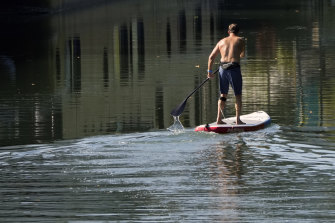 While many already paddle on the Seine, the water is not yet considered suitable for swimming under EU regulations. Credit:AP

Hidalgo has dismissed scepticism about the city’s Olympic swimming plans by saying that the water quality requirement for competitions “is not quite the same as that for daily swimming”.

She was referring to rules that tend to give competition organisers more leeway than officials in charge of public swimming venues. There were sewage and water pollution concerns at the Olympics in Rio de Janeiro in 2016 and in Tokyo this year, for example, but in both cases the competitions went ahead.

French officials insist that their goal remains to make the Seine swimmable for everyone at EU standards.