The Omicron variant is skyrocketing in the Big Apple and having a chilling effect on reservations, while stoking a debate about vaccine requirements — and whether boosters should be mandated.

As of now, most officials and employers are not forcing the issue of boosters, but Csencsitz has "encouraged everybody" to do so.

"I didn't mandate it. I'm not demanding it to as a necessity to work here as the vaccine is…you must have a vaccine to work here but it's not mandated that you have the booster," Csencsitz told Yahoo Finance Live in an interview.

"I've just encouraged everybody for all of our sake, all of their families' sake, and all of the people that they're surrounded by that everyone should get the booster," he added.

Despite not having a mandate, Csencsitz is confident staff will take proper precautions. When the surge of the omicron variant intensified in New York City in recent weeks, he says staff "were coming up to him saying 'I scheduled it'."

He added: "We saw a lot of employees schedule their booster…. I'm hoping by mid-January 80% to 90% of our staff is is boosted as well as vaccinated."

Yet similar to other U.S. cities like Boston, workers were unable to get a booster right away due to the spike in demand. According to Csencsitz, many employees could not find an appointment until January.

'Round 3 or 4 of challenges' related to COVID 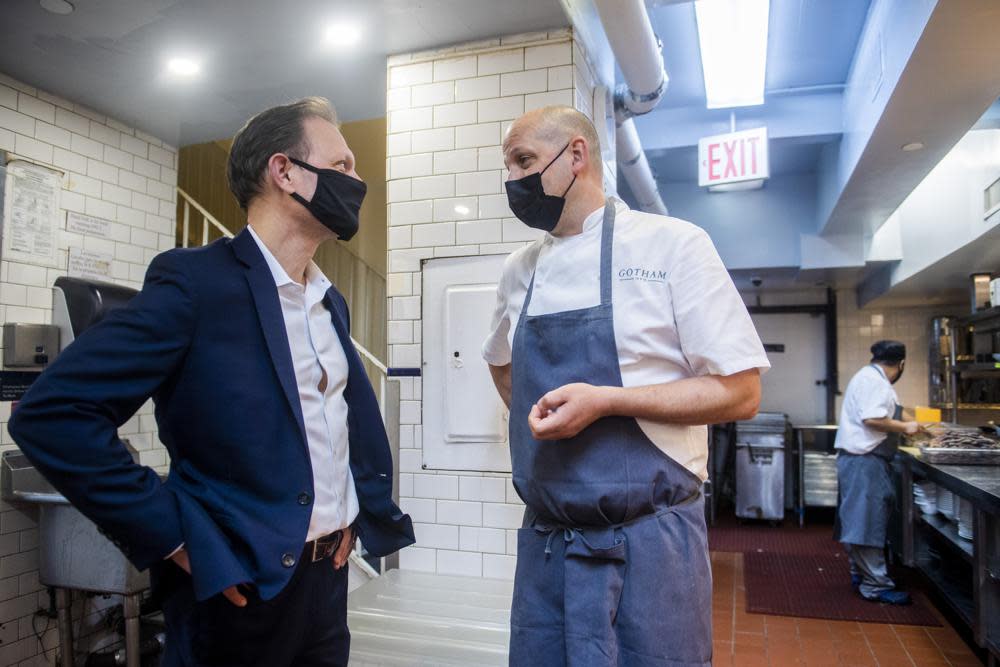 This recent surge comes only a month after Gotham reopened its doors in November 2021 for the first time since closing in March of 2020, following much uncertainty about reopening at all.

Given the labor shortage hitting the restaurant and hospitality industry, Csencsitz says the restaurant had to "restrict" its dining hours. He noted that "at the moment" the restaurant is not open on Sundays or Mondays, "simply because we don't have enough staff."

Prior to the pandemic, the restaurant had 100 people on its staff. Last month when it opened, there were 47 employees, and now there are currently 56. When the restaurant first re-opened, he says there was a lot of momentum keeping the staff on hand quite busy.

"We opened in November…we started to get some momentum," he said. But with the onset of the omicron variant, there was a stark difference.

"We saw a dramatic decrease…a lot of cancellations," the restauranteur added. During recent weeks, reservations have dropped nearly 50% lower than "where it should be at this point," which is in line with recent data from OpenTable for the state of New York.

On top of all this, inflation took a toll on the restaurants' costs to get food to make its specialty dishes.

"For instance, we had one of our fish suppliers halibut coming in at $14 a pound one week, and then the next week's at $24 and then maybe it drops to $22," Csencsitz said, with no end in sight.

"It doesn't really ever seem to get back down to what we were paying for six weeks or so from November to mid-December, and we see that across certain commodities," he added.

Csencsitz hopes the end of the pandemic impact is near, but it appears the industry is bracing for yet another round of hardship.

"I don't know what round…if this is three or four of challenges for the restaurant business," he told Yahoo Finance.

Brooke DiPalma is a producer and reporter for Yahoo Finance. Follow her on Twitter at @BrookeDiPalma or email her at [email protected]