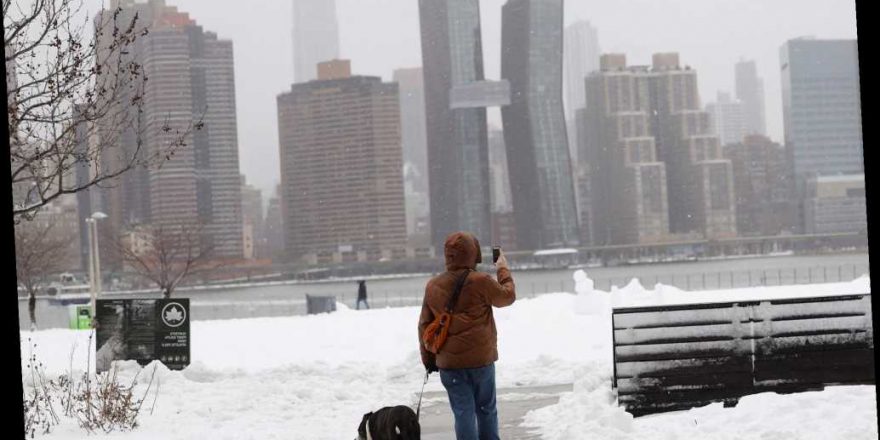 Who needs a treadmill? Shoeless runners trek through snow in Finland

New Yorkers will need to break out the snow boots and shovels yet again this week as a winter storm is set to dump up to 10 inches on the city Thursday — more than initially predicted, according to forecasters.

“It will start off as snow,” Erickson told The Post. “It’s cold enough for that. It will snow heavily at times throughout the daytime hours… Then it will begin to break up a little bit and mix with sleet and freezing rain into the evening hours.”

The heaviest snow will likely fall between 9 a.m. and 4 p.m., he said.

Six to 10 inches are predicted for the boroughs and inland suburbs, with the earlier prediction of 3 to 6 inches more likely for the Jersey Shore and out across Long Island, Erickson said.

Temperatures are expected to be in the mid-20s early Thursday, meaning the snowfall will start off as dry and fluffy.

But as temps rise into the lower 30s by the evening, the snow will become wetter, the meteorologist warned.

Drivers will likely deal with “treacherous” commutes for the duration of the storm — with the Thursday evening rush likely the worst, Erickson said.

“Tomorrow morning will have its challenges, especially for those coming in from the north and west of the city,” the forecaster said.

“The snow will begin a little earlier there by an hour or so. Already by then, the roads will be slippery and snow-covered just given how cold it’s been.”

However, conditions will be worse for the evening commute.

“I think the evening commute will be worse because we’ll be dealing with the heavy snow throughout the day,” Erickson said.

“The roads will be snow-packed and slippery even more so than the morning. Even the Friday morning commute will pose some challenges.”

But the city will only likely see “spotty, light precipitation” Friday morning, he said.

After this storm rolls out, no big storms appear to be on the horizon for the next week, Erickson said.

The city could see a bit of a rain and snow mix on Monday, but it doesn’t appear to be a significant storm, he said.

Overall, New York City has seen far more snow than it typically does by this point in the winter, Erickson said.

As of Wednesday, 33.8 inches had fallen in Central Park since the start of the snowy season late last year. The average is 17.8 inches, he said.