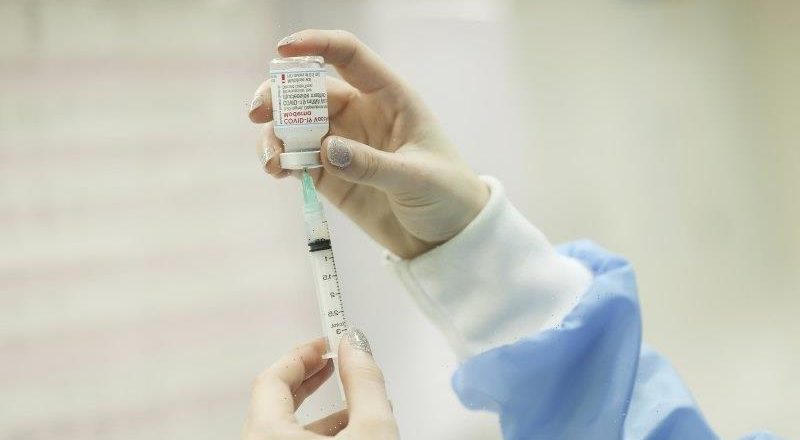 NSW has reported 608 new local coronavirus cases, as well as seven additional deaths from the virus.

“We’re seeing a decline in case numbers in recent days, but we’ve also seen a slight decline in testing,” NSW Health’s Dr Jeremy McAnulty said, while encouraging people to continue to look out for respiratory symptoms even as vaccination rates increased. 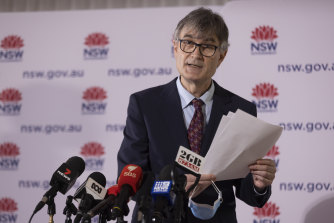 NSW Health’s Dr Jeremy McAnulty says there has been a slight decline in testing.Credit:Anna Kucera

According to NSW Health, 67.5 per cent of people aged 16 and over are fully vaccinated and 88.5 per cent have received a first dose of a COVID-19 vaccine as of Monday morning.

Five were not vaccinated and two had received one dose.

With NSW due to hit 70 per cent double-dose coverage within days, some Sydney councils already have more than 80 per cent of their adult population fully vaccinated.

According to data released by the federal government on Monday night, just under 85 per cent of people in the Hills Shire, in north-west Sydney, have received both doses of a COVID-19 vaccine, up from about 77 per cent the previous week.

There are 978 COVID-19 cases admitted in hospital as of Tuesday, including 190 in intensive care, 94 of whom require ventilation.

Of the 190 people who are in intensive care, 136 are not vaccinated and 39 people have received one dose of a COVID-19 vaccine, Dr McAnulty said.

He said the Sydney suburbs with the highest case numbers reported yesterday were all in the city’s west: Casula, Liverpool, Bankstown, Punchbowl, Ashcroft, Minto, Granville and Guildford.

Overall, cases in western Sydney are continuing to decline. There were only 98 new cases reported across Western Sydney Local Health District on Tuesday, although 183 were reported in the adjacent South Western district.

But authorities remain concerned by the spread of the virus in regional areas.

There were 65 new cases reported in the Hunter-New England area on Tuesday. Twenty-seven were in the Lake Macquarie local government area, across 18 suburbs. Twelve were in the Maitland area and eight were from Newcastle.

Fifty-one new cases were reported in the Illawarra area, including 34 in Wollongong.

Dr McAnulty highlighted Jindabyne, in the state’s south, as a place where health authorities were concerned about COVID-19 transmission: seven new cases were reported in Jindabyne among 19 recorded across southern NSW.

“No matter where you are in NSW, it’s important to come forward for testing as soon as you get the mildest symptoms,” he said.

Every council area in NSW has now achieved 70 per cent first-dose coverage of its population aged 15 and over.

Byron Shire, in the state’s north, had a notable increase in uptake – the area’s first-dose rate grew from just under 67 per cent to 72 per cent in one week.

The City of Sydney also passed the 70 per cent milestone in the past week. At 71.4 per cent, the council’s vaccination rate is the lowest in the state, although experts have posited this could be attributed to changing population data.

Non-urgent day surgery can resume in all NSW private hospitals from Tuesday, following a decision by the ministry last week.

The change will see procedures including hand surgery and ENT surgery allowed to recommence at 19 large private hospitals, which previously were directed to scale back their workload, so they could assist with the pandemic effort.

Although the number of hospitalised cases is declining, COVID-19 clusters are continuing to grow within some western Sydney hospitals.

A spokesperson for South Western Sydney Local Health District said the cluster across four wards at Liverpool Hospital was now at 35 cases, including 30 patients. Two patients in the hospital’s orthopaedics ward, a man in his 60s and a woman in her 90s, died last week.

The cluster at Campbelltown Hospital, which began when a patient was transferred from Liverpool, is at 20 cases, including 16 patients. Three people have died, including a man in his 60s whose death was announced on Monday.

As previously reported, a woman in her 60s whose death was announced on Monday was the second death associated with the Mount Druitt dialysis unit.

Stay across the most crucial developments related to the pandemic with the Coronavirus Update. Sign up for the weekly newsletter.