Home » World News » Not so fast: Woman says Judy Garland’s ‘Wizard of Oz’ dress, about to be auctioned, belongs to her

Not so fast: Woman says Judy Garland’s ‘Wizard of Oz’ dress, about to be auctioned, belongs to her

Washington: Not long after a lecturer at Catholic University discovered a blue gingham dress worn by actress Judy Garland in the 1939 film The Wizard of Oz, the university decided to sell it at auction, for an estimated price of $US800,000 ($1.15 million) to $US1.2 million.

The proceeds would go to the school’s drama department, whose founder and longtime chairman, the Rev. Gilbert V. Hartke, received the dress as a gift in 1973. 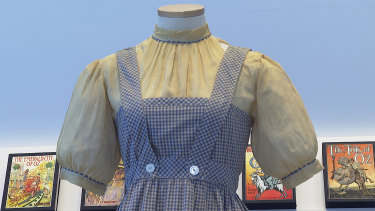 A blue and white checked gingham dress, worn by Judy Garland in the “Wizard of Oz,” Credit:AP

The 16-year-old Garland wore multiple blue gingham dresses with white blouses during the filming of the movie in 1938; a curator at the Smithsonian’s National Museum of American History said last year that there are six authenticated dresses, each with Garland’s name and a wardrobe number written in it.

Experts later determined that the Catholic University dress was worn during the terrifying (to some) scene in which Dorothy is captured by the Wicked Witch of the West in the witch’s castle.

But after the dress was displayed at a New York auction house last month, Barbara Ann Hartke emerged. An 81-year-old retired schoolteacher from Lake Geneva, Wisconsin, she is the niece of Gilbert Hartke, who died in 1986.

She says the dress is hers, as Hartke’s closest living relative, and she filed a federal lawsuit in New York last week seeking to stop the auction and claim the dress.

Barbara Hartke could not be reached for comment Friday. But she told The New York Post last week: “I was just surprised after all this time, here it had been found, and here it is being rushed off to the auction house. I just want to know who has ownership over this . . . I’d like to see the documentation.” 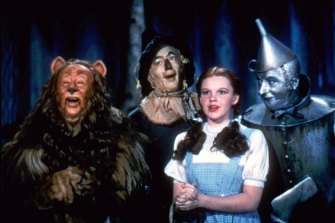 With Bert Lahr as the Cowardly Lion, Ray Bolger as the Scarecrow, Judy Garland as Dorothy, and Jack Haley as the Tin Woodman, the stars of “The Wizard of Oz” sing together in this scene from the 1939 MGM classic film.Credit:AP

Lawyers for the university responded in a filing on Thursday that the dress was donated to Catholic University, that Gilbert Hartke had no intention of claiming it for himself and that his vow of poverty as a Dominican priest prohibited him from accepting gifts in his personal capacity.

The university said that it hadn’t been served with the lawsuit or request for an injunction on the auction, but that “witnesses, including a descendant of one of Father Hartke’s siblings, have come forward confirming that the dress was never part of Father Hartke’s estate and was always owned by the University.” 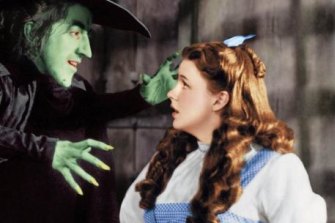 Judy Garland as Dorothy, with Margaret Hamilton as the Wicked Witch of the West.

The dress is scheduled to be displayed in Los Angeles May 20-24 by Bonhams, the auction house in charge of selling the item, and then sold on May 24. Also up for sale by Bonhams that day will be a suit worn by Steve McQueen in The Getaway (estimated price $US10,000-$US15,000) and a pair of pants made for Marlon Brando in The Young Lions (estimated price $US800-$US1200).

Bonhams is also named as a defendant in Hartke’s suit. The company declined to comment on Friday.

The last time one of Garland’s gingham dresses from the movie sold was in 2015, for $US1.5 million.

The donation of the dress to Catholic in 1973 was a news-making event, in part because it was donated by Oscar-winning actress Mercedes McCambridge, who was then an artist-in-residence at the school’s drama department. McCambridge had been close to Garland, and both had endured drug and alcohol addictions. Garland died in 1969 at the age of 47.

In an article in the school newspaper, The Tower, McCambridge said that Garland “often spoke of college and ‘how it all could have been different’ if she had made it there”.

The legal filings from both sides state that Gilbert Hartke was a renowned figure who guided actors such as Jon Voight and Henry Gibson and helped counsel McCambridge with her substance abuse problems.

In honor of Garland, McCambridge donated the Dorothy dress to Hartke and Catholic in hopes that it would be “a source of hope, strength and courage to the students,” the Tower article stated.

The dress eventually disappeared, apparently passed from Gilbert Hartke to Thomas Donahue, a now-retired drama professor, who left it for lecturer Matt Ripa. It got stashed atop a row of faculty mailboxes, and Ripa happened to discover it last year.

Barbara Hartke’s lawsuit focuses on the personal relationship that her uncle had with McCambridge and says that the dress was a gift “to thank Hartke for his counselling and support.” Hartke argues that there is no documentation that the dress was ever formally or informally donated to the university, and that Catholic made no effort to contact her before putting it up for sale.

Barbara Hartke’s attorney, Anthony Scordo III, did not respond to a request for comment. Hartke told the New York Post: “I met Mercedes McCambridge a few times and my memory is mostly of her fondness for Uncle Gib. He helped her battle alcoholism. . . . That was the idea, that this was gifted to Gib from her out of deep appreciation.”

The lawyers for Catholic University, Amin Al-Sarraf and Shawn Brenhouse, noted in a letter to the federal court in New York that the university “has an unrebutted presumption of ownership through possession of the dress for nearly 50 years,” as well as the apparent lack of claim to any personal or real property by Gilbert Hartke at the time of his death. They note that Hartke never took the dress home, even after he retired in 1974.

“The University’s research of contemporaneous sources and the evidence,” Al-Sarraf and Brenhouse said in a statement Friday, “fully demonstrates Ms. McCambridge’s intent to donate the dress to support the drama students at Catholic University. The complaint provides no evidence to the contrary . . . Fr. Hartke’s estate does not have a property interest in it.”

After the dress was found, Catholic University said it would preserve it in its special collections. But later, the school decided to sell it.

“While parting with this dress is bittersweet the proceeds are going to help support future generations training for professional careers in theatre,” Jacqueline Leary-Warsaw, dean of the Benjamin T. Rome School of Music, Drama and Art at Catholic, said in a statement published by Bonhams. “It might just be that the funding helps to prepare the next Mercedes McCambridge or Judy Garland!”