London: Boris Johnson's government acknowledged its COVID-19 testing program is coming under strain, amid reports of tests being unavailable even where they're most needed in the country's biggest virus hot-spots.

"This is challenging," Home Secretary Priti Patel told Times Radio on Tuesday. "There is no magic solution to say this is all going to be perfect." 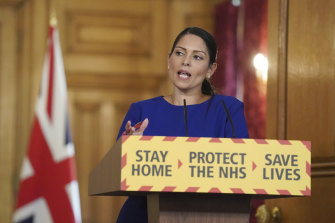 Britain’s Home Secretary Priti Patel says there is “no magic solution” to strains on COVID-testing regime.Credit:AP

Despite the Prime Minister's pledge to build a "world-beating" testing system, the UK has struggled to cope with growing demand as cases surged in recent weeks. On Monday, LBC Radio reported there were no walk-in, drive-through or home tests accessible online in the 10 worst-affected virus areas, including Bolton, Salford, Bradford, Blackburn, Oldham, Preston, Pendle, Rochdale, Tameside and Manchester.

Scottish First Minister Nicola Sturgeon also expressed concerns about a backlog of novel coronavirus test results which was starting to affect the swift reporting of the state of the national outbreak.

"We now have a very serious concern about the backlog of test results being faced by the UK lab network," Sturgeon told reporters. "This apparent delay in turnaround is causing us concern."

Fixing the testing crisis is an urgent challenge for Johnson, as a successful program is essential for giving employees the confidence to return to work and to keep schools open. Yet the problem is also reminiscent of the early days of the pandemic, when a lack of capacity forced a halt to testing in the community — a decision which officials have since said contributed to the virus's rapid spread, ultimately triggering a national lockdown.

The government has ramped up testing significantly since April, with official capacity reaching 375,000 per day. But the number of tests actually carried out consistently falls well below that figure — in part due to a shortage of laboratory staff.

Johnson has said he wants testing capacity to reach 500,000 a day by the end of October, and on Tuesday — with some newspaper front pages focused on the crisis — Patel defended the system, saying more tests are being made available every day.

"We are growing our laboratory capacity," she said. "We have recently announced new facilities and new technology to process results even faster."

Meanwhile, Patel said that she would call the police to report anyone who flouted a new ban on gatherings of more than six people, suggesting that people who stopped for a chat on the street were breaking new coronavirus laws.

COVID-19 cases across the UK have risen sharply in recent weeks, prompting the government to bring in the new rules to restrict socialising, at the same time as health bosses have said there are problems with accessing tests.