People identified as having been in close contact with someone who has tested positive for coronavirus will not be told who has named them when they are asked to self-isolate for two weeks.

The NHS Test and Trace programme launched yesterday and requires people who develop symptoms to self-isolate for seven days and to order a test.

If they test positive for the disease they must then hand over phone numbers and email addresses for people they have interacted with in recent days.

Those people will then be contacted and told that they must go into quarantine for 14 days – but they will not find out who originally tested positive.

The need for secrecy has been partially blamed on a fear of reprisals from people angry at being told to stay at home and potentially losing out financially if they are unable to work.

But there are concerns that not revealing who has named someone could leave the system open to abuse in the form of pranks or people maliciously reporting someone they have not come into contact with. 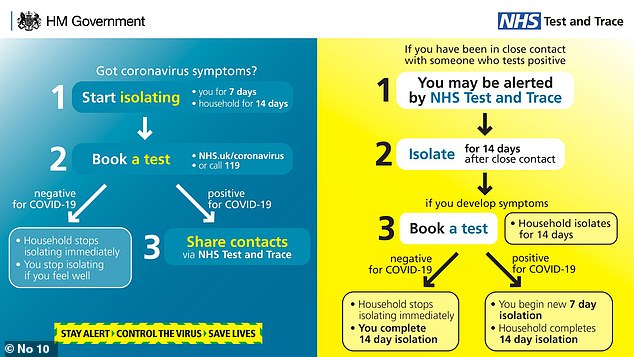 HOW NHS TEST AND TRACE WORKS

The NHS Test and Trace programme will be split into two parts. They are:

Step One: Isolate. When someone gets symptoms they should self-isolate for seven days. Anyone in the same household should do the same.

Step Two: Test. They should order a coronavirus test online or by calling 119.

Step Three: Results. If a test is positive they must complete seven days in isolation. Anyone in the same household should complete 14 days. If it is negative no one needs to isolate.

Step Four: Contacts. People with a positive test will be contacted via text or email or by phone and told to answer questions and share phone numbers and email addresses for close contacts.

Step One: Alert. People flagged will get a text or email. They will then be told what they need to do.

Step Two: Isolate. They will be asked to self-isolate for up to 14 days based on when they last came into contact with the person. Other household members do not need to self-isolate unless symptoms are present.

Step Three: Test. If they develop symptoms all other household members should self-isolate. They should then order a test. If it is positive self-isolation must continue for seven days. If negative you must still complete 14 days in case the virus is not yet showing.

Those people who are contacted by NHS Test and Trace will only be told that they are a ‘significant contact’ of someone who has tested positive.

People who test positive will be told to share the contact details of anyone they have spent more than 15 minutes with at a distance of less than two metres in the absence of protective screening.

Call handlers have been given scripts on how best to deal with people who take the news that they need to self-isolate badly.

They have been told to ‘stay calm’ and try saying things like ‘I can hear that you are angry’ and ‘I am trying my best to help you’.

NHS Test and Trace has launched without a new contact tracing app which will digitally record who people have been in close contact with.

That means the current system is entirely reliant on human testimony, prompting fears it could be abused or manipulated.

Michael Veale, lecturer in digital rights and regulation at University College London, told The Telegraph: ‘It is a real possibility and you have to have trust that people will not do that.

‘The concern is that if that happens to some people then everyone might start to doubt whether or not their instruction to isolate was valid or not.’

The programme’s definition of a close contact and the fact social distancing rules remain in place means that most people are likely to know who may have reported them even if they are not told by officials.

Concerns had been expressed that the data revealed during the process could be passed onto the police to crackdown on non-compliance with lockdown rules.

For example, if someone has visited a friend’s house during lockdown but is then flagged as a contact for a positive test and they then have to reveal their rule breaking.

But Dido Harding, executive chair of NHS Test and Trace, said ahead of the launch that all data will always be ‘entirely confidential’.

The programme got off to a chaotic start yesterday as some staff struggled to log onto the system with one calling it a ‘complete shambles’ after revealing they had not even received their password to access the website and start their shift.

There were also claims from doctors that the system had crashed although this was denied by Downing Street.

NHS chiefs also warned ‘key bits’ of the system are not yet operational and it cannot yet be described as ‘world class’.

Health Secretary Matt Hancock insisted it was right to press ahead with the launch without the NHSX app.

He said it was important to ‘get people used’ to the principles of the programme. 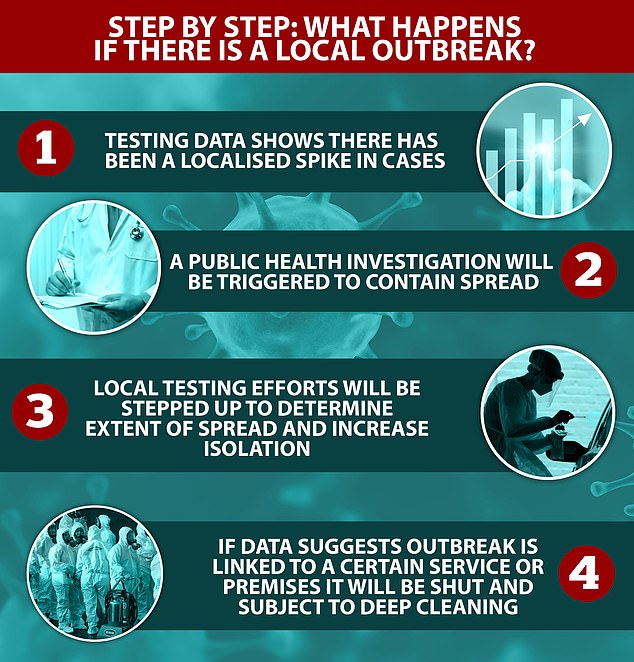 The Government remains unable to say exactly when the app will be rolled out nationwide after a problematic trial on the Isle of Wight.

Under the programme anyone with symptoms will immediately self-isolate and book a test, either at a testing centre or delivered to their home. Their household should start a 14-day isolation period too.

If the test proves negative, everyone comes out of isolation.

But if the test is positive, NHS contact tracers or local public health teams will call, email or send a text asking them to share details of the people they have been in close contact with and places they have visited.

If the contacted person does then develop symptoms all other household members should self-isolate. They should then order a test and if it is positive self-isolation must continue for seven days.

If it is negative they must still complete 14 days in case the virus is not yet showing.