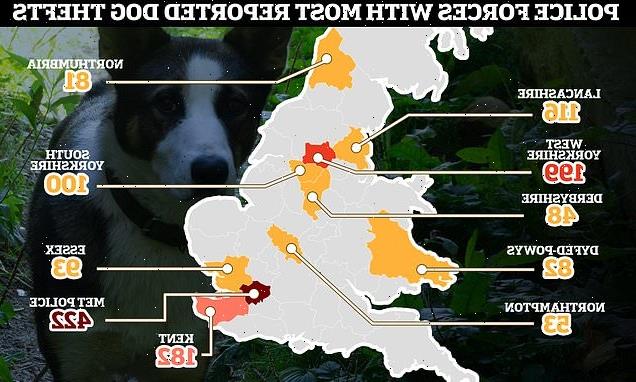 Is YOUR area a dog napping hotspot? New map reveals where most dogs are stolen as French Bulldogs and Jack Russell Terriers are revealed as most at risk breeds

A new map has shown the UK’s dog napping hot spots – as French Bulldogs and Jack Russell Terriers are revealed as the most at risk breeds for being stolen.

Dog thefts in the UK jumped to a seven-year high of 2,760 last year, the equivalent of eight pets being snatched every day and a 16 per cent rise from 2015.

A total of 45 French Bulldogs were stolen last year, up 29 per cent on the previous year, while a further 24 Jack Russells were also taken – a 140 per cent rise on the ten recorded in 2020.

Other smaller breeds such as Chihahuas, Pugs and American Bulldogs were also highly sought after among criminals, according to new figures revealed under a Freedom of Information request and compiled by Direct Line Pet Insurance.

Staffordshire Bull Terriers were previously the most popular target breed for thieves, but dropped to seventh last year following an 88 per cent fall.

London was the UK’s hotspot for dog thefts, with 422 incidents reported to The Metropolitan Police last year, more than double the next highest areas of West Yorkshire and Kent. 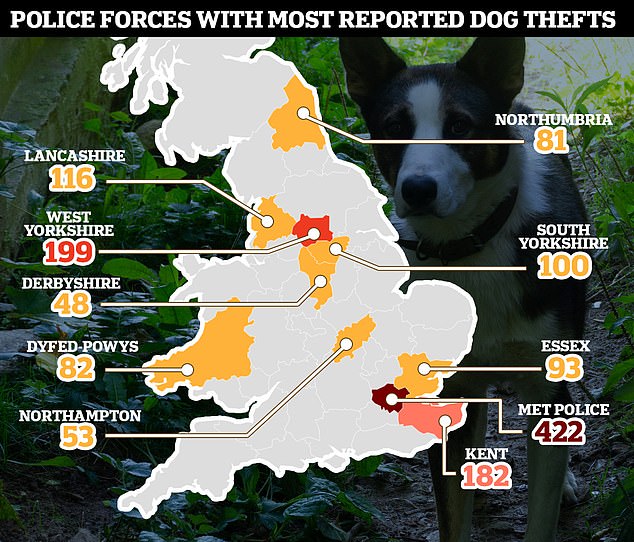 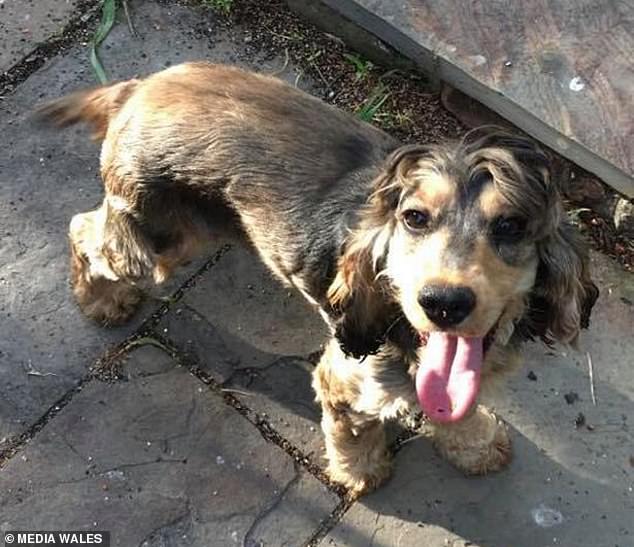 Norfolk Constabulary, however, had the greatest success at returning dogs – reuniting 25 out of the 29 reported stolen with their owners.

It comes after the Covid pandemic saw a boom in the puppy market, with 3.8 million people choosing to get a dog during lockdown.

However, the demand has led to a rise in the cost of pets, with pedigree French Bulldogs now fetching upwards of £3,000 – making them a lucrative target for criminals.

Madeline Pike, a Veterinary Nurse for Direct Line Pet Insurance said: ‘It’s devastating to see the number of dogs stolen continues to increase across the country.

‘Unfortunately, the increase in dog ownership since the pandemic began and the subsequent rise in prices of these animals seems to make the crime even more appealing to thieves.’

‘The law will soon recognise dogs as members of the family with feelings, not just owned property and we hope that this will deter criminals, especially if they can be punished more severely if prosecuted.’

Ms Pike advised owners to take precautions such as seeing a puppy they plan to purchase with its mother to ensure they are not buying from a criminal organisation, and once in possession of an animal not to leave it tied up outside a shop, or leave it inside an empty car.

‘It’s also vital to keep microchipping contact details up to date in case your dog does go missing and is handed in’, she added.