The 2022 NCAA women's basketball tournament broke a nearly two-decade-old attendance record, with more fans attending first- and second-round games this past weekend than ever before, the NCAA said.

That previous record was set in 2004, when opening-round sites were pre-selected with a view toward maximizing attendance, while also removing home-court advantage for higher-seeded teams.

In 2022, at the first tournament since 2019 not significantly impaired by the COVID-19 pandemic, the NCAA got the best of all worlds. Raucous home crowds filled arenas in unprecedented numbers. And underdogs still silenced some of them.

No. 10 seed Creighton stunned No. 2 Iowa at a sold-out Carver-Hawkeye Arena.

Five higher seeds, including No. 2 Baylor, fell on their home floors. Belmont (12) and Princeton (11), playing at Tennessee and Indiana, respectively, nearly made it six or seven.

Even in defeat, though, the crowds became a prominent story. Iowa star Caitlin Clark called Sunday "a wonderful opportunity" for women's basketball.

"It’s a little surreal," Creighton coach Jim Flanery said of the atmosphere in Iowa City. "I’m getting closed to old, so I’ve been around long enough to have metal lockers, and be in a bigger shared locker space, and not have any of the bells and whistles that we currently have."

He approached Iowa coach Lisa Bluder before their second-round game and said: "This is incredible. This is a great tribute to you, and your staff, and your program." 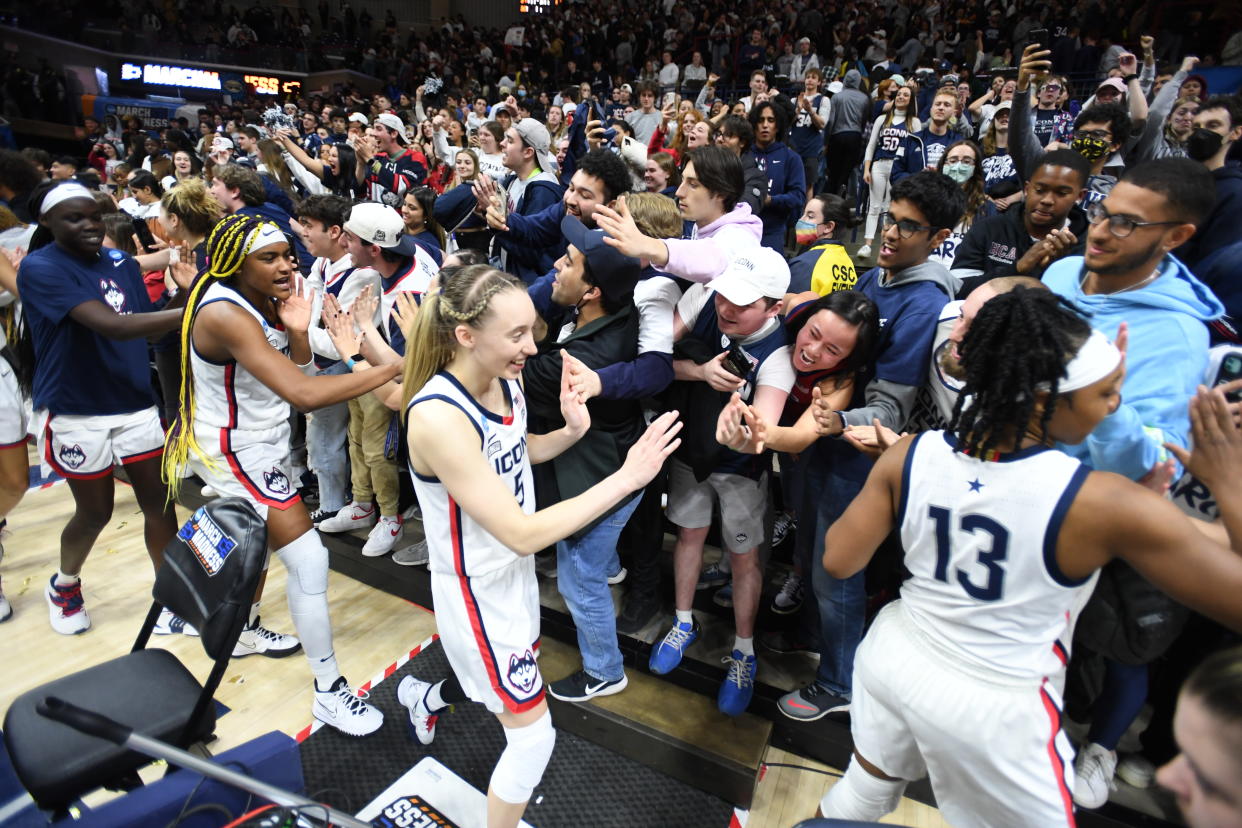 Women's basketball attendance and viewership have been rising across the board. The 2018-19 season, the last one pre-pandemic, had broken the 8 million fan barrier across all Division I games for the first time. The virus halted momentum, but the 2022 postseason has proven that growth can persist. The Big Ten tournament set an attendance record. March Madness is the latest proof.

The attendance record comes amid an ongoing debate about moving all NCAA tournament games to neutral sites, as the men's tournament has done for decades. Supporters argue that the men's model could facilitate more upsets, and introduce the sport to more casual fans across the country.

But awe-inspiring environments this past weekend are evidence in favor of the current model, which was also the original model.

From its inception in 1982 until 2002, the NCAA tournament took first- and second-round games to the campuses of top seeds. Attendance grew steadily, from roughly 2,000 spectators per game in early years to 6,630 in 2002.

In 2003, the NCAA began predetermining hosts — but still allowing teams like Tennessee to play on their home courts. It briefly moved from 16 opening-round sites to eight in 2005, but a couple years later, attendance had dipped. Even when the 2003 model was restored in 2009, crowds hovered in the 4,000-per-session range.

The predetermined-location procedure allowed for advanced selling of tickets, and long runways for preparation and promotion. The top-seeds procedure, on the other hand, often left schools scrambling to attract fans in just a few days between Selection Monday and the start of the first round.

But the old model took games away from passionate fan bases eager to cheer on their teams in the biggest games of the year — but not willing to travel long distances to do so. The NCAA restored the current model in 2015. Slowly but surely, attendance began to rise again, from 142,860 total fans in 2016 to 169,595 in 2019.

The pandemic then shuttered the 2020 tournament, and forced the 2021 edition to a bubble in San Antonio. But in 2022, the trend continued as if uninterrupted. For single second-round games, there were 9,627 fans at Indiana; 9,817 at South Carolina; 10,167 at UConn; 10,414 at Louisville; and the 14,382 at Iowa, which broke the single-site record for opening-weekend attendance.

Decibel levels reportedly hit 114 during a frantic fourth quarter in Iowa City. The noise blared through TV screens on ABC.

"Walking out of the tunnel and seeing that many people is almost unexplainable," Iowa center Monika Czinano said after the defeat. "It fills you with joy, and it makes the game so fun, and it fuels you."

"That was the most special environment I’ve ever played in, by far," Creighton's Payton Brotzki said afterward. "It’s really, really special for the sport.”